Depending on the system of classification you use, between 49 and 160 different ethnic groups live in Laos, with 82 distinct languages. The concept of ethnicity is difficult to pin down and there is an element of politics in attempt to categorise people into one particular group or another. The only point of certain as regards the population of Laos is that this an exceptionally diverse nation with a wide of people having a historical claim to citizenship of Laos and ownership of the land within its borders. 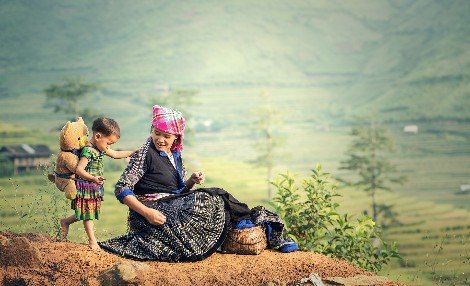 The Hmong people are the third largest ethnic group in Laos

The most numerous group of people in Laos are the ‘Lao’ people, sometimes referred to as the Lao Lum (lowland Lao). The Lao Lum are the most numerous ethnic group in Laos numbering around 3.5 million (53% of the total population). The Lao Lum people often self identify themselves as being Thai-Lao and share a common language with around 40 million ‘Isan’ Thai people who live within Thailand’s borders. The next biggest group of people in Laos are the Khmu who are considered to be the original inhabitants of Northern Laos. There are over 700,000 Khmu people in Laos (11% of the total population) and the dominant group amongst the cluster of ethnic groups referred to Lao Theung (highland Lao). The Khmu have their own religious beliefs in spirits and witchcraft, which are mixed to varying degrees with other mainstream religious beliefs such as Buddhism and Christianity. The Khmu people speak a different language which is derived from the languages of the Mon and Khmer people of Cambodia and Thailand. The third largest group in Laos is the Hmong people of which there are over 600,000 in Laos (9.2% of the Laotian population). The Hmong are the most numerous of a third grouping in Laos known as the Lao Soung (upper mountain people). Like other Lao Soung groups, the Hmong mostly inhabit the higher elevation of 1,000 metres or above. The Hmong and other Lao Soung tribes are considered to be much more recent settlers in Laos than the Lao Lum or Lao Theung and that they therefore have a less legitimate claim to be citizens of Laos or owners of the land which they inhabit. Hill tribes in neighbouring Thailand are treated in much the same way.

Next read about the French influence on Vietnam