Bus times & tickets – Vientiane to the Plain of Jars

By bus it takes 11 hours to travel 427 km by road from Vientiane to a bus station near Phonsavan in Xiangkhouang Province, which is located on the famous Plain of Jars. Lao Airlines and Lao Skyway also fly to Xiangkhouang. The flight time is 30 minutes and a return flight (one-way tickets are not available) cost around $300 USD.

There is a single bus service a day from Vientiane to Xiangkhouang which is available to book online.

Use the Search Form to purchase your bus tickets from Vientiane to Xiangkhouang.

Bus Services from Vientiane terminate at Xiangkhouang Bus Station which is located near Phonsavan town.

About The Plain of Jars

The Plain of Jars is a mysterious and difficult to reach place famous for the thousands of large stone jars scattered across the valleys and hills of the Xiangkhoang Plateau in cluster of up to 400 jars. These solid rock jars range in size from 1 to 3 metres in diameter and are believed to be 2,000 to 3,000 years old. Only a few of the sites where the jars are clustered are safe to visit as the Xiangkhoang Plateau was heavily bombed by the United States Air Force in the 1960s and 1970s leaving many millions of potentially explosive bombs littered across the area which pose a very real danger to anyone entering area which have not been cleared of any unexploded ordinance. 7 sites are considered safe for visitors. 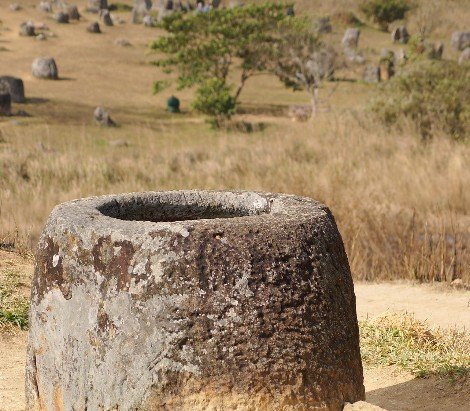 The Plain of Jars is in Xiangkhouang Province

There are a number of different theories as to who made these giant stone jars and for what reason. The predominant theory is that these jar where used as burial chambers, and the practice of using jars for this purpose has also been documented in other parts of the world, particularly amongst the ancient people of the South of India. Other theories include the jars being used to collect water to be used by merchants on a ancient trade route which ran across the Xiangkhoang Plateau and the local legend that the jars were used by a race of giants that once inhabited the plateau to brew rice whiskey. As the bomb clearance continues and more sites are examined further evidence may come to light providing a clearer explanation of who made these jars and why they did so. Until that time anyone lucky enough to visit is free to make up their own mind.

Next read about Train travel from Yangon to Bagan