The ‘Old Bridge’ as it is referred to locally spans the Nam Khan River in Luang Prabang, Laos. 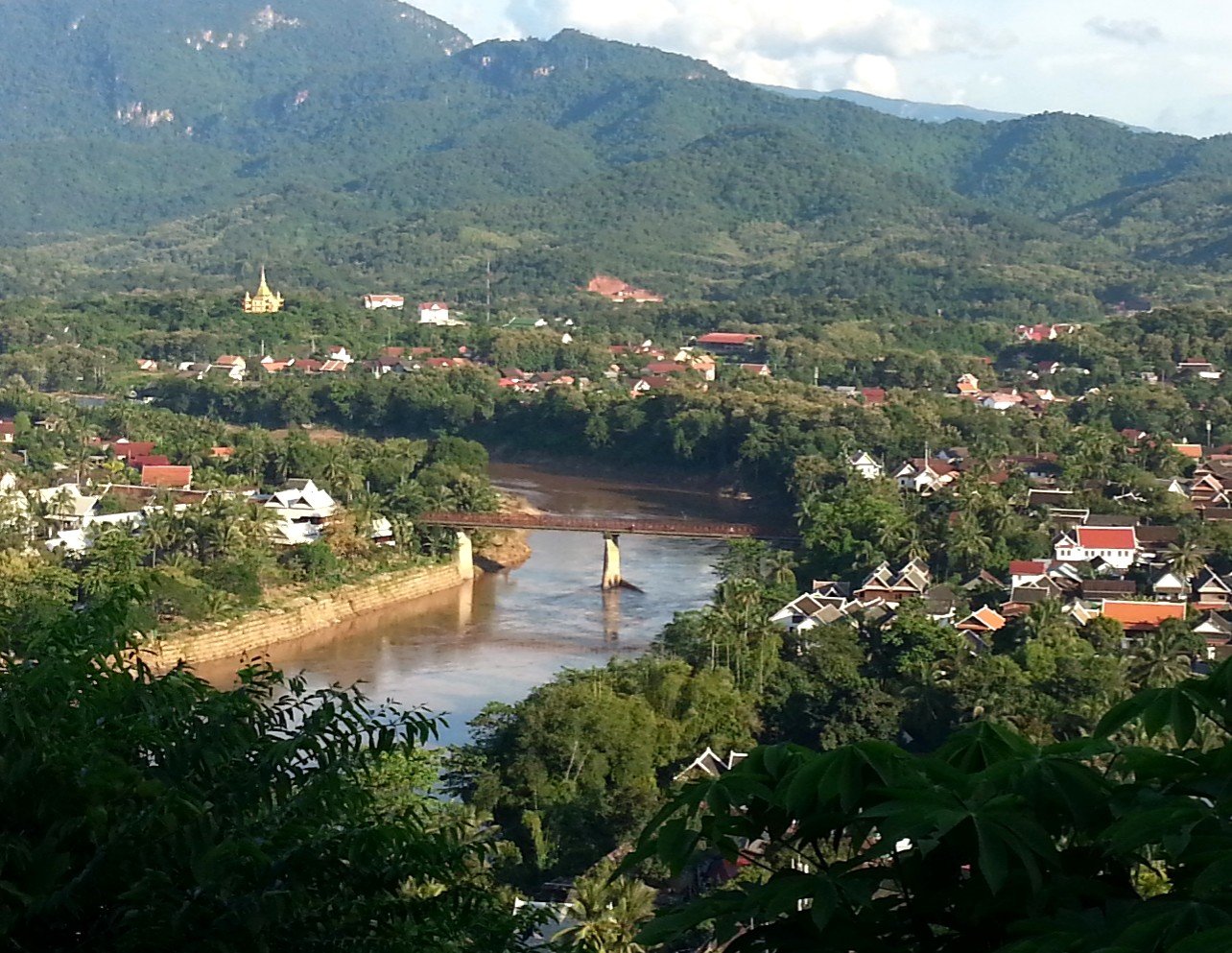 The Old Bridge, which is in a state of decay, is a tourist attraction in its own right, with visitors to the city crossing the bridge partly because it’s slightly dangerous to do so and partly because of the views along the river which you get from the centre of the bridge.

About the Old Bridge

Luang Prabang’s Old Bridge dates back to the 1920s when the French colonial government of Laos began investing in the country’s infrastructure to try and improve trade links between the largely inaccessible interior of Laos and the more developed French colony in neighbouring Vietnam. At the time France was at the start of power struggle with Thailand over control of Laos and the French view was that improving Laos’s economy by upgrading its infrastructure would benefit France’s regional interests. 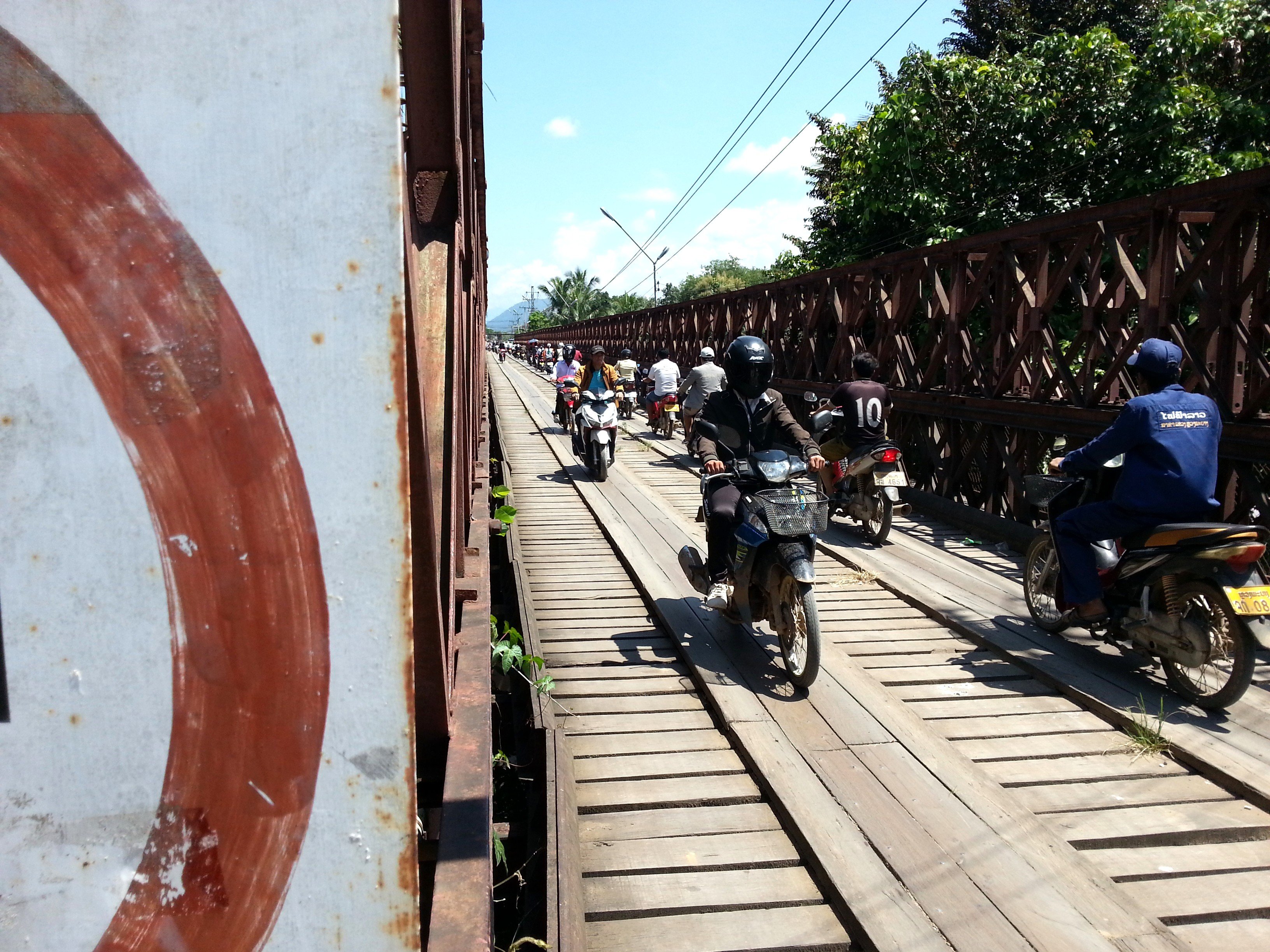 Motorcycles on the Old Bridge in Luang Prabang

The bridge that was constructed was a fairly feeble effort, and in many ways emblematic of the generally poor effort the French colonial government made to modernise the country during the period when Laos was a colony. The bridge is so narrow that only motorbikes can use it, with a single land of traffic going in each direction. The construction is also poor with the road surface consisting of perishable wooden planks placed horizontally to hold the road up, and other wooden planks placed length ways for the motorbikes to pass across. Traffic moves slowly on the bridge so as to allow the motorcyclists to maintain a course that keeps them on the central planks. 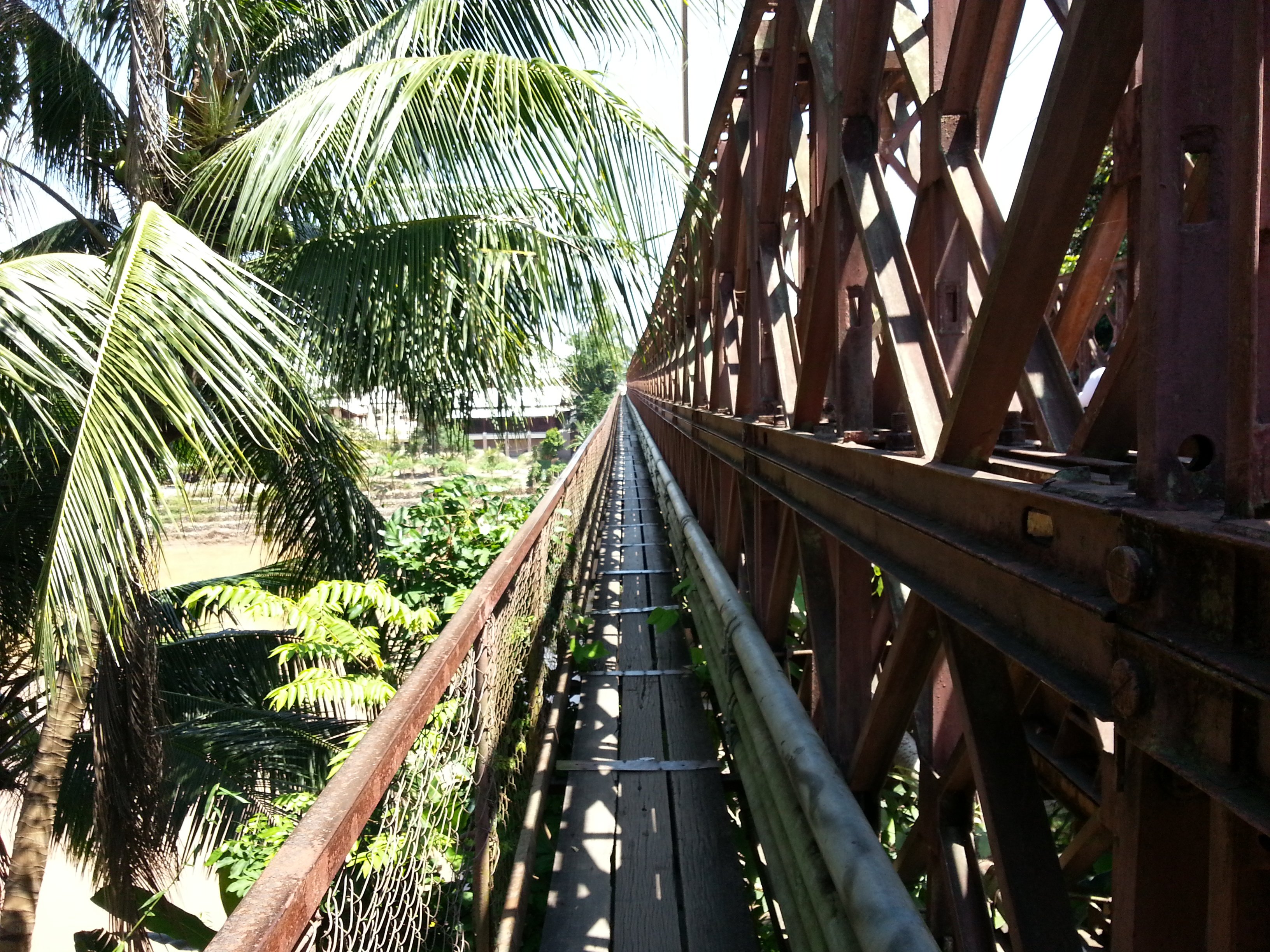 Pedestrian walkway on the Old Bridge

On either side of the bridge are pedestrian walkways held in place by cantilevers protruding out from the main road structure. On the one hand this arrangement keeps pedestrians safe from the danger of being hit by motorcycles on the main part of the bridge, but on the other hand it increases the potential for pedestrians crossing the bridge to end up falling into the wide, and at times fast flowing, river underneath. 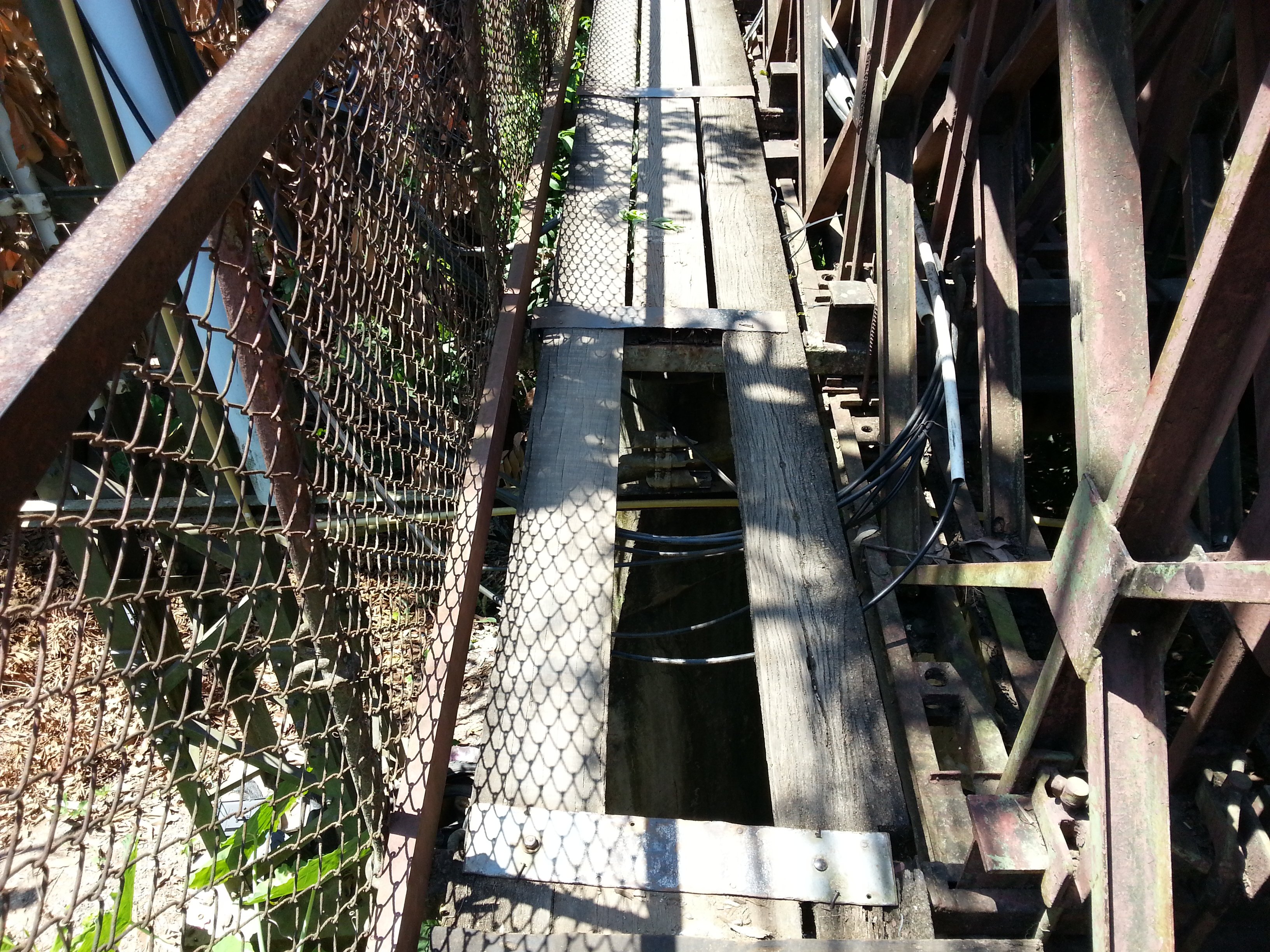 Some of the planks on the bridge are missing

To add to the overall lack of concern for ‘health and safety’ at the Old Bridge, the wooden planks on the pedestrian walkway are in a poor state of repair. If you plan to walk over the bridge we suggest that you keep a look out for holes in the surface of the walkway. If you want to take a photograph or look at the scenery it’s advisable to stop walking, because if you don’t you risk falling through ones of the holes and hurting yourself or even ending up in the river below. 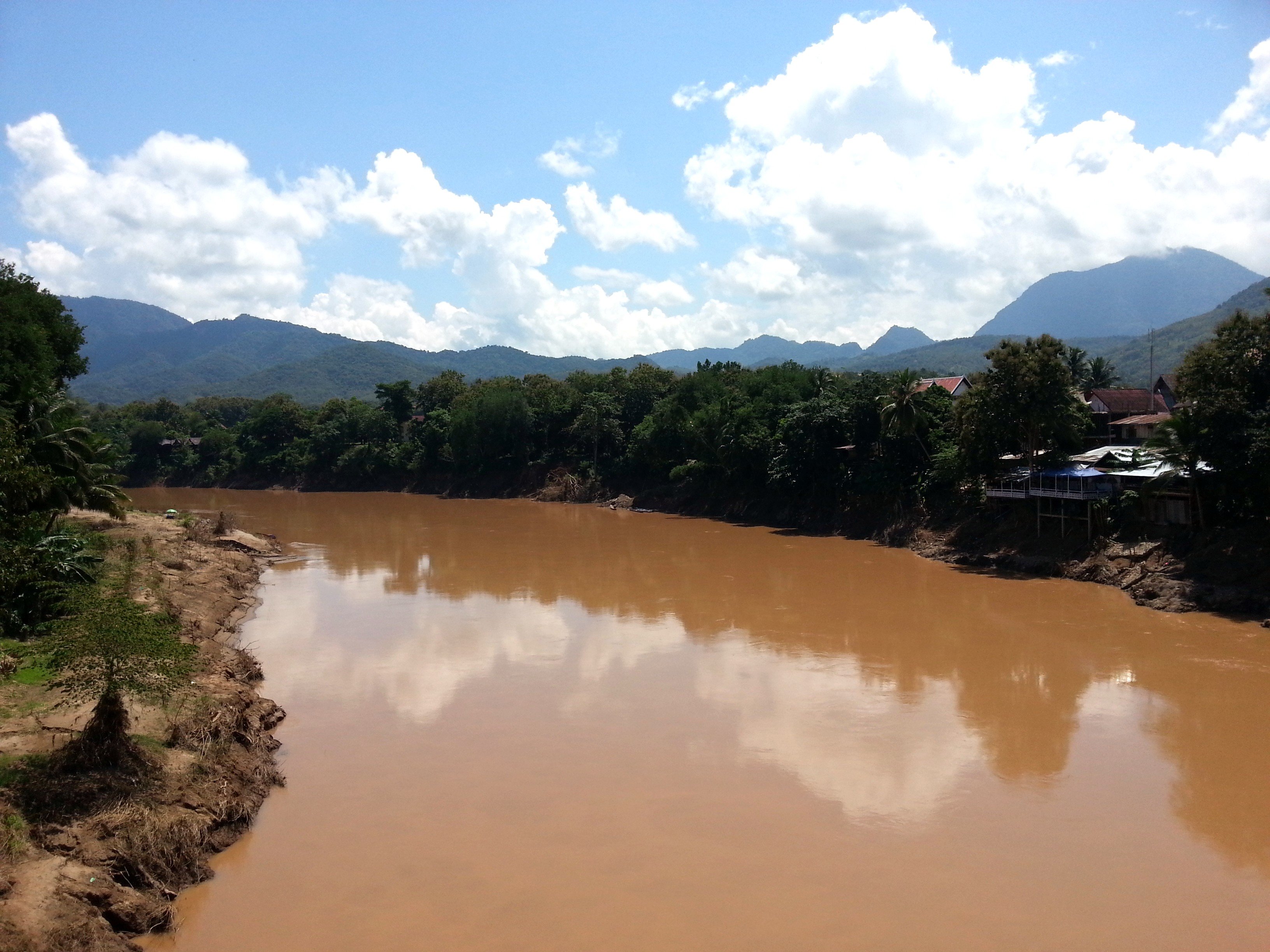 View from the Old Bridge in Luang Prabang

The best views are from the centre of the bridge on the east walkway. The muddy waters of the Nam Khan River are backed by distant mountains creating one of the better viewpoints in the mostly flat town of Luang Prabang.

Location of the Old Bridge

The Old Bridge is located at the southern end of the Phetsarat Road in Luang Prabang.

Next read about the Troung Tien Bridge