There is a single daily bus service from Pakse to Bangkok which is available to book online.

Use the Search Form to purchase your bus tickets from Pakse to Bangkok.

Bus services to Bangkok depart from the International Bus Stop on No.38 Road in Pakse.

Bangkok is an easy and cheap city to travel around because, as well as bus services (which tend to be slow), Bangkok has three very modern public transport systems, and an inexpensive river boat system serving Central and Outer Bangkok. The most famous of Bangkok’s urban public transport systems is the ‘Skytrain’, or the BTS as it formally known, which is an elevated railway with 2 lines serving most parts of the Central Bangkok. The Skytrain is cheap (20 to 50 THB for most journeys) and its quick. The Skytrain is also fun to use because you get some great views of Bangkok from the comfort of an air-conditioned carriage. You can buy single tickets in vending machines at any BTS station – bring some coins as not all vending machines on the BTS network have been upgraded to take notes. The nearest BTS station to the Northern Bus Terminal is Mo Chit BTS, a 5 minute journey away in a meter taxi. 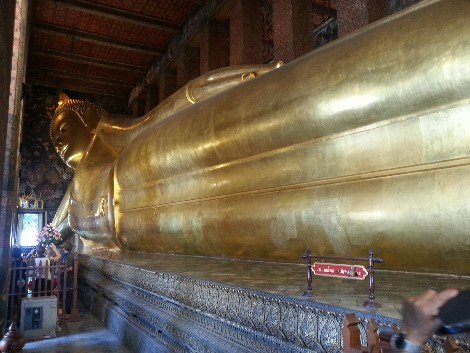 The BTS network has an interchange with the Airport Link at Phaya Thai BTS station. The Airport Link is another very modern and very cheap public transport service running from the centre of Bangkok to Suvarnabhumi Airport. The most expensive fare is 45 THB, which must be one of the cheapest rapid train services running from a main airport to the centre of a capital city anywhere in the World. If your destination is the Sukhumvit Road or Bangkok Train Station then if you coming from Suvarnabhumi International Airport you would alight from the Airport Link service at Makkasan Airport Link station and follow the walkway to the adjacent MRT station. The MRT is Bangkok’s recently constructed underground train network which runs from Bangkok’s main train station northwards, via Chautchak Park and Bang Sue Train Station, to the suburbs of Bangkok. The fourth and final major transport service in Bangkok is the Chao Phraya Express Boat service which has regularly stops along the Chao Phraya river in Great erBangkok. You can interchange from the BTS network to the Chao Phraya Express Boat network at Saphan Taksin BTS station. Tickets on the Chao Phraya Express Boat cost between 9 and 32 THB depending on your destination. The Chao Phraya Express Boat is both a convenient and a cheap way to travel, as well as an extremely pleasant way to travel, to difficult to reach places such as Thonburi Train Station and the Khao San Road, neither of which are connected to the other rapid transport systems.

Next read about Travel from Bangkok to Koh Phi Phi