There is a single daily direct bus service from Vang Vieng to Nong Khai which is available to book online.

Use the Search Form to purchase your bus tickets from Vang Vieng to Nong Khai.

Direct bus services from Vang Vieng to Nong Khai depart from outside the Malany guesthouse.

Nong Khai is a laid back medium sized city, with a population of slightly over half a million people. The most popular part of the city is around the Tha Sadet Road, which runs along the banks of the Mekong River. The Tha Sadet Road is the setting for the popular Saturday Night Market which is the highlight of the week in Nong Khai attracting visiting from Laos and as far away as Bangkok. The Tha Sadet Road is also lively on the other nights of the week as well with several well known restaurants located on this part of the riverside. For Western food and a relaxed place for a beer we recommend Noi and Brendan’s Restaurant. You might also try the large and very popular Daeng Namnueng Restaurant, which is also located on the river front. Daeng Namnueng Restaurant specialises in Vietnam spring rolls which you assemble yourself from plates of cooked and fresh ingredients. 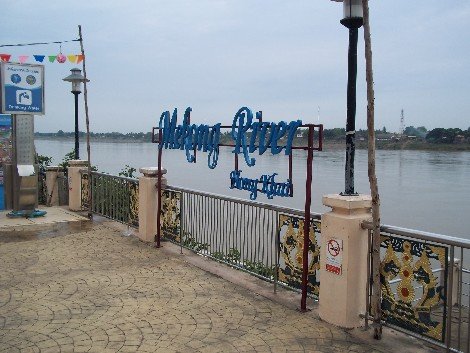 Away from the river front, the main road running through Nong Khai is the Prajak Sillakhom Alley. This is where you should head towards if you are after inexpensive food and a cheap place to stay for the night. For breakfast we suggest you head to a place which doesn’t look much like much, and few foreign visitors ever go there, but its massively popular with local people and called the Im-Em Restaurant. The Im-Em Restaurant is only open in the morning and they only serve three dishes: Pan-Egg, Rice Porridge and Bread-Sausage. Queues of people form every morning outside the Im-Em Restaurant for the Bread-Sausage. Order some and you will find out why its so popular. Another unusual and unexpected culinary delight in Nong Khai is the tiny Mariam Indian Restaurant also on the Prajak Sillakhom Alley. Very cheap and very tasty Indian dishes served on street side tables. This is a small family run restaurant where they speak some English.

Next read about Travel from Nong Khai to Chiang Mai