Vientiane Night Market is located in Chao Anuvong Park, which is near to the Mekong River and the lively Quai Fa Ngum, in Vientiane City Centre in Laos. 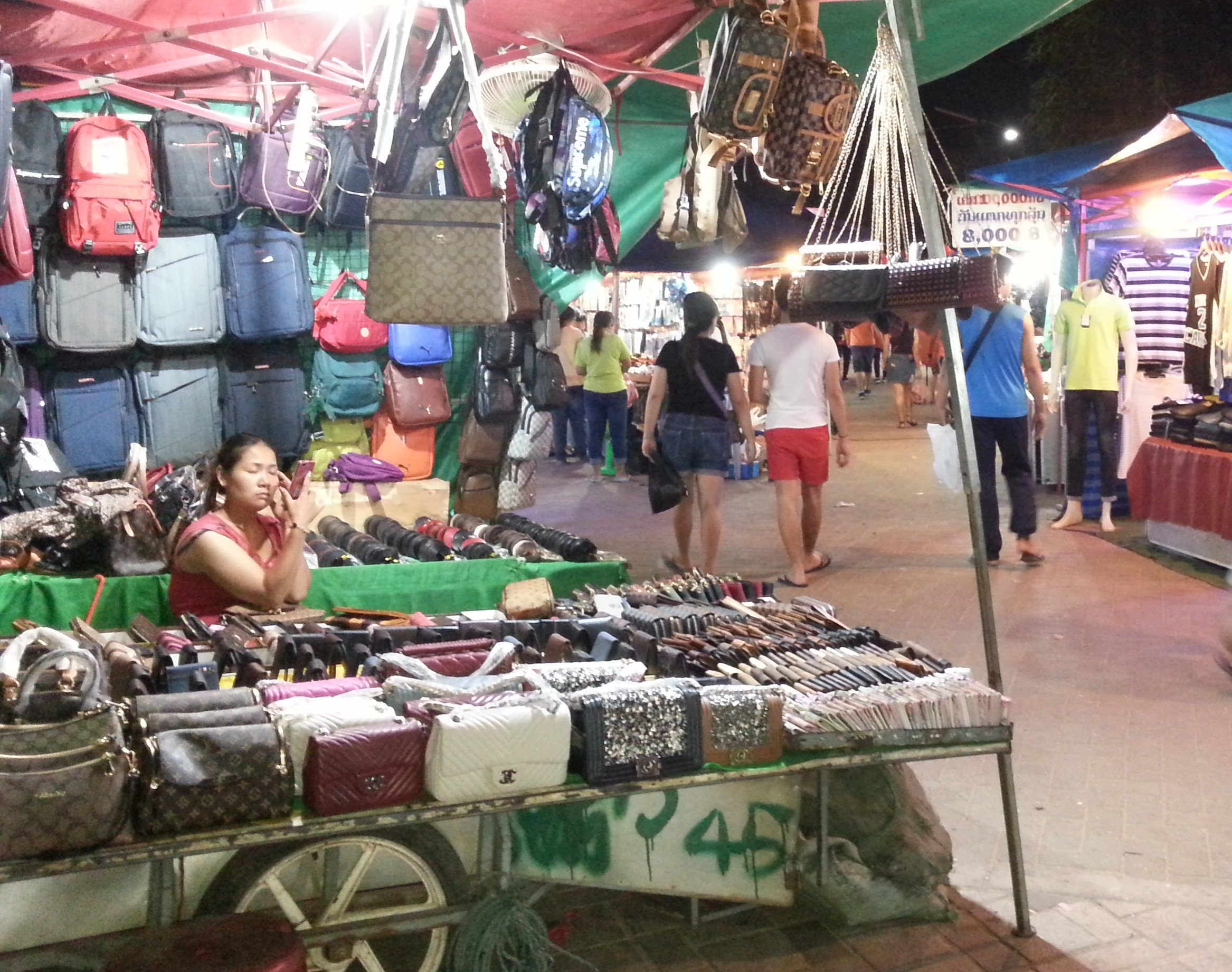 The night market opens from 18:00 to 22:00 every night of the year, although if its raining heavily (June to August is the wettest period) it’s not worth going because few stall holders choose to open and few people go.

Vientiane Night Market is a tourist market selling things that the stallholders believe will appeal to tourists. Sadly there are less arts and crafts items on sale here than at other popular markets in Laos, such as Luang Prabang Night Market, and there are no food stalls in the market itself. 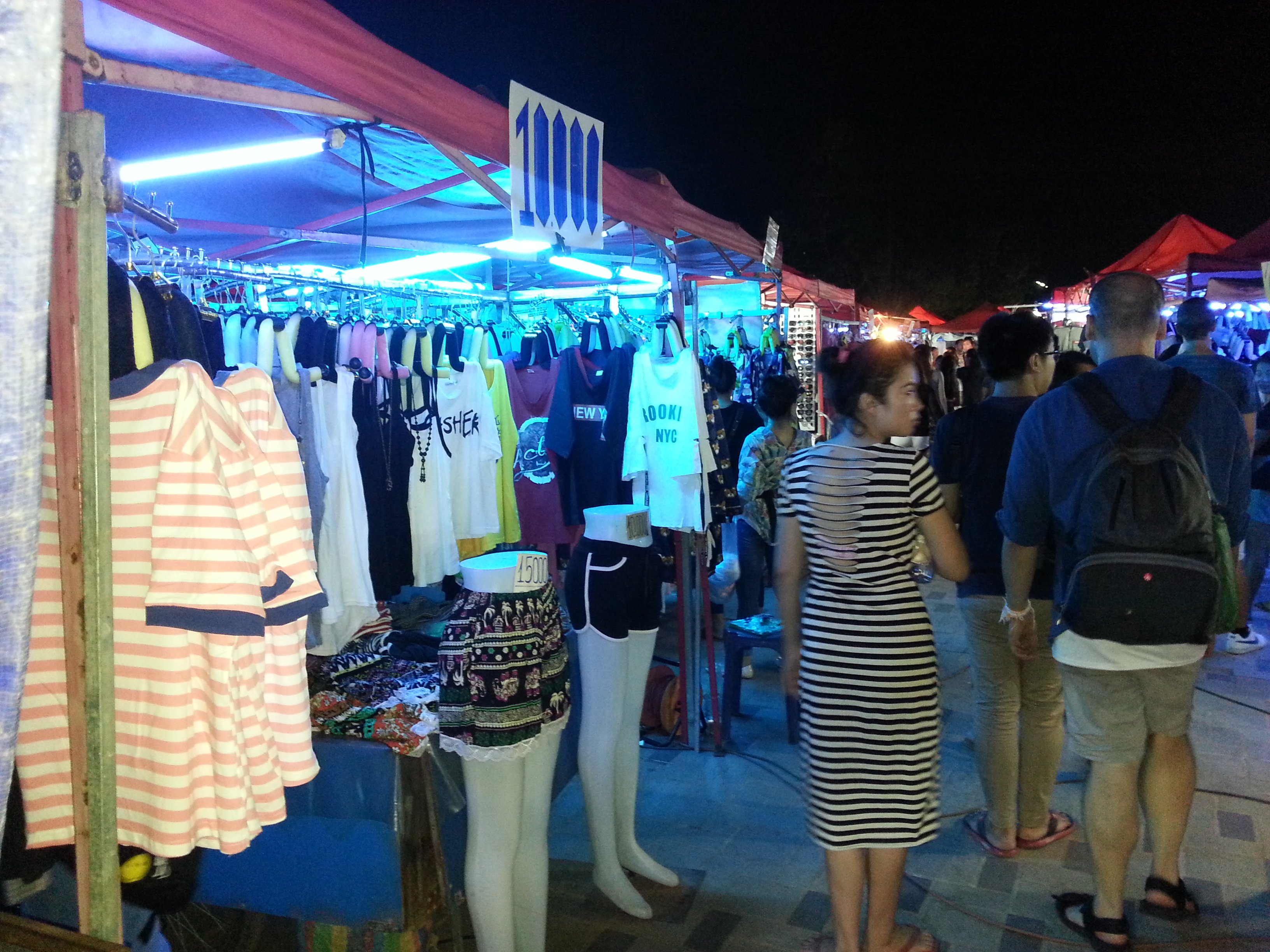 The majority of the stall holder sell clothes. Whilst not the cheapest market in Laos, you can get some bargains. The stall pictured above (September 2018) was selling T-shirts for 10,000 kip each which is approximately $1.2 USD. Most of the prices of items in the market are not fixed and you can bargain. If you buy a few items from the same stall you will get a better price. Experienced bargain hunters will check out what is on sale across the market, and for what price, before honing in on a particular stall to strike a deal. 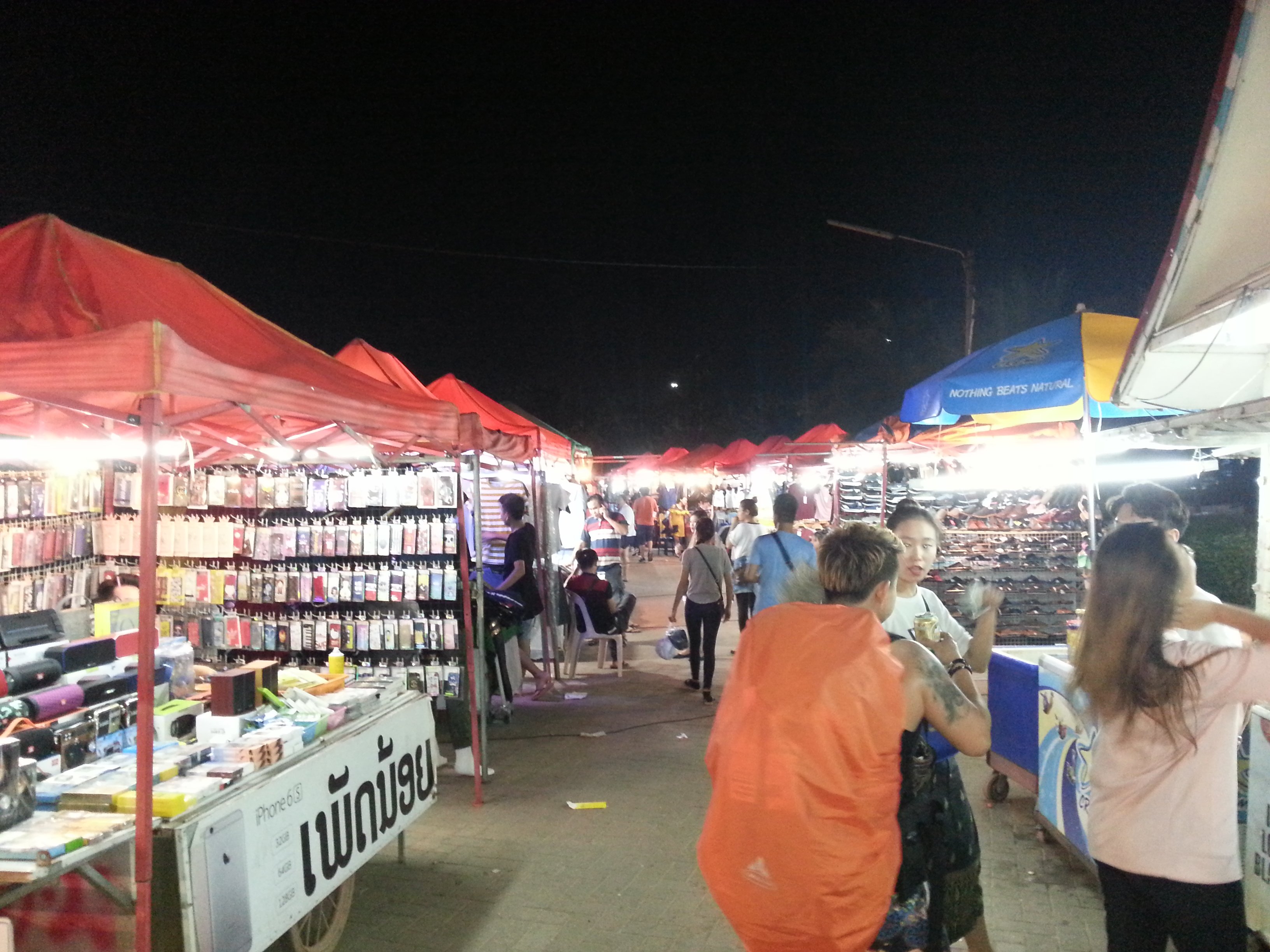 As well as clothes, you can find a range of other items such shoes, bags, fake designer sunglasses and phone accessories. Some of what is on sale is clearly poor quality or overpriced, there are however bargains to be found if you hunt around, and then you are patient in your negotiations with the vendors. Getting angry never gets you the best results in a South East Asian market and Vientiane Night Market is the same. 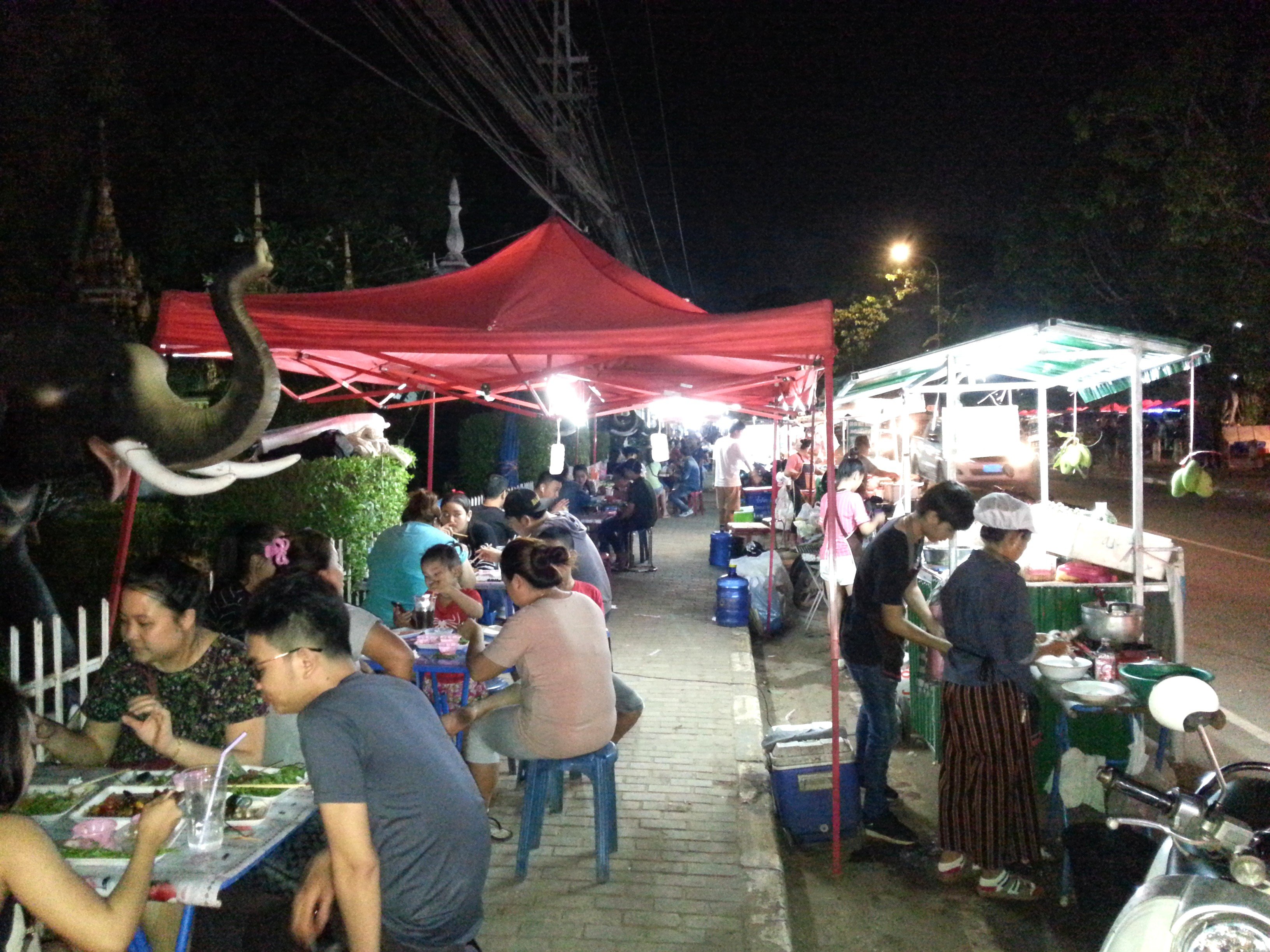 The big selling point of Vientiane Night Market is its location. Opposite the market is the Quai Fa Ngum, which is the liveliest road at night in Vientiane. The market itself is regulated and food vendors have not allowed in (which is a huge mistake on the part of the city authorities) there are no such restrictions in place, however, on the Quai Fa Ngum which runs alongside and the pavement is packed with food vendors. 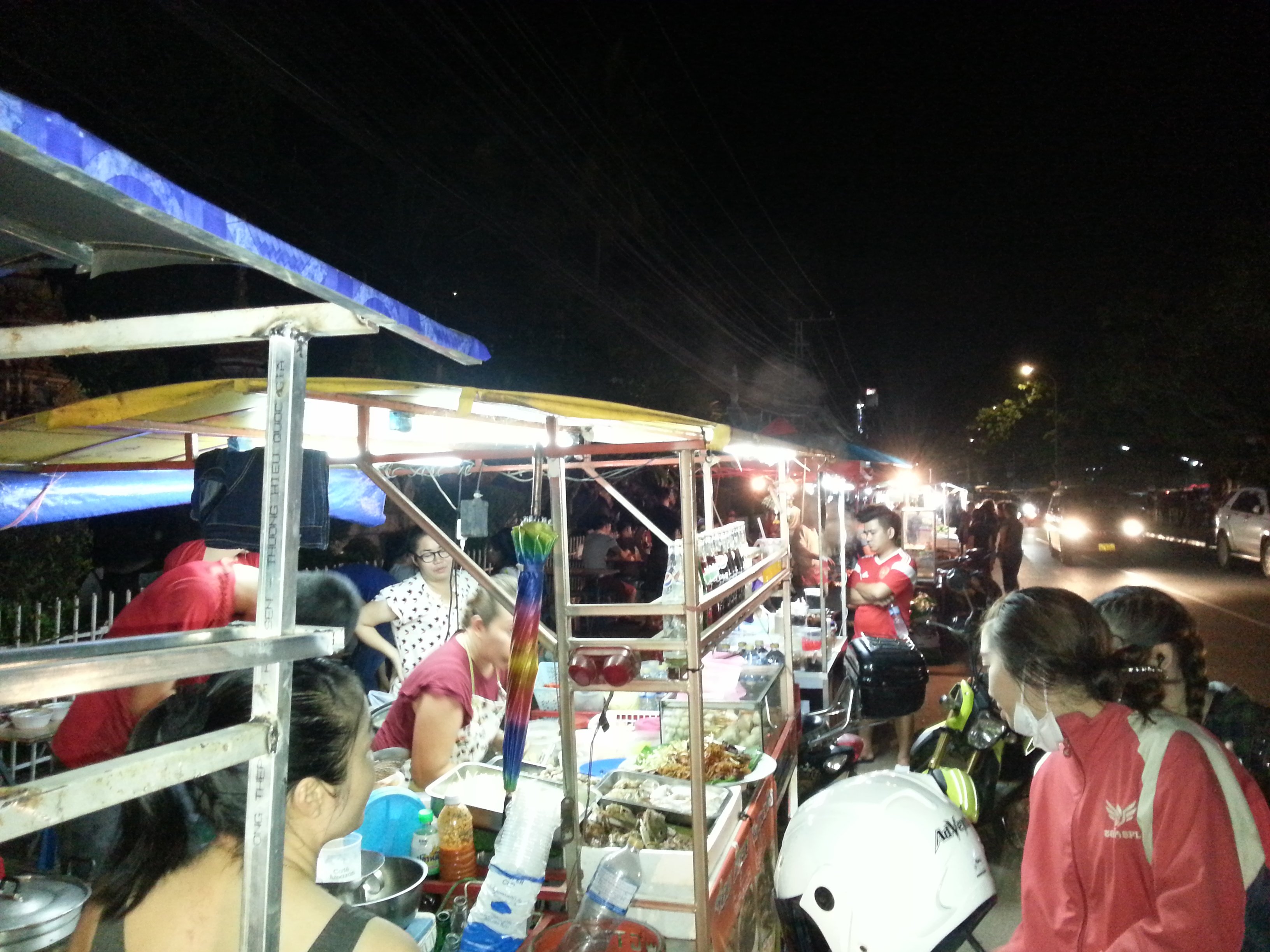 The food stalls near the market are very cheap and sell Laotian food making this a popular place for local people to come and eat in the evening. The sidewalk is full of plastic tables and chairs where diners eat and drink. You can easily combine a visit to Vientiane Night Market with the opportunity to try some authentic Laos food at the very cheap prices. Eating roadside on the Quai Fa Ngum is also an atmospheric experience and if you fancy a drink after there are lots of bars nearby.

Vientiane Night Market is located near the Mekong River in Chao Anuvong Park.

Next read about Travel from Bangkok to Vientiane