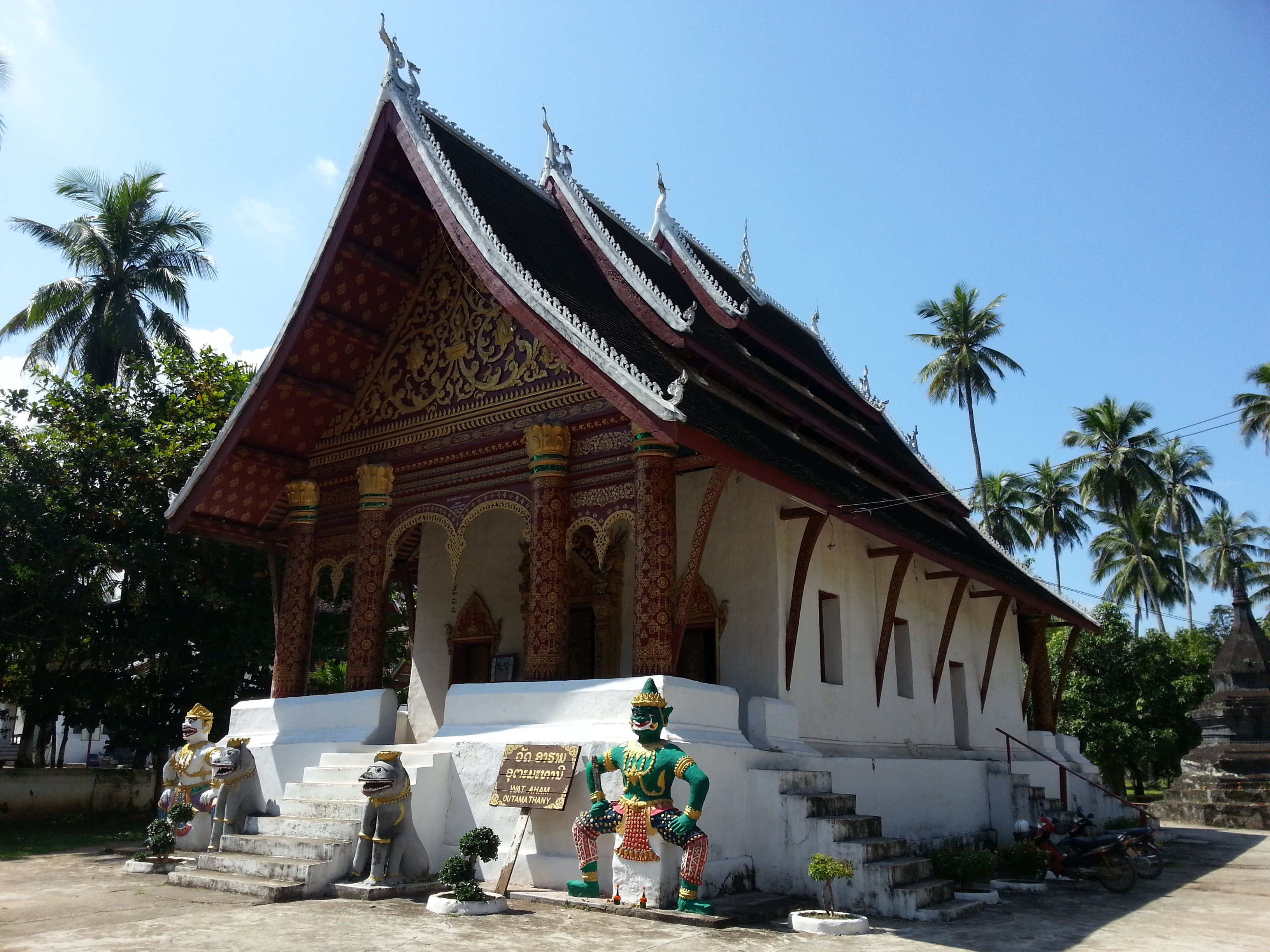 The Ordination Hall , or ‘sim’ as this part of a temple is referred to in the Laos language, was constructed some point in the early 1800s. Its free to visit and open during daylight hours.

Wat Aham is a relatively modern temple compared to religious buildings which were previously located on the same site, which were constructed at some point in the 14th Century. These earlier religious building were not Buddhist but rather rather shrines to Pu No and Na No, who were worshipped by believers in the ancient animist religions of Laos as guardians of the city. 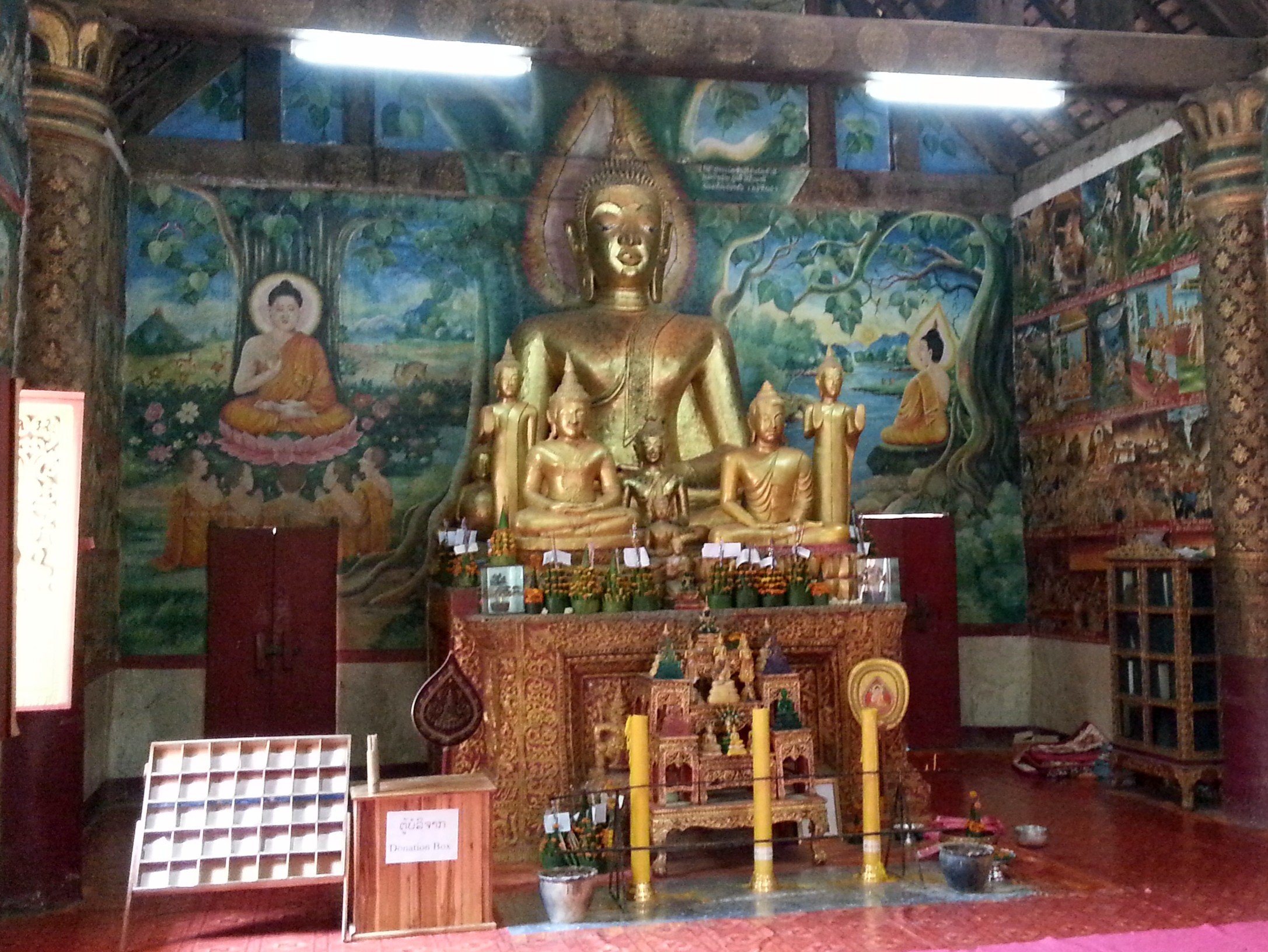 These early non-Buddhist shrines were destroyed in the 1530s on the order of King Phothisarath, who was a devout Buddhist and believed that it was wrong to revere spirits of the ancient animist religions. Shortly after destroying the spirit shrines at Wat Aham, and other locations in the city, a series of natural disasters occurred devastating Luang Prabang which the general populous attributed to the removal of the spirit shrines. 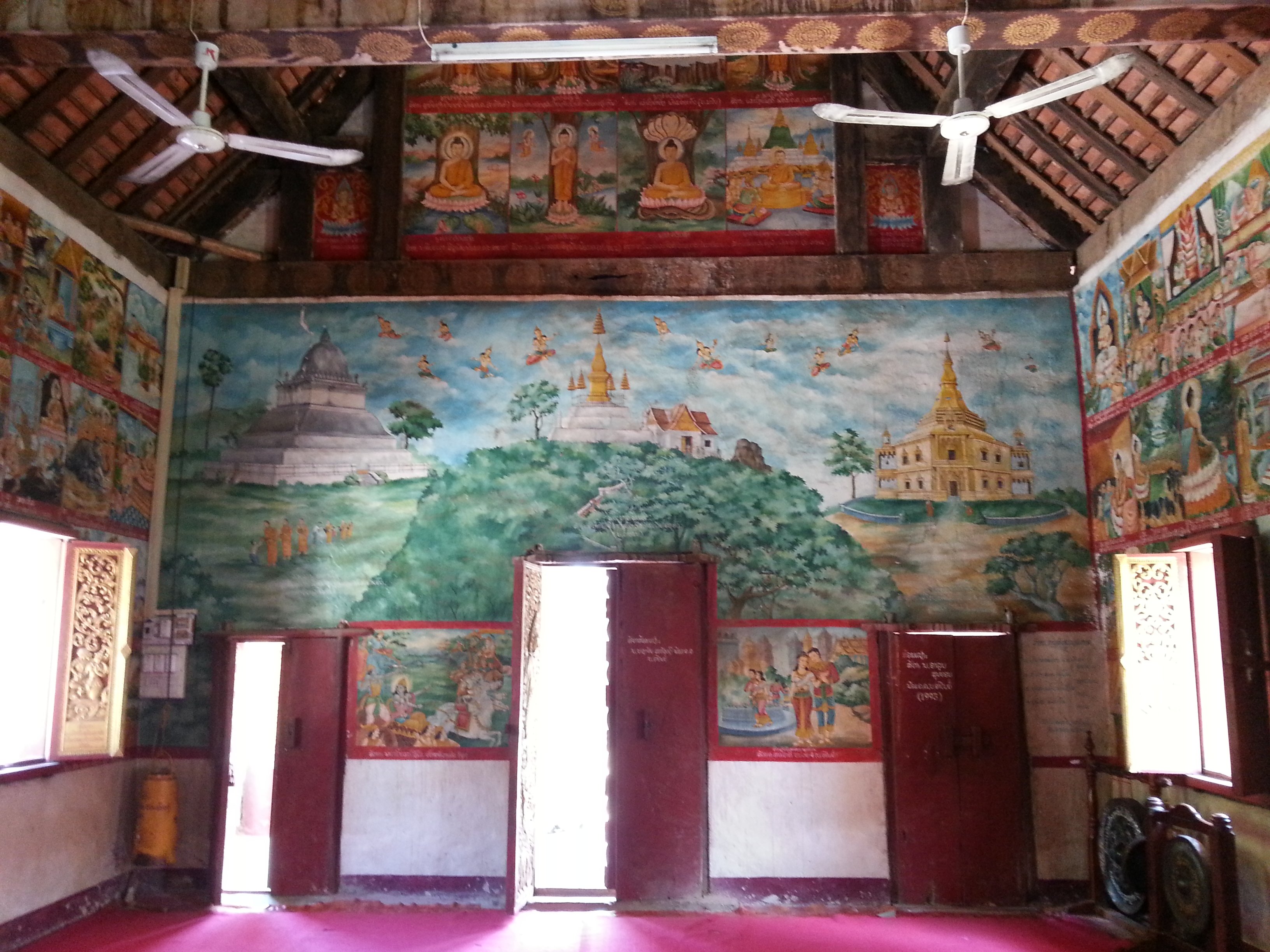 King Phothisarath’s successor, King Sai Setthathirat, very sensibly rebuilt the shrines to Pu No and Na No at Wat Aham where they remained until the middle of the 20th Century. According to local folklore Pu No and Na No have now become embodied in the large and very old bodhi tree that still stands near the entrance to Wat Aham. 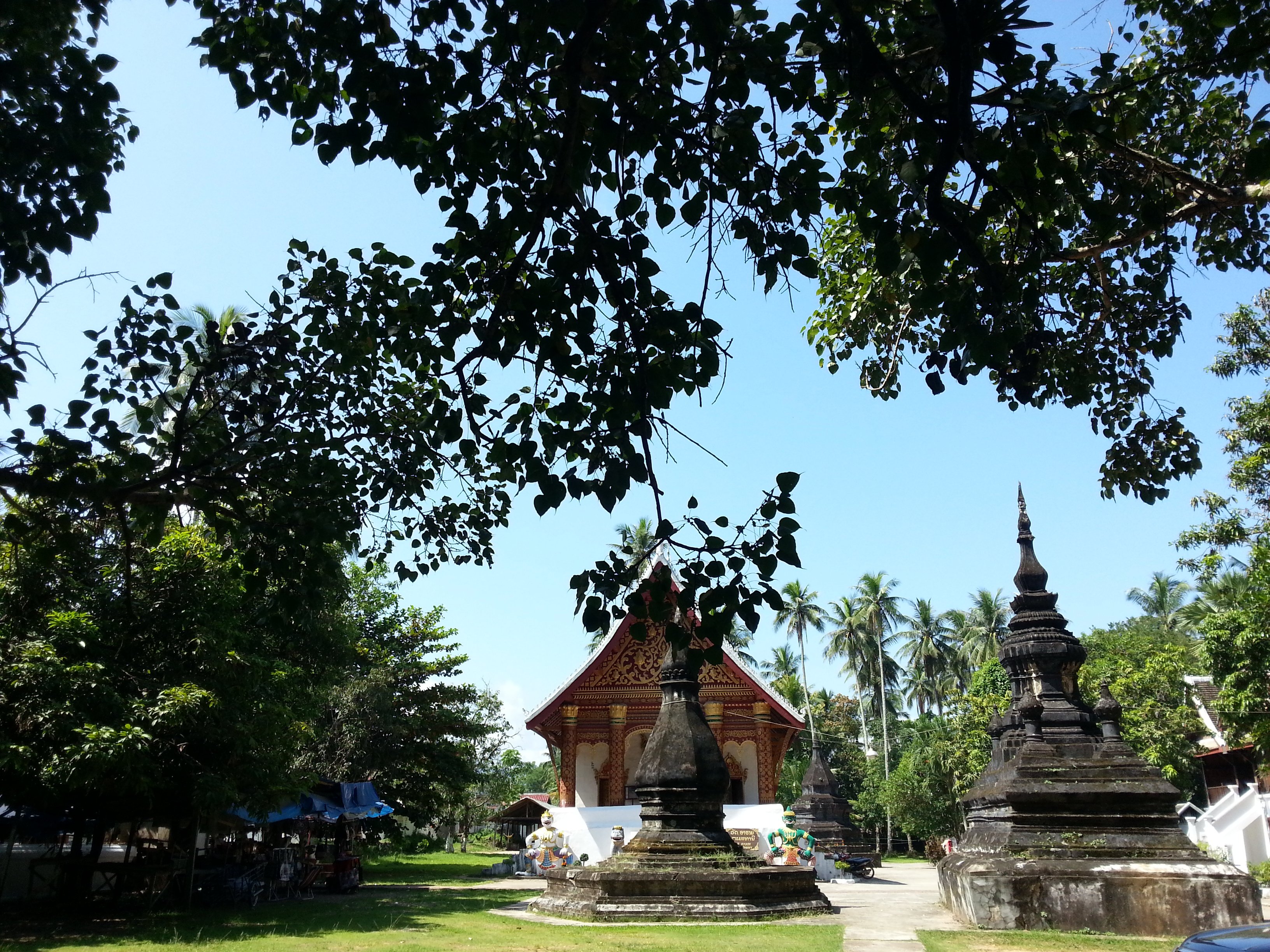 The modern day Wat Aham has a small but beautifully constructed temple building with a three tiered roof. In front of the temple there are statues of two lions and the main two characters from the Phalak Phalam, which is a Laotian version of the Indian epic saga the Ramayana. 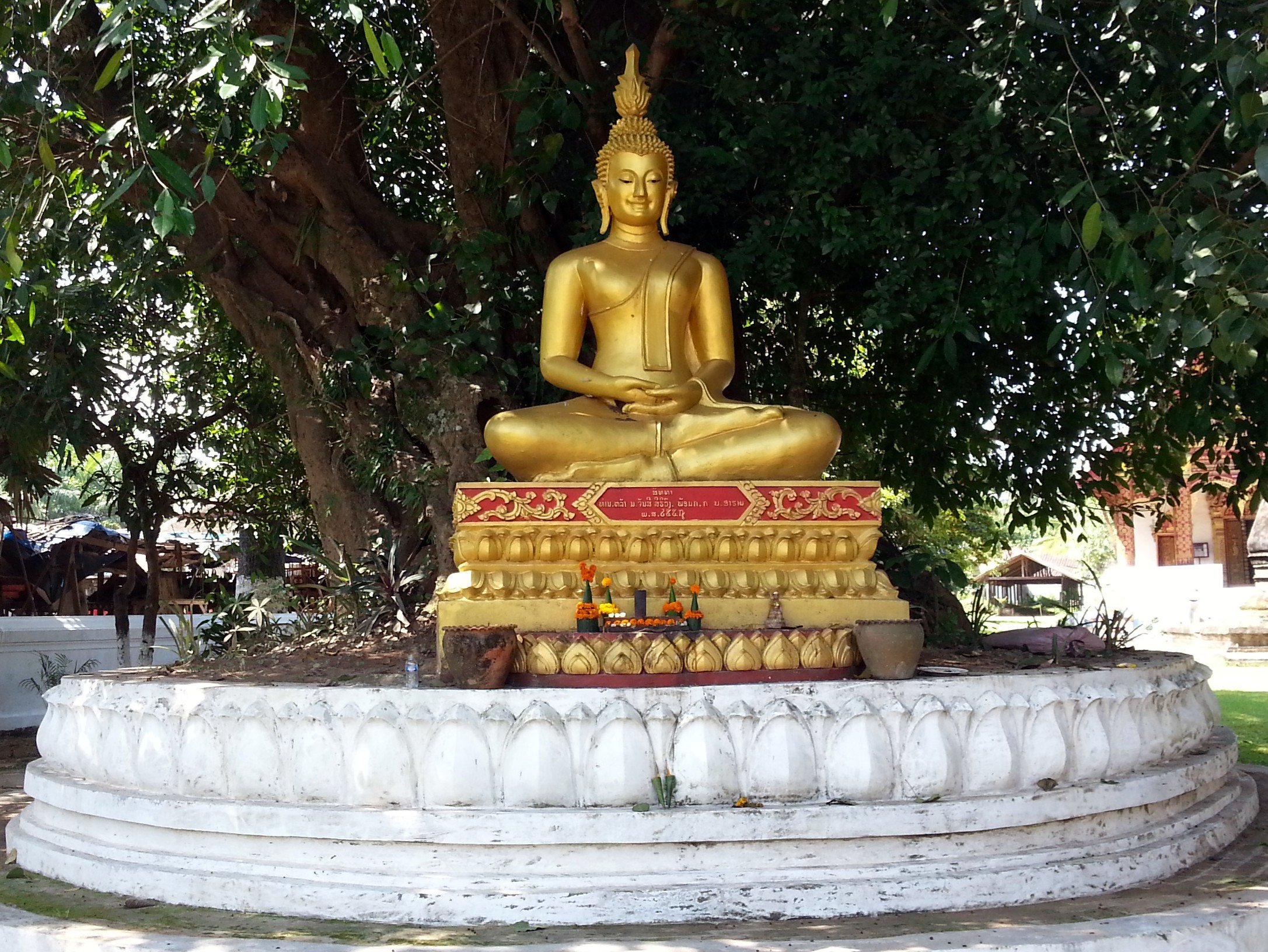 The inside of the sim is beautifully decorated with colourful murals. Some of the mural graphically depict the consequences of how bad deeds will result in being punished in Buddhist hell. Other murals tell stories from the history of Luang Prabang. This is an interesting temple and its worth spending some time examining 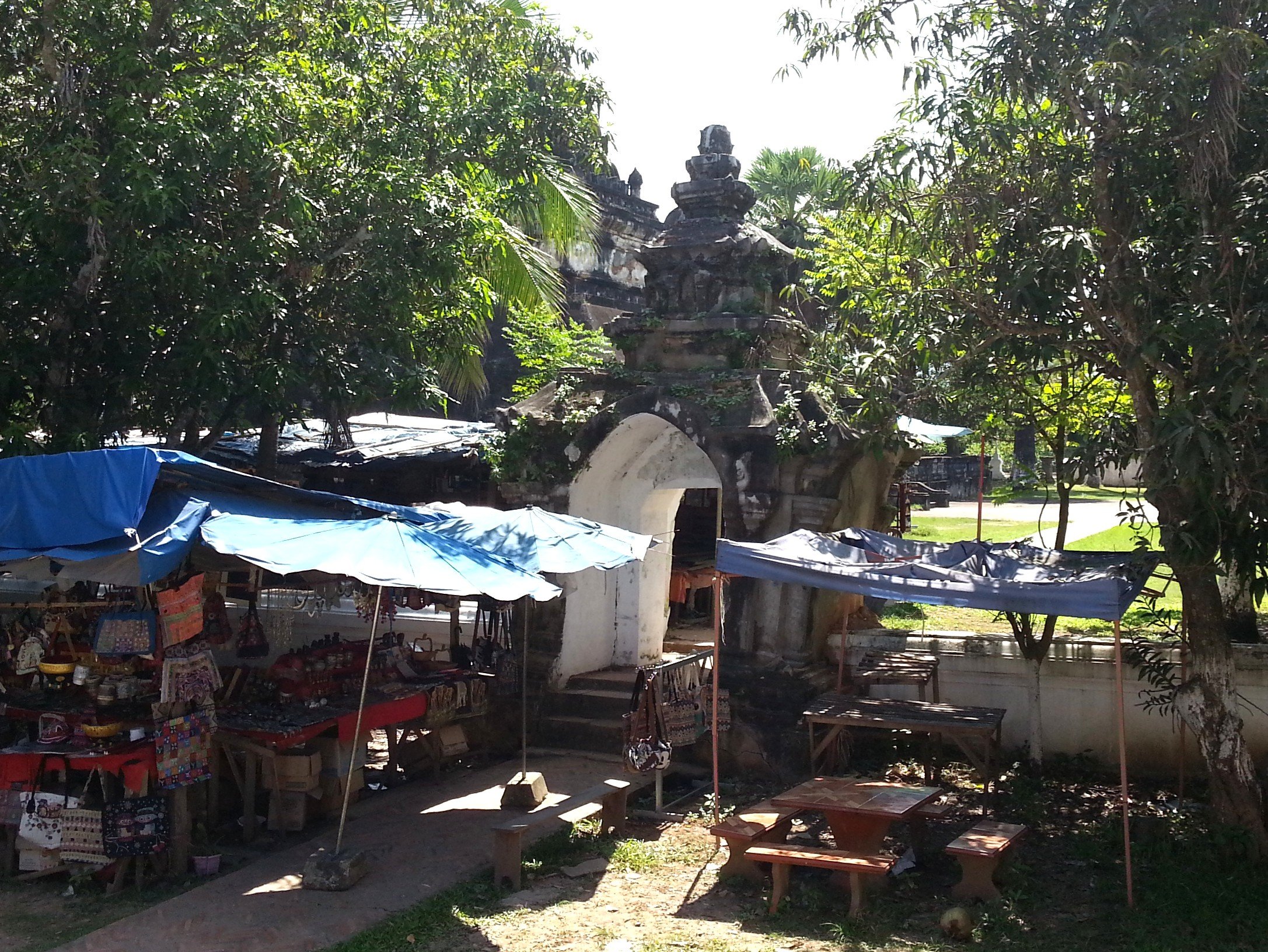 Other notable features of the temple include some blackened stupa which appear to pre-date the Ordination Hall, two new golden Buddha statues which have been strategically placed where once there were shrines to Pu No and Na No, and a very elaborate stone gateway marking the entrance to the grounds of Wat Wisunalat, which is located on an adjacent plot of land.

Wat Aham is located on the Kingkitsarath Road in Luang Prabang.

Next read about Travel from Chiang Mai to Luang Prabang