Jar Site 1, also known as Thong Hai Hin, is one of the largest collections of the giant stone jars after which the area in which they are located, the ‘Plain of Jars’, is named. 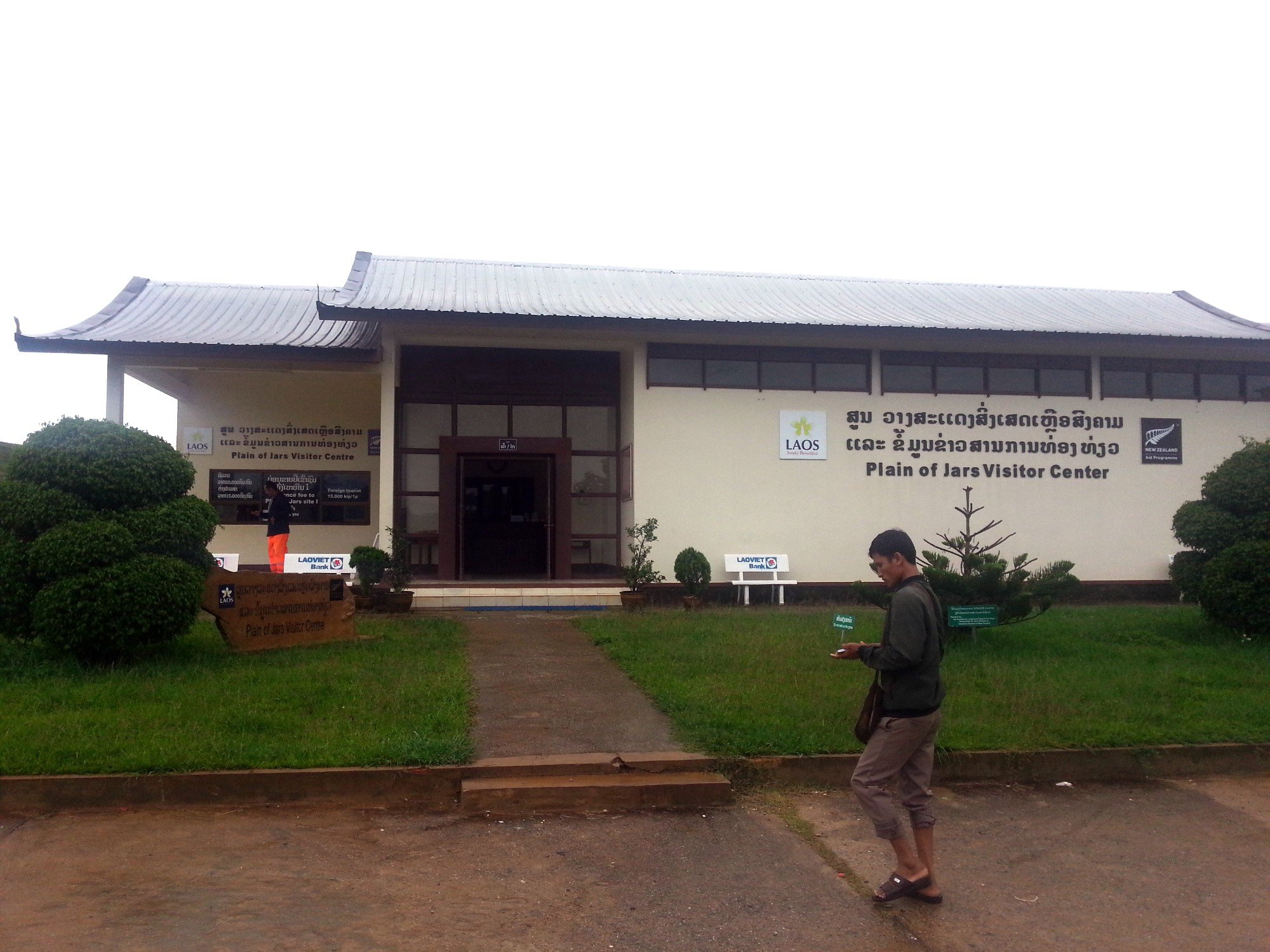 Jar Site 1 is closest significant collection of these jars to the province’s main town of Phonsavan, where most visitors to the Plain of Jars arrive into by bus, taxi or minivan and stay overnight before visiting the famous jars the next day. For this reason Jar Site 1 is the most visited of the many jars sites (over 90 have been documented to date) on the Plain of Jars.

Jar Site 1 is the most developed of the many sites in terms of facilities for visitors. As you approach the site there is a visitor centre attached to a ticket booth. There is also a row of shops and small restaurants near the visitor centre. 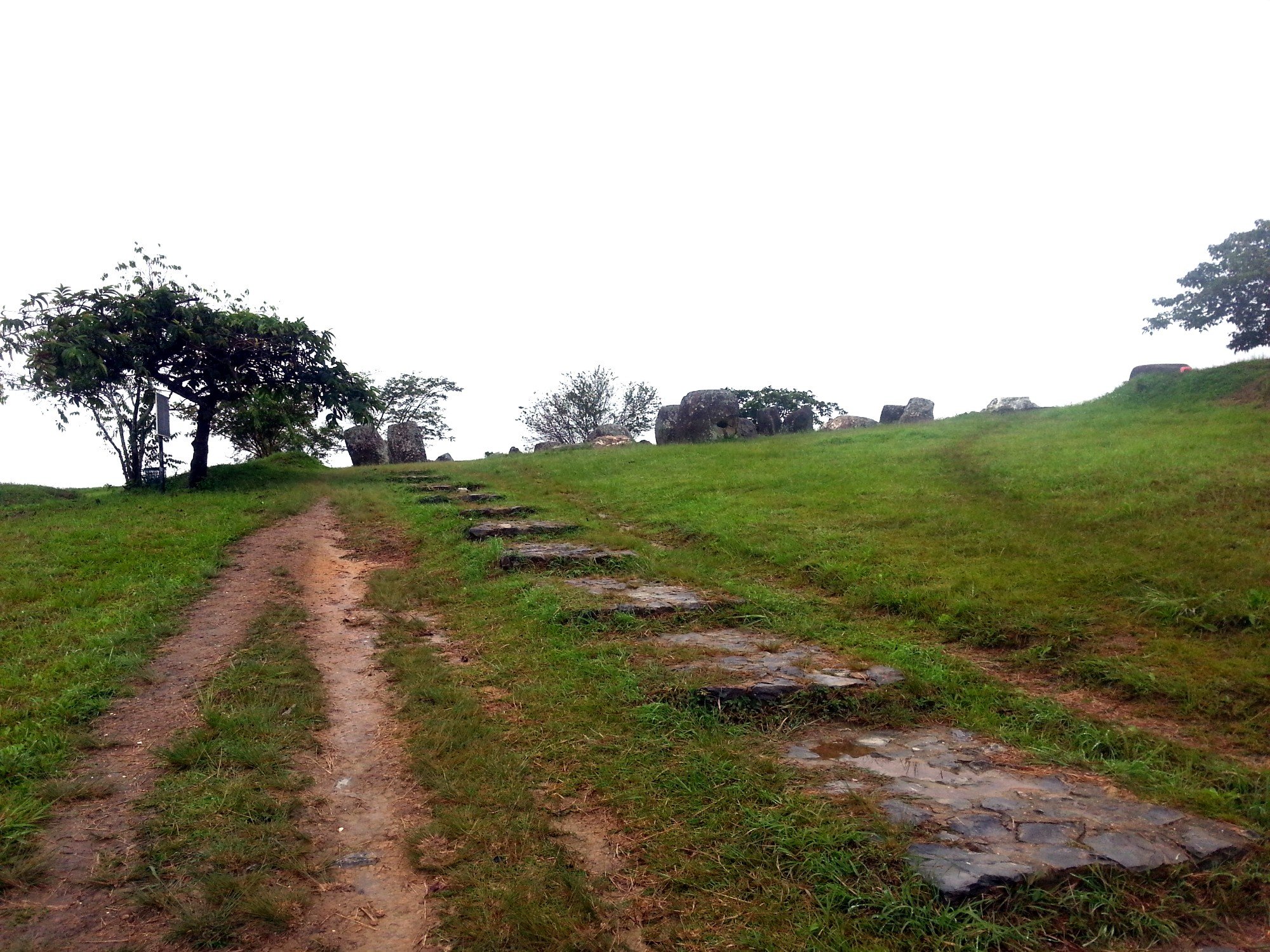 From the visitor centre you need to continue a short way further down the road to reach Jar Site 1. There is a car park at the end of the road with a trail leading up to the first cluster of jars on top of a hill. Be careful to stick to the designated paths as you approach for reasons I explain below. 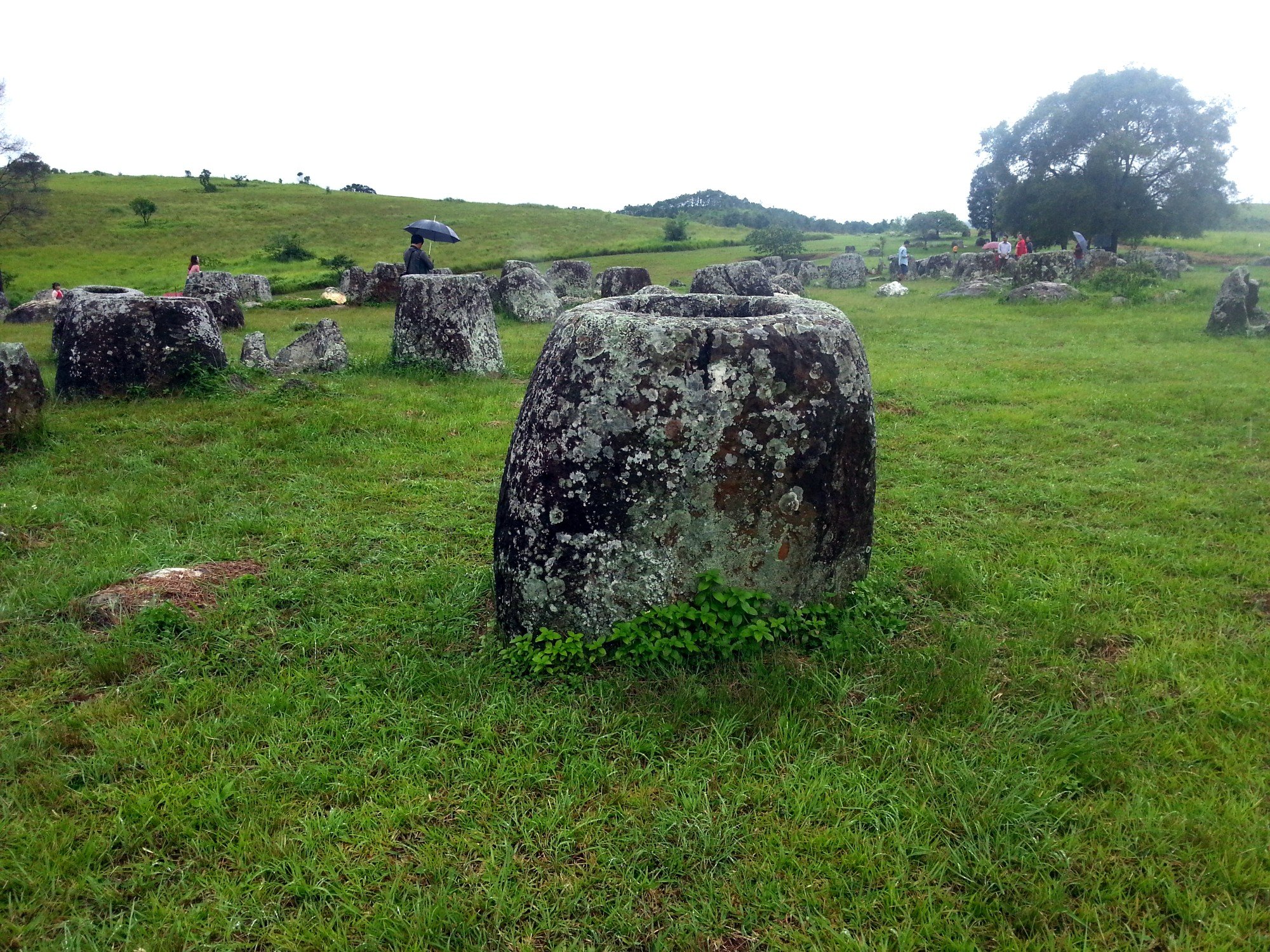 Beyond this first cluster of jars on top of the small hill there is another cluster of jars in the field below. The total number of stone jars at Jar Site 1 is over 300. 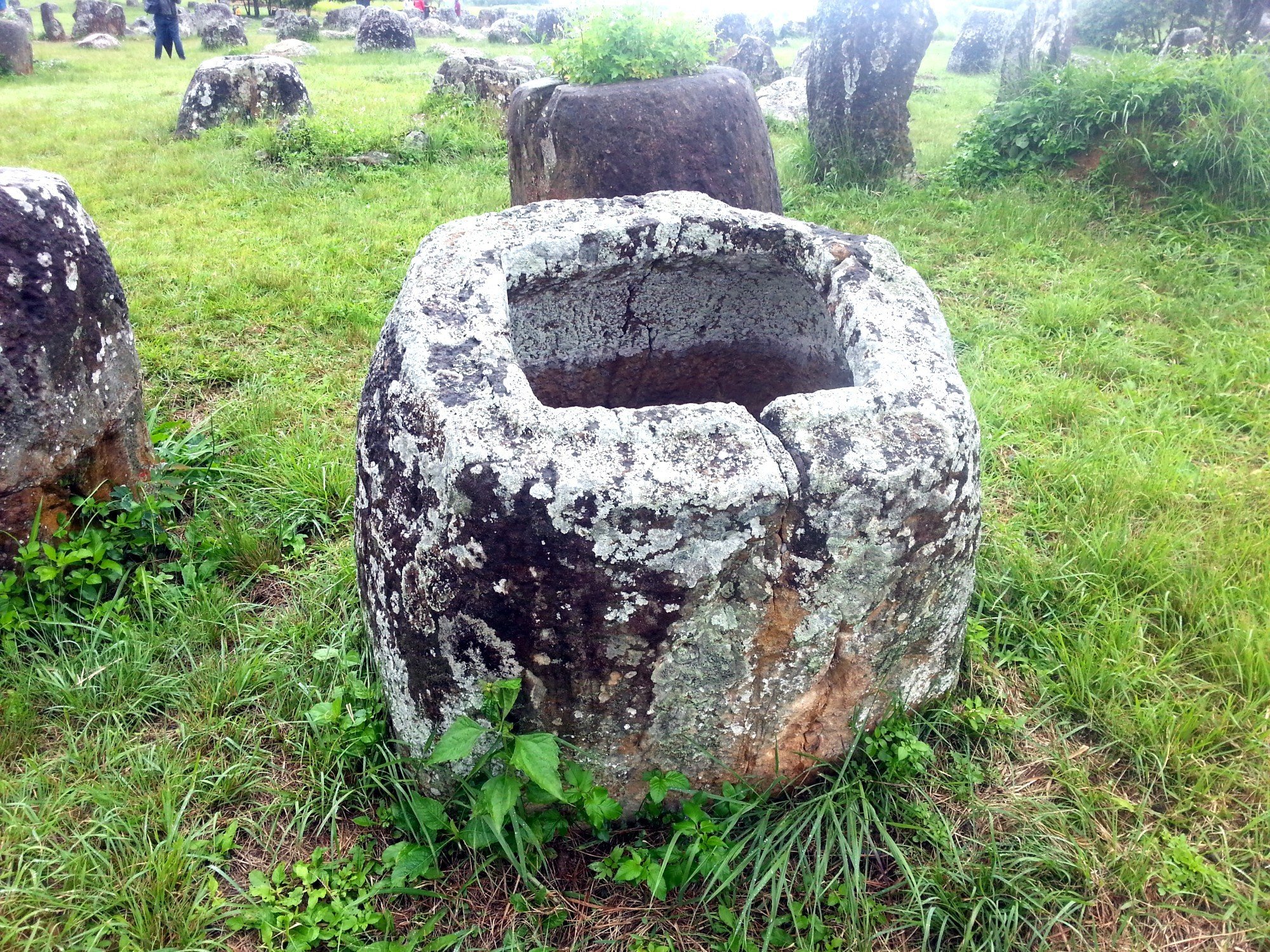 The origin, purpose and age of these stone jars is unclear. Various archaeologists has dated the ages of these jars as having been created being in a period from roughly 500 BC to 500 AD. The prevailing theory, and the one most backed by the evidence, is that the jars where used in burial rituals. 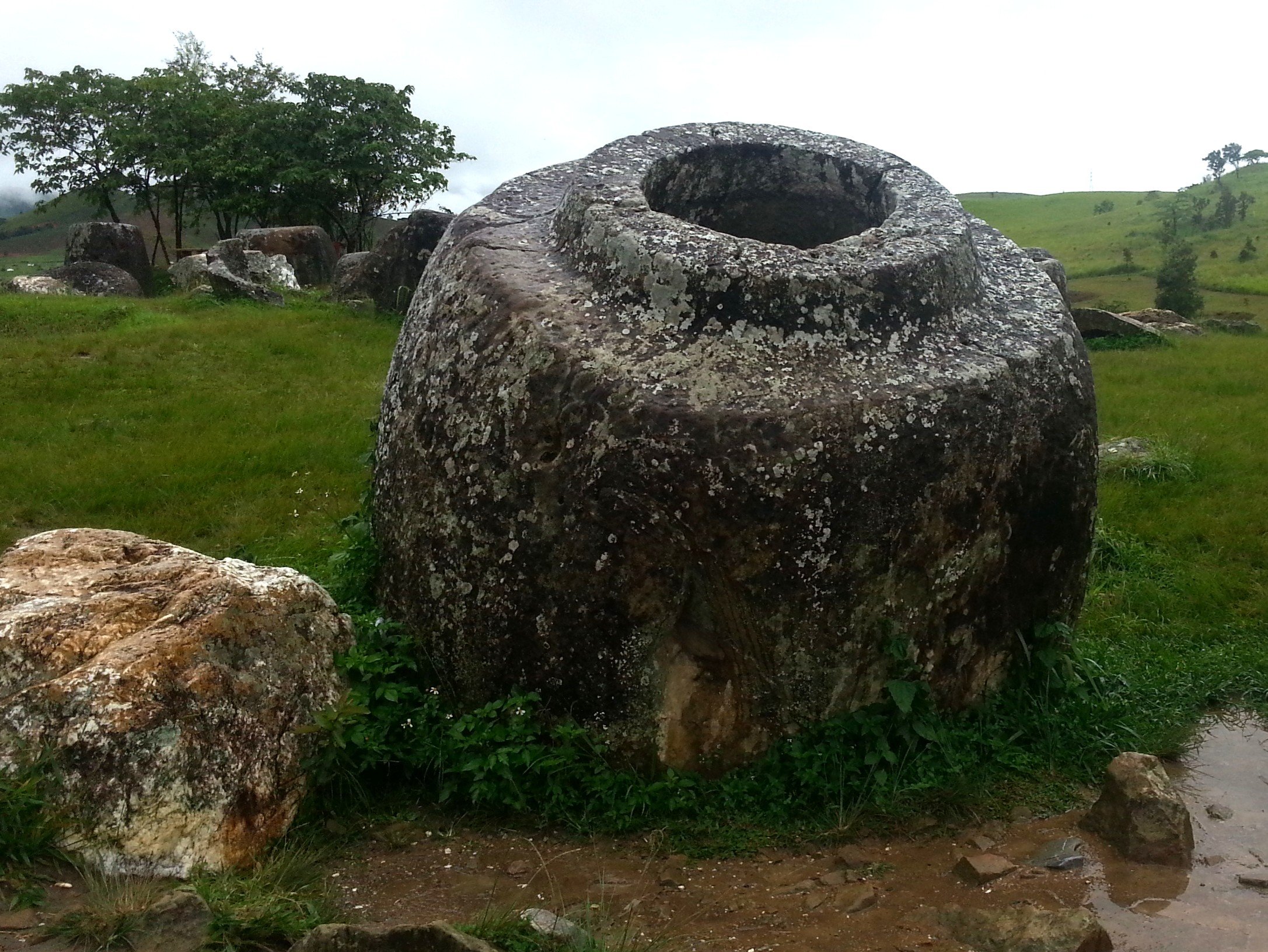 The jars vary in size from 1 metre tall to 3 metres tall. The differences in the sizes of the jars fits in with the theory about their being used as pots for keeping dead bodies; the smaller jars could have been used to store the bodies of children and the larger jars the bodies of adults. 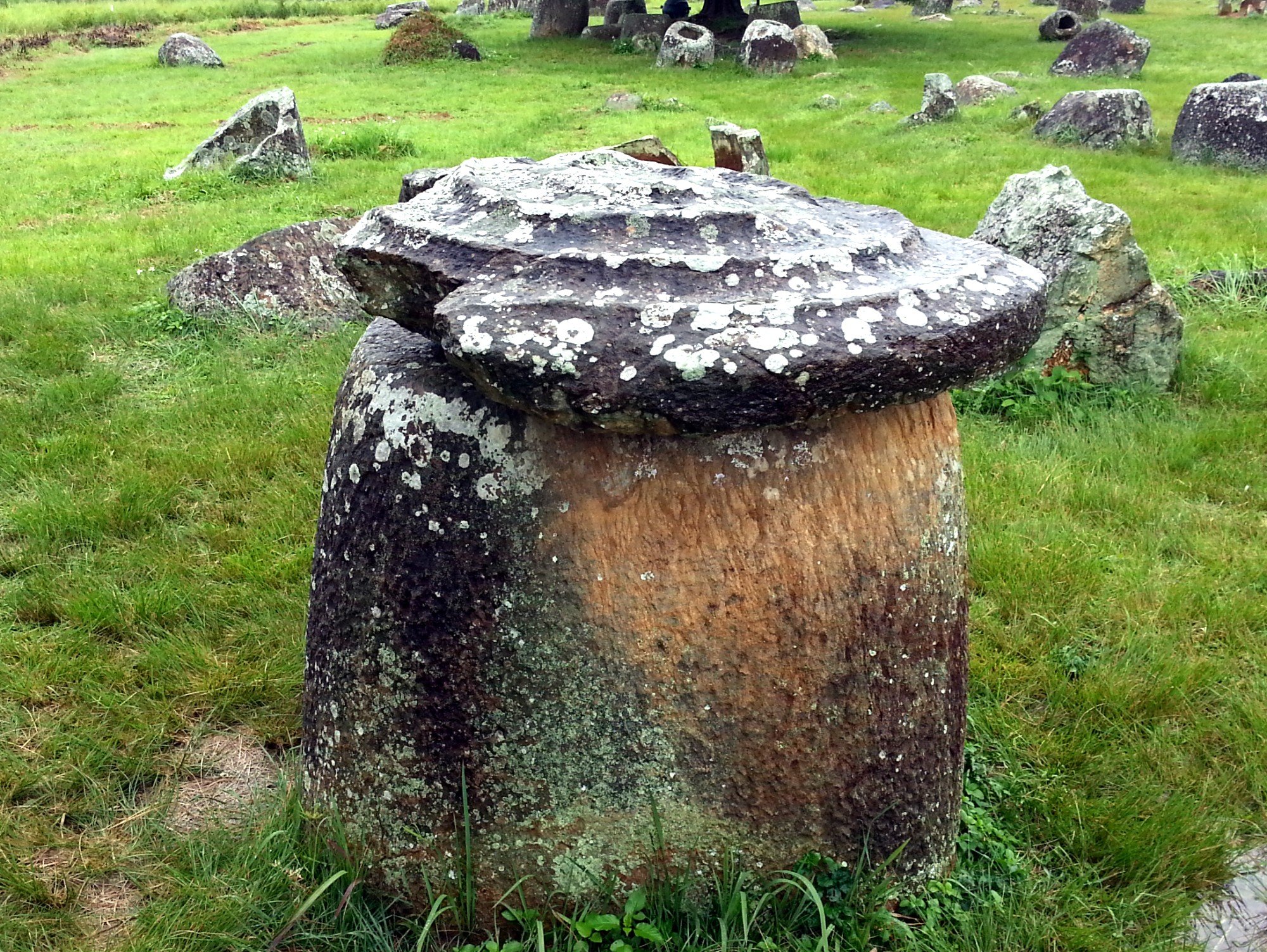 Jar with lid at Jar Site 1

Jar Site 1 has the only jar with a lid still in place. There are other lids at jar sites on the Plain of Jars but these are scattered around the stone jar on the floor. The size and shape of the lids and the jars suggests that some kind of perishable material had been used to form a seal between the jar and the lid. 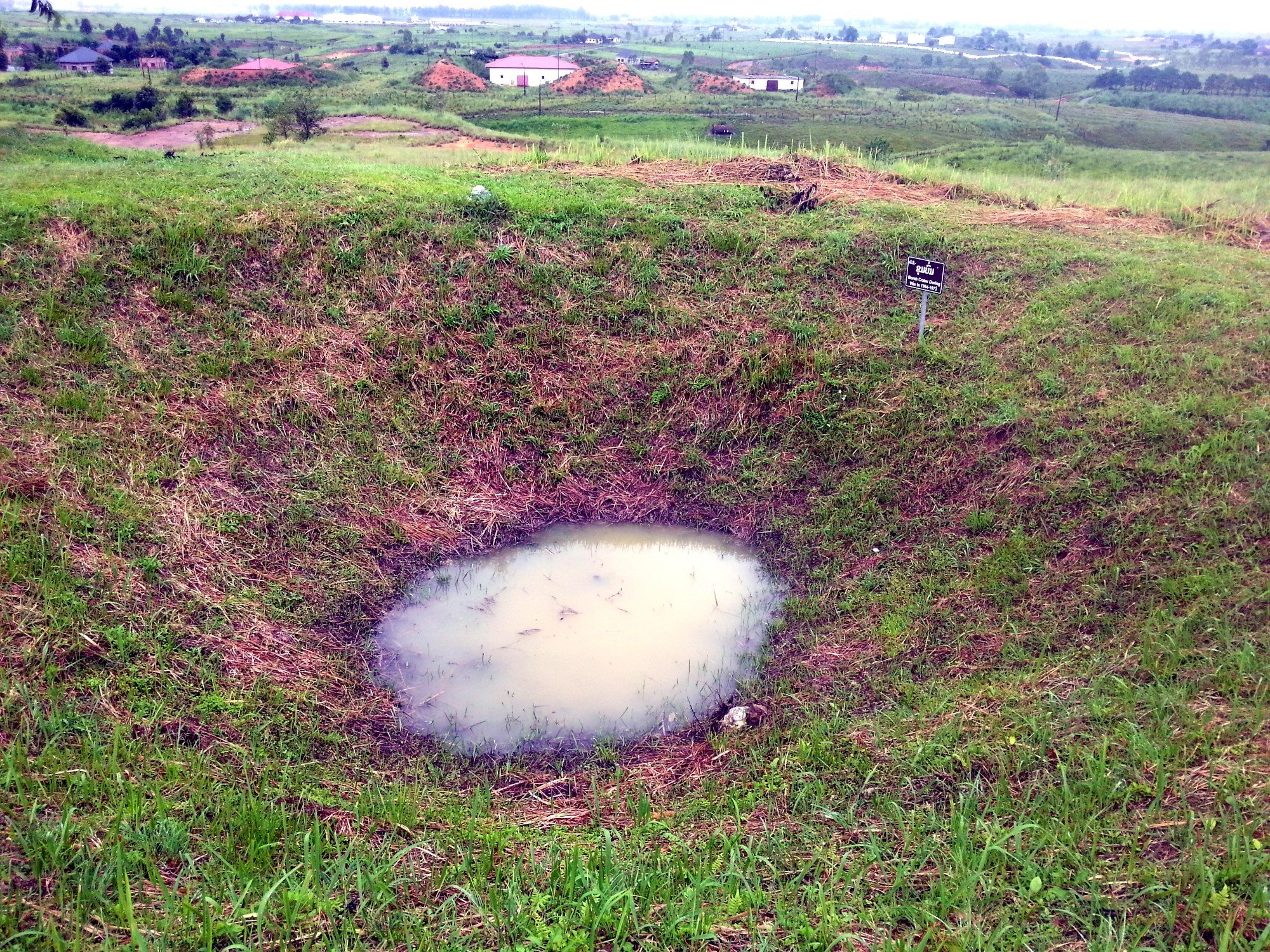 Another noticeable feature of Jar Site 1 is the bomb craters dotted around the jars. The Plain of Jars is believed to be the most bombed area in the world with the US Air Force having dropped an astonishing number of bombs, over 250 million, on the Plain of Jars from 1964 and 1973 in an unsuccessful attempt to stop the Prathet Lao (Communist insurgents) backed by Vietnamese forces from taking control of Laos. 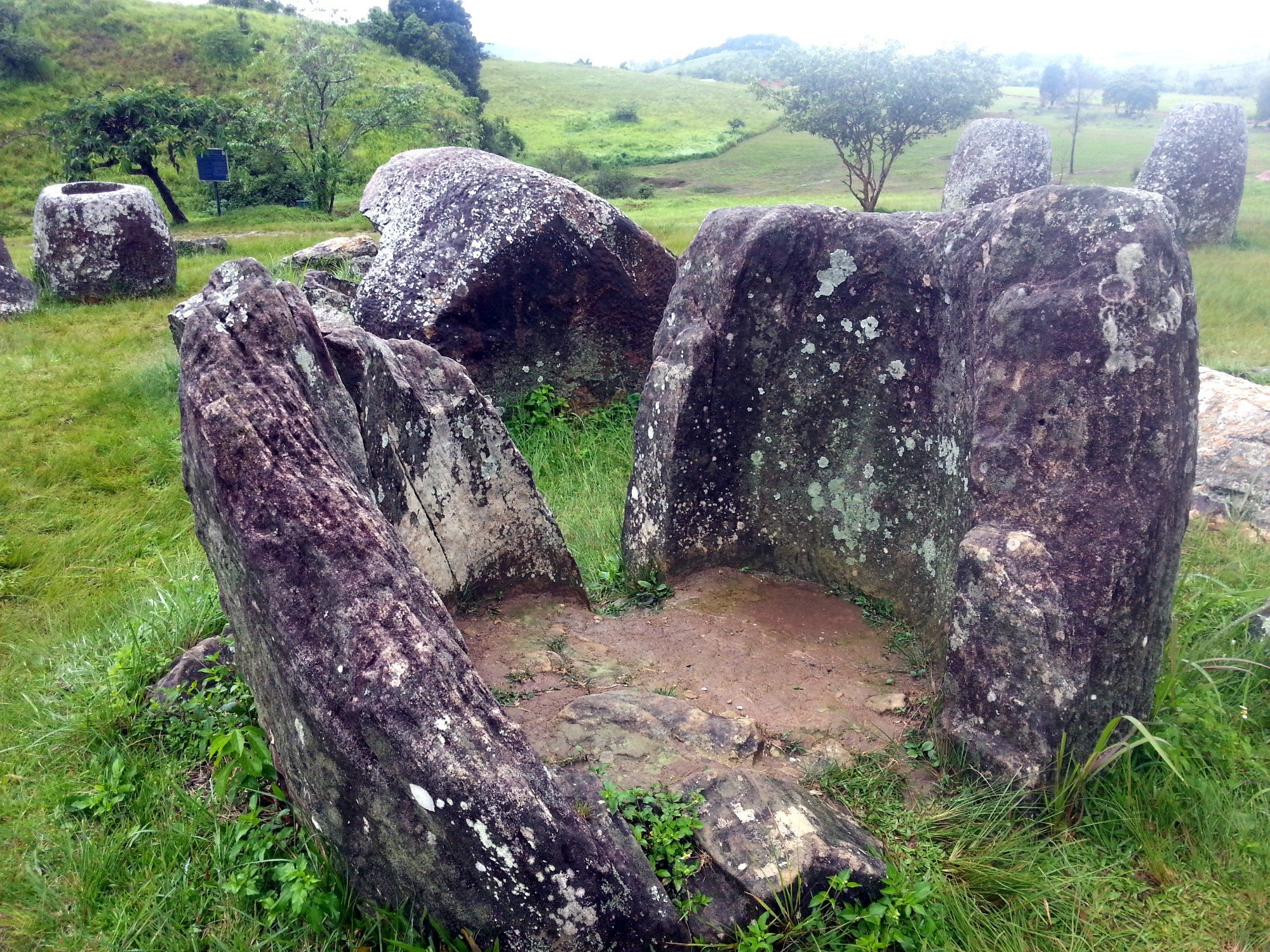 The almost incalculable damage caused by this futile bombing campaign is evident at Jar Site 1. A number of the jars have been smashed into pieces by the bombs. The human causalities have been far worse and people on the Plain of Jars are still being injured by unexploded ordinance more than 45 years after the bombs were dropped. This is the reason why many of the jar sites are inaccessible and visitors are advised to keep to the path on the  jar sites which are open to visitors: the chance of stepping on unexploded ordinance is a very real danger on the Plain of Jars. 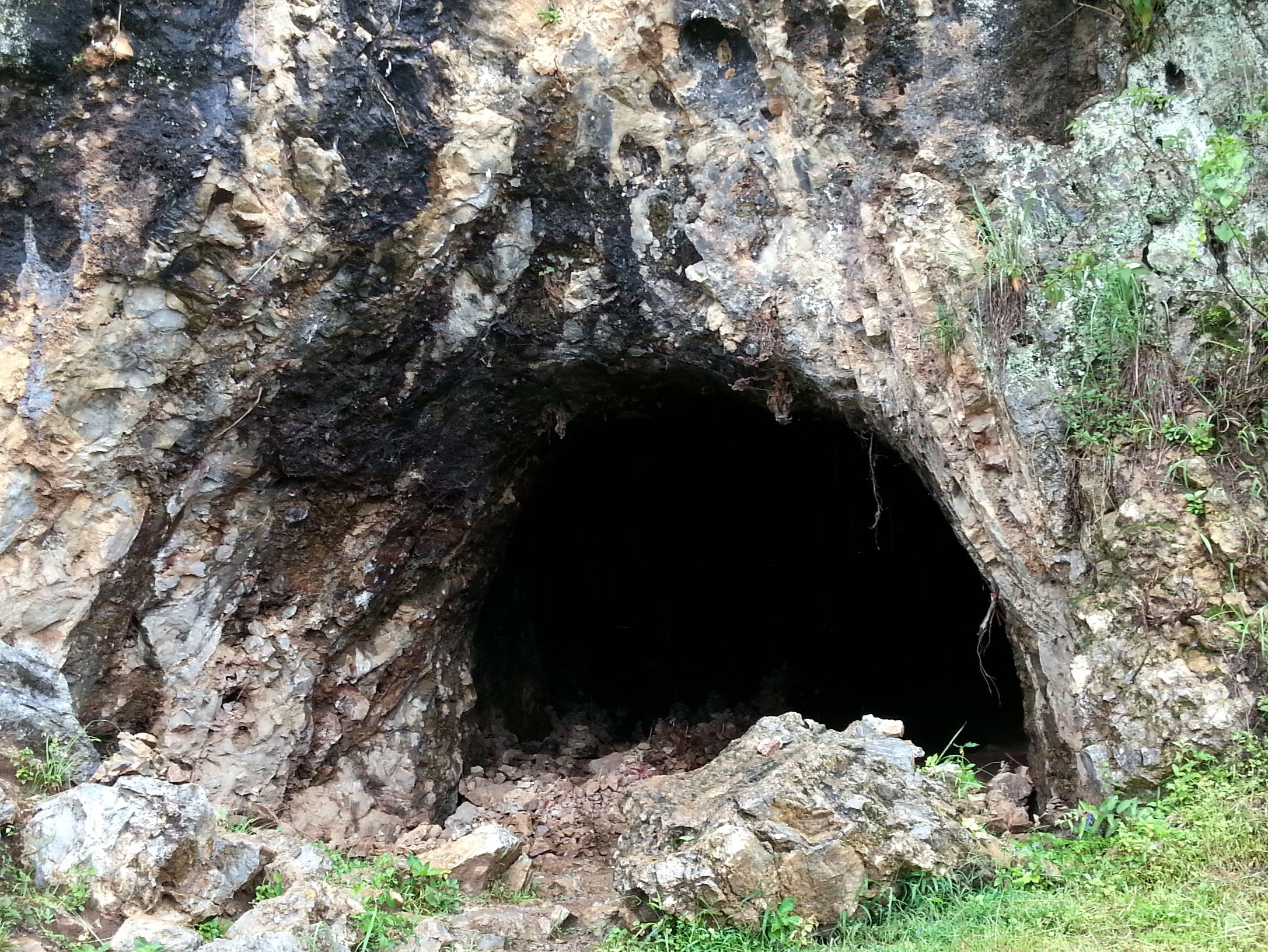 Entrance to the cave at Jar Site 1

Another unique feature of Jar Site 1 is the natural cave near to the jars. 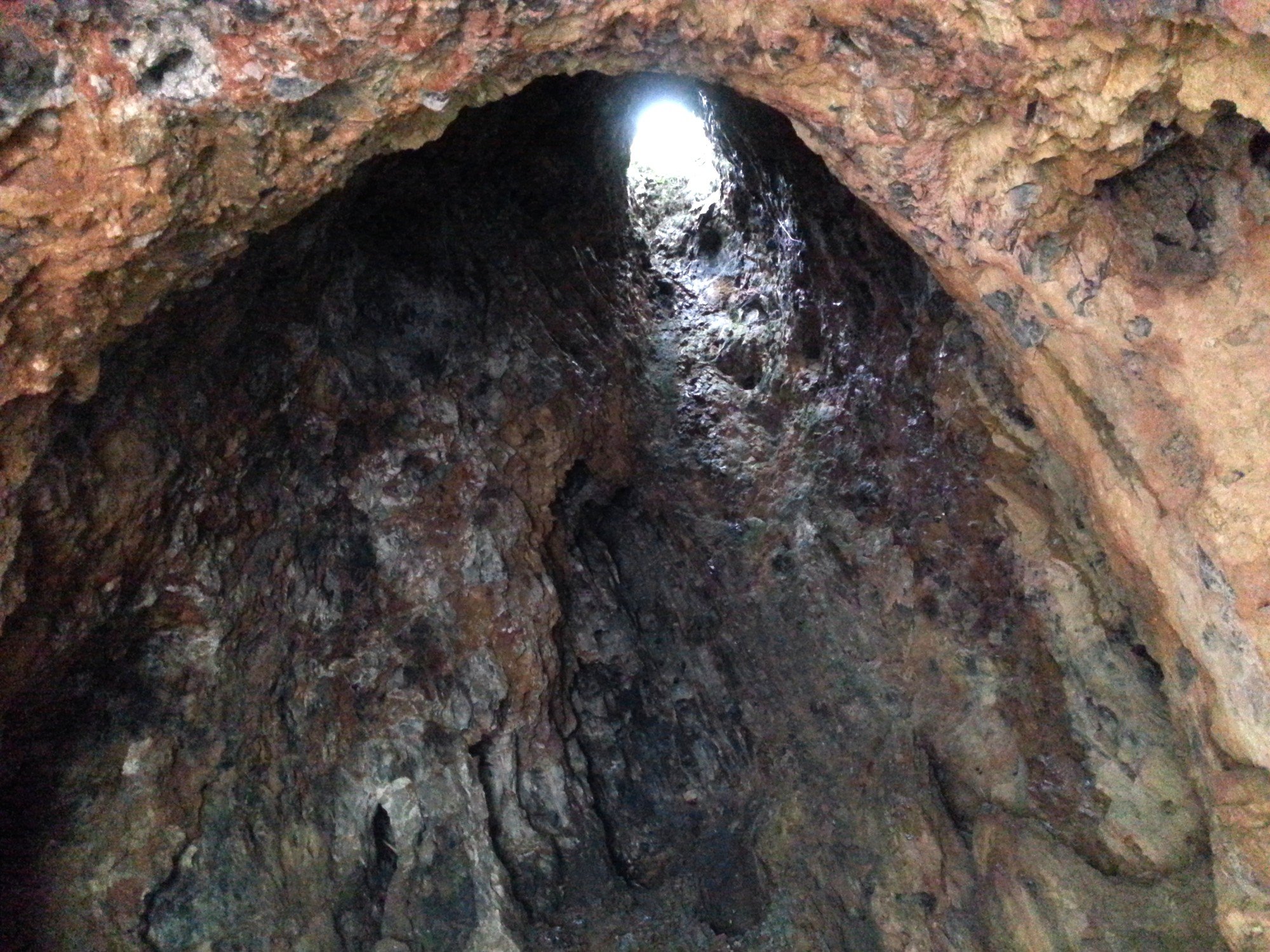 Chimney of the cave at Jar Site 1

The cave has a large chimney and analysis of the content of the cave suggests that it had been used for cremations, perhaps in ceremonies connected to use of the jars as burial chambers.

Next read about Ban Chiang National Museum in Thailand