Pha That Luang in Vientiane is the most important religious site in Laos, and a symbol of Laotian national identity. An image of Pha That Luang appears on 1,000, 5,000, 10,000 and 100,000 kip notes as well as on the National Seal used to endorse official documents. 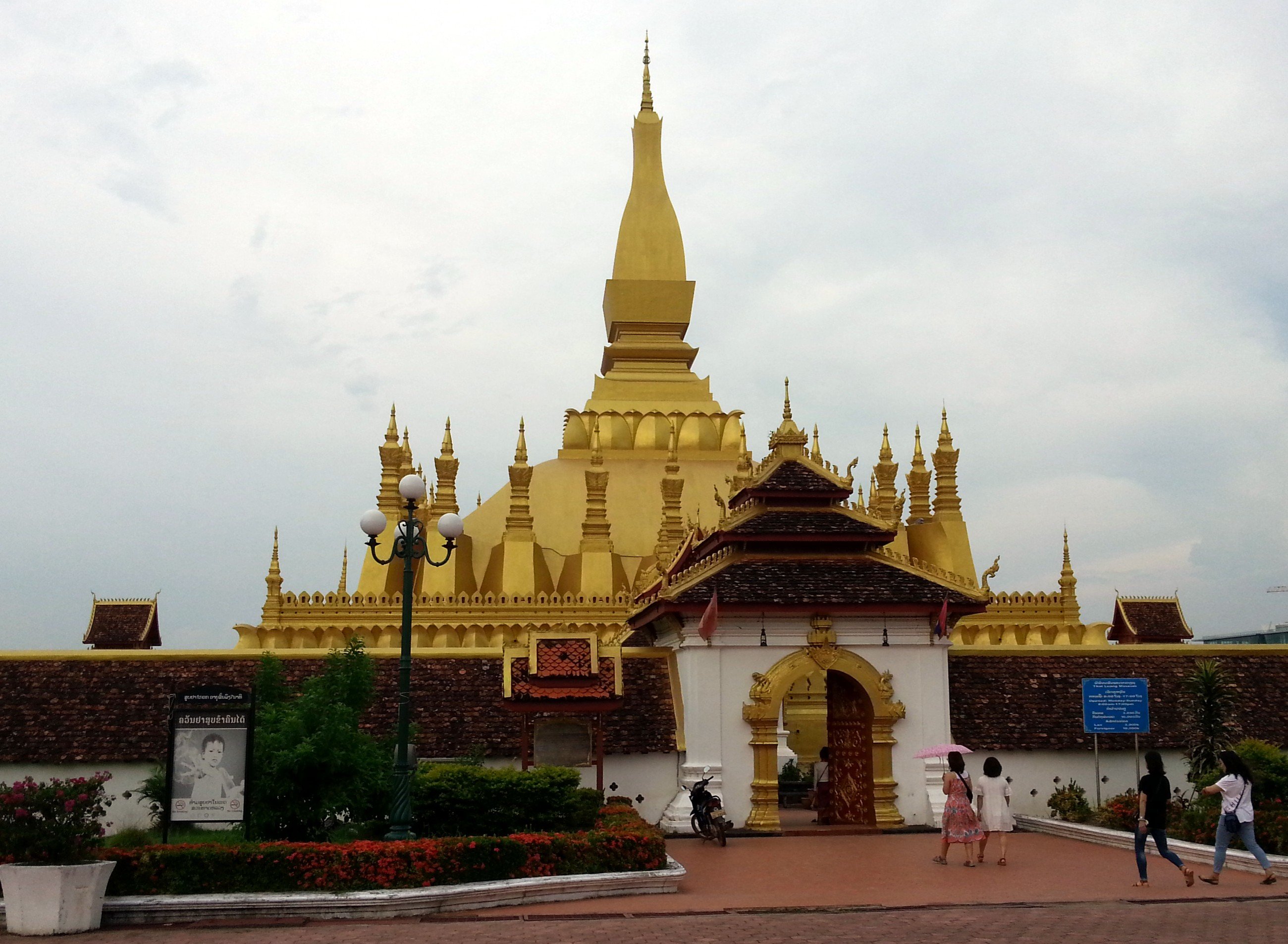 Pha That Luang is located to the north east of Vientiane city centre, 4.9 km from the popular Chao Anouvong Park on the banks of the Mekong River and 2.5 km from the Patuxay Monument. Pha That Luang pre-dates the construction of the modern city with the site of this important monument having been selected long before Laos’s rulers decided to make Vientiane the capital city.

About Pha That Luang

The history of Pha That Luang is a mystery: a religious monument of some kind has existed on the site of the modern day structure for a really long time, and there are some competing theories as to exactly how long this. Pha That Luang, in its current form, was created by the Laotian King Setthathirat in the late 1560s. King Setthathirat had decided to make Vientiane the capital of Laos instead of the more remote city of Luang Prabang. The construction of Pha That Luang, which means (roughly translated) the ‘great stupa’, was intended to improve the standing of the city, and also some historians speculated that the intention was to construct a monument to rival the great stupa of Chiang Mai, which was at that time the capital city of the rival Lanna Kingdom. 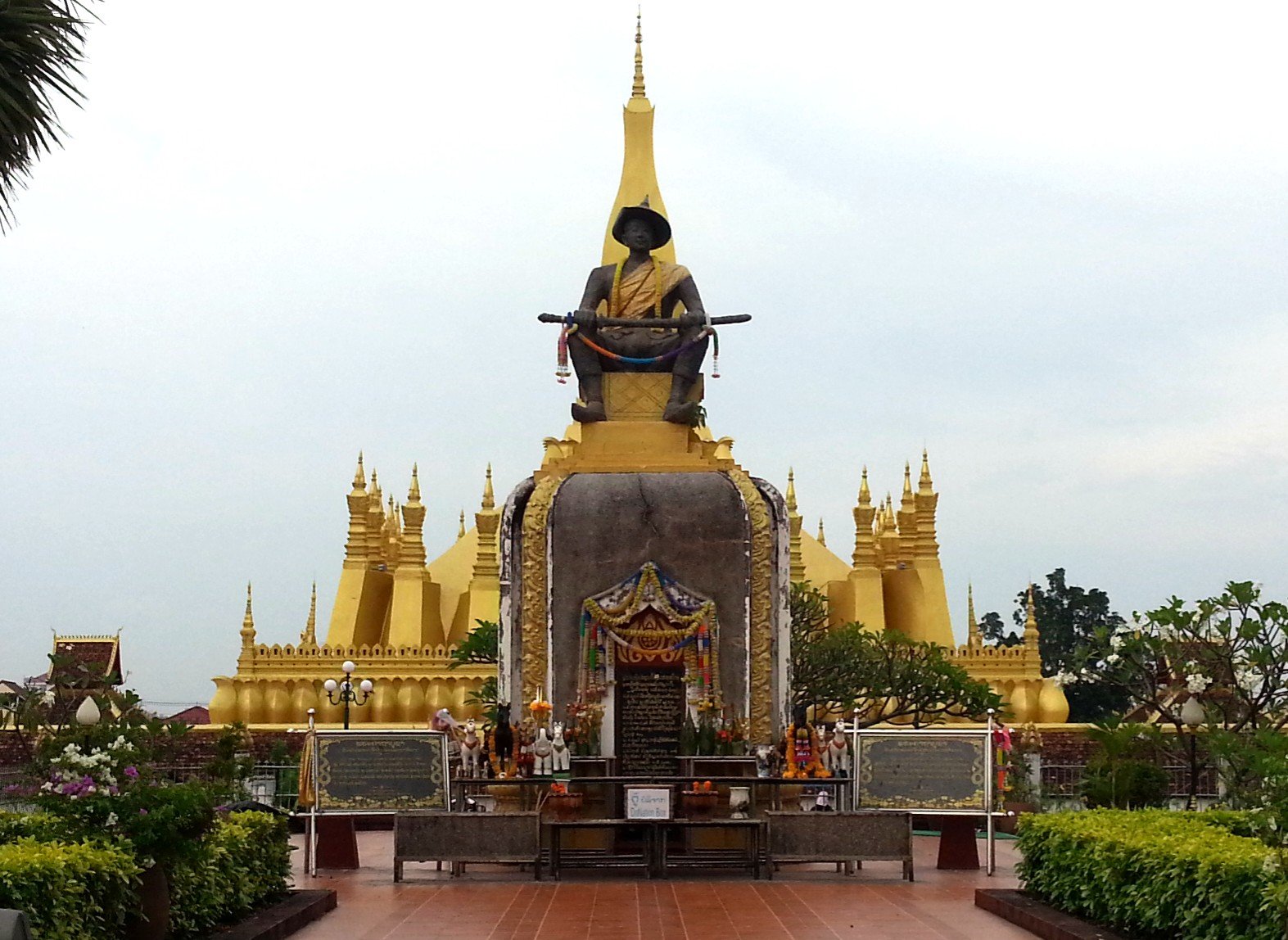 The history of the site before King Setthathirat is, however, less certain. Archaeological evidence, and local legend, suggest that Pha That Luang was constructed on top of a smaller stupa built during the reign of King Jayavarman VII in the late 12th century or early 13th Century. King Jayavarman VII was from the Cham ethnic group which at one point ruled large parts of South East Asia, particularly what is modern day Vietnam, and are believed to have been descended from settlers who came from Sumatra and Borneo. King Jayavarman VII was one of the earliest Khmer kings to believe in Buddhism. 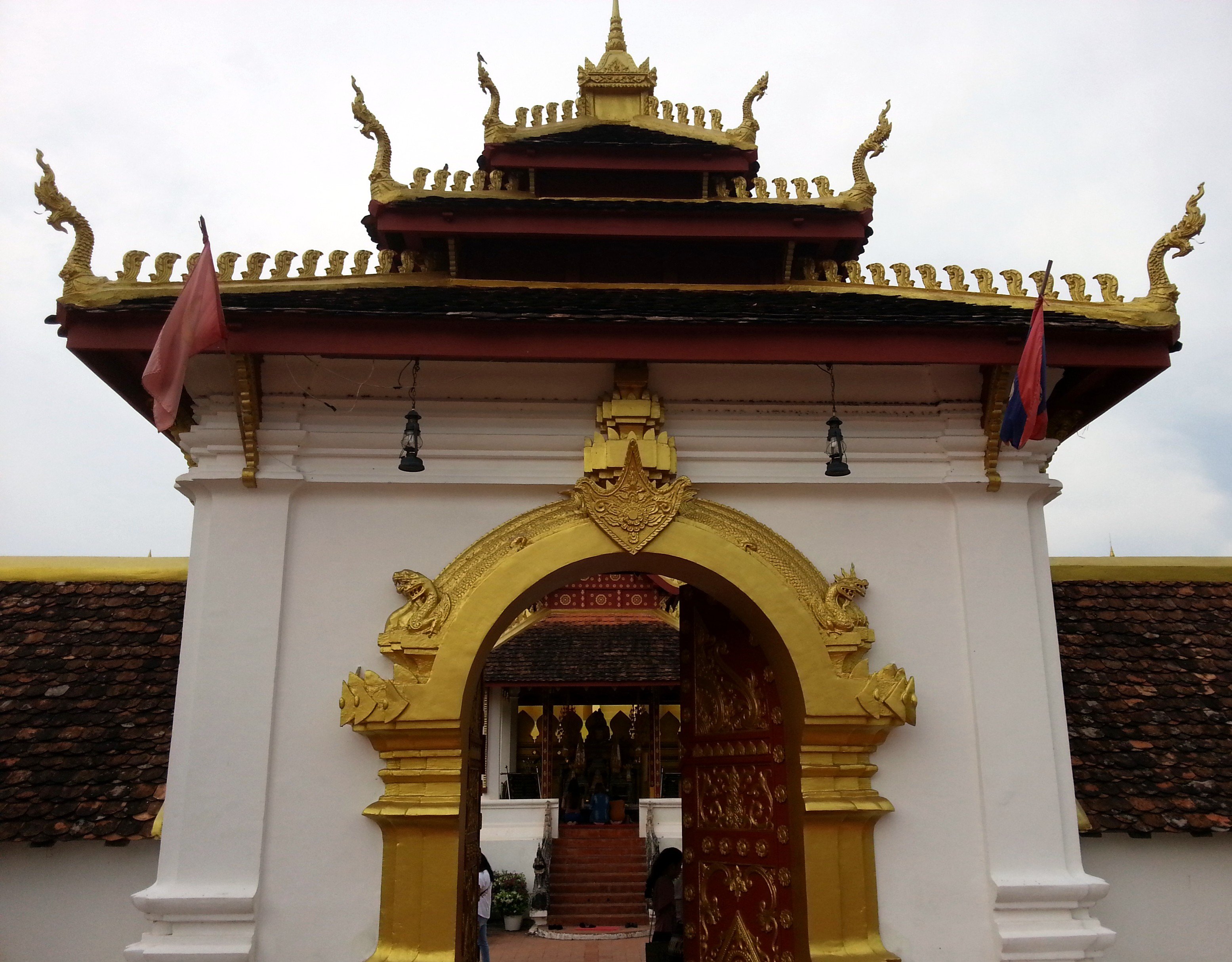 Main entrance to Pha That Luang

The legend of the site goes back even further than this. Some people believe that the reason King Jayavaram VII built his stupa where he did was to add a more impressive structure to a stone obelisk built some 15 centuries earlier to house fragments of the pelvic bone of Buddha. King Ashoka, the first Buddhist Emperor of India who reigned from around 268 to 232 BCE, sent Buddhist monks out to spread the religion across Asia and that they brought with them fragments of the Buddha’s body to place in temples across the region. The legend is that some of those fragments ended up encased inside a very old monument on top of which Pha That Luang has been built, which adds greatly to the significance of the site to Laotian Buddhists. 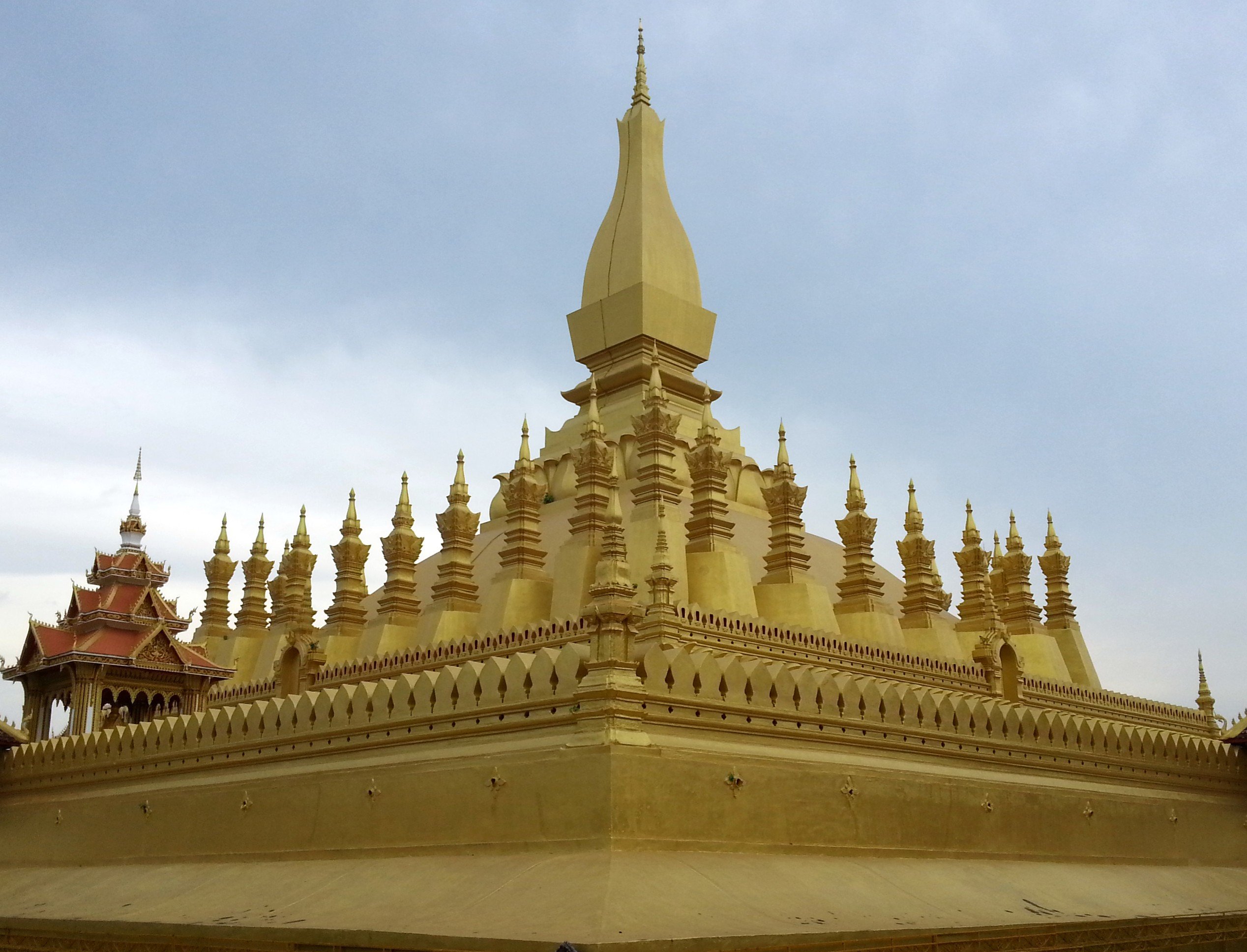 30 smaller stupa surround the great stupa at Pha That Luang

Whatever the ancient history of the site, Pha That Luang is an impressive structure with a base measuring 67 metres in width and a stupa rising 44 metres above ground level. The structure has three levels. The first level is a base topped with 30 smaller stupa each bearing a gold plate with an inscription bearing words relating to the four noble truths of the Buddhist faith. The second level is a curved dome topped by leaves of the lotus flower and the third level is a tower ending in a sharp point. The stupa is itself enclosed by four walls stretching approximately 350 metres around the four sides of the Pha That Luang. The area underneath the roofs of these walls is now used to display statues which have been uncovered during excavations of the site. 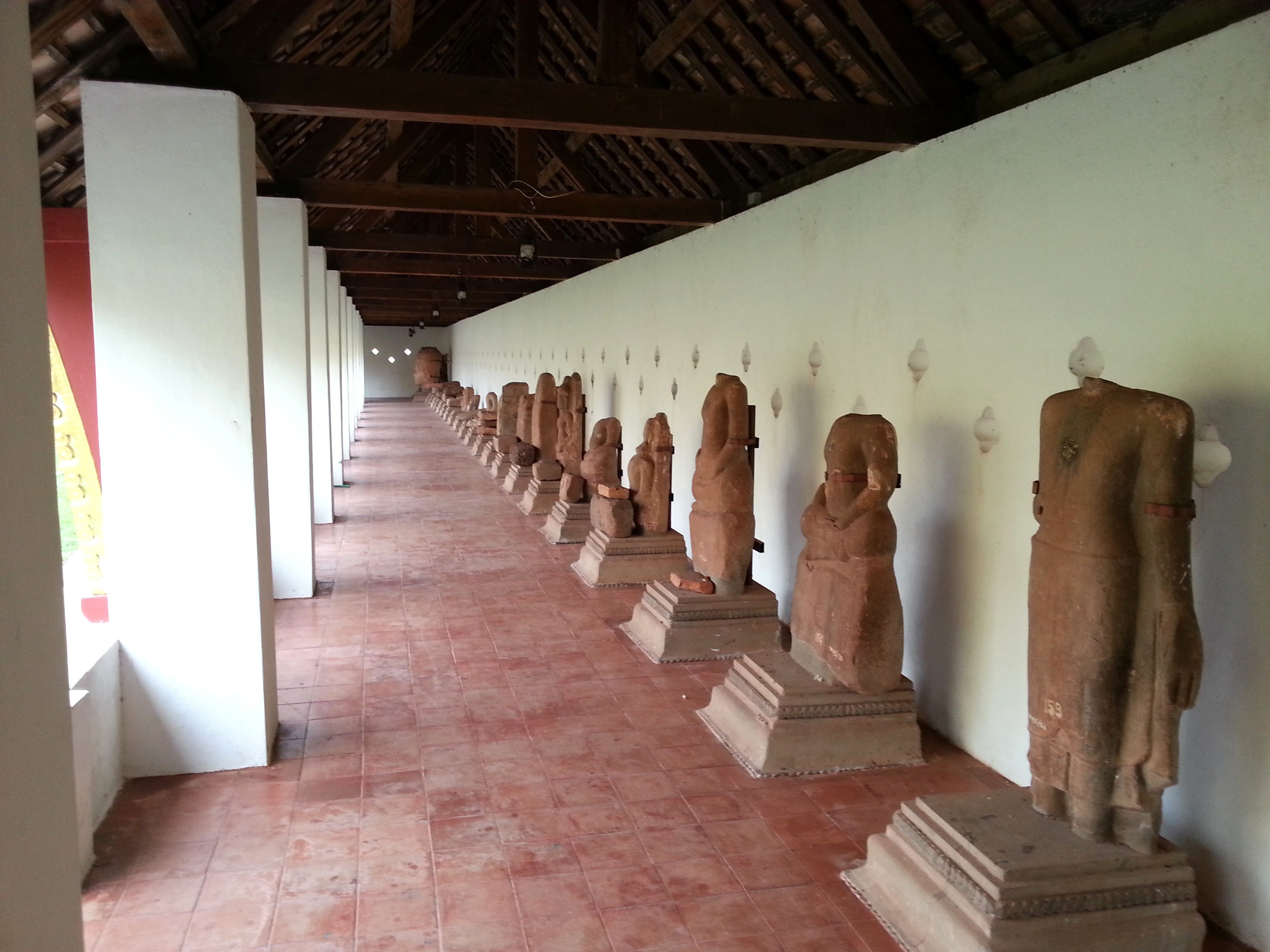 Statues found at the Pha That Luang site

Pha That Luang has been partially rebuilt and renovated several times since the time of King Jayavarman VII. Chinese, Burmese and most notably Thai armies have invaded Vientiane lots of times during the last 4 centuries and Pha That Luang has been intentionally damaged and looted by the invading forces. The worst damage was done by the Thai army during the war of 1828 and Pha That Luang was left in ruins for more than 70 years until its restoration under the patronage of the French colonial rulers first (unsuccessfully) in 1900 and then again in 1930.The stupa was again damaged by bombs dropped by the Thai airforce in the Franco-Thai war of 1940 to 1941 and needed more repair work undertaken. The most recent renovation to Pha That Luang took place in 2016 & 2017 with much of the gold leaf covering the stupa replaced. 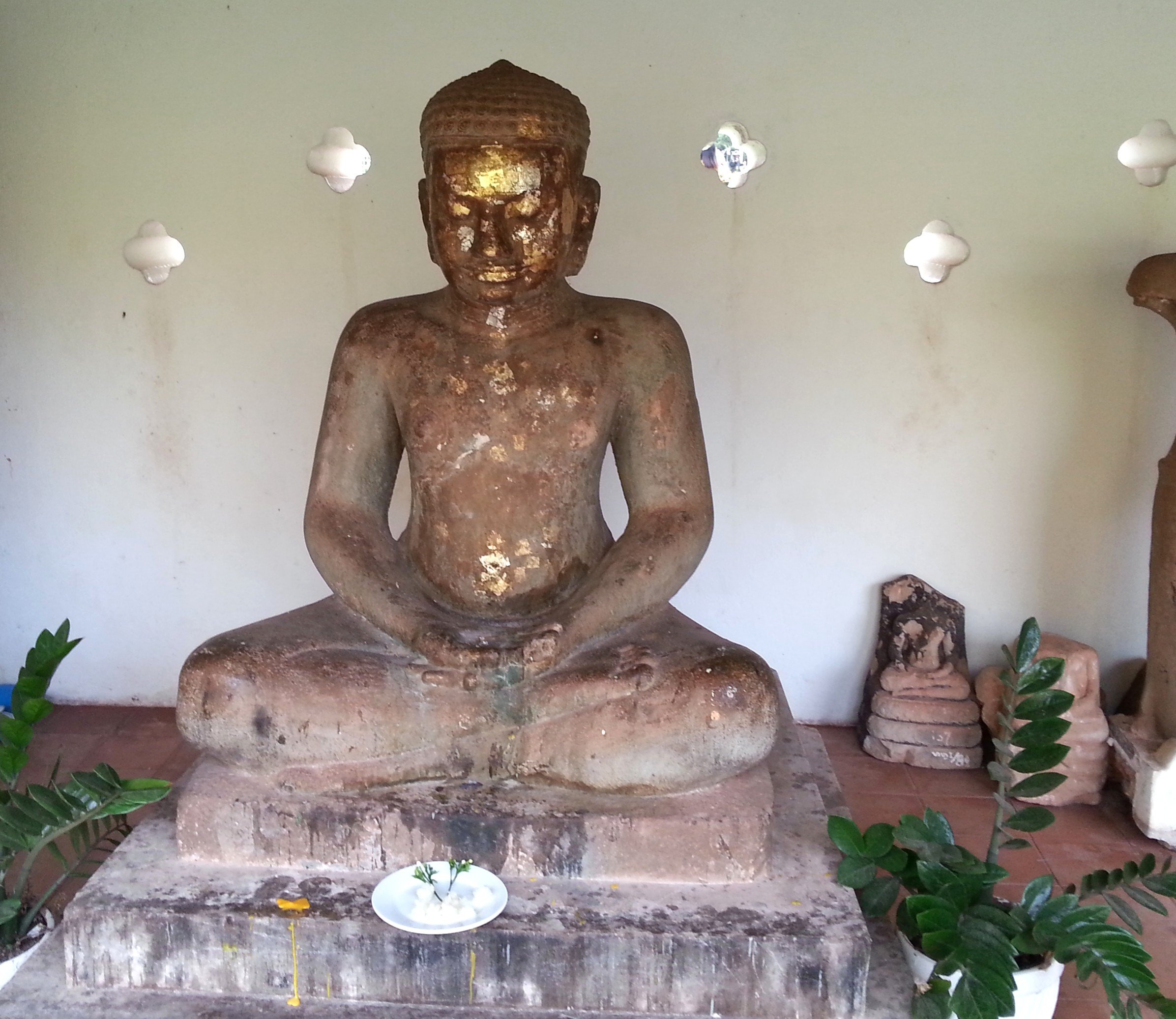 Every year in November the That Luang Festival takes place. The festival starts with a candlelit procession around an important temple and other locations in the city before moving onto the great stupa the following afternoon. The That Luang Festival is the major event in the Laotian religious calendar and large numbers of people attend, including many Laos people living abroad. If you you plan to visit Vientiane at this time make sure you book your transport and your hotels well in advance as the city gets very busy.

Travel to Pha That Luang

Vientiane can be reached by road, by air and there is a single train station in Laos a short drive from Vientiane with connecting train services to Thailand. For more information about travel to Vientiane click on the links below:

For travel within Vientiane to Pha That Luang you need to take either a taxi or a tuk tuk. Pha That Luang is located a long way from where most of the hotels and guesthouses are located and chances are that it will be much too far to walk there.

Next read about Big Buddha Temple in Koh Samui