Thailand is the most visited country in South East Asia, which long been a favourite destination for Western tourists and is emerging a popular destination for tourists from other Asian countries. Less well known is Thailand’s growing importance as a regional economic power with a thriving manufacturing centre for the automotive industry and the production of computer components. Whilst a large segment of the population lives in small villages and work on the land, a increasing proportion of the population live in urban areas and have the disposable income to embrace Western consumerism. Thailand has moved on being a developing nation to being a ‘part’ developed nation mixing wealth with poverty, new with old, insular traditional views with modern dynamic trends embracing international culture, technology and modern social norms.

Thailand is a country which is fiercely proud of its culture, which many Thai people believe to be unique and distinct to other South Eastern Asians. Thailand is particularly proud of its claim never to have been colonised by a foreign power unlike Vietnam, Laos, Malaysia, Cambodia and indeed all the other countries which now form the ASEAN group of countries, which is South East Asia’s version of the European Union. Many Thai people are also very proud of the perceived ethnic homogeneity of the people’s of the modern Thai nation, a reason why at times some Thai people feel unhappy that their country is home to increasingly large numbers of people from other parts of the world who come to Thailand to work, do business, enjoy the wonderful scenery and welcoming culture. Like all national myths, the Thai myth has a basis in truth, but has its own contradictions and that truth has been twisted for political gain by political figures for personal gain. Thailand is a country of several ethnicities, languages and religions which coexist side by side (mostly) harmoniously. Thailand has had a long history of foreign involvement and invasions, indeed the modern ‘Thai’ people migrated to Thailand from Southern China in the 11th Century displacing the early residents of Thailand whose origins were from the Sub-Indian continent. Underlying the belief in Thai unity the country suffers from a range of deep social divisions, between Buddhists and Muslims of the southern regions, between people in the prosperous South and Central regions and the people in the less prosperous North-East who rely on rice production and speak a different language. Thailand is also working its way through highly divisive political differences between Thai people who favour modern democracy, and those people who favour older governmental systems as a solution to incipient corruption in the Thai public sector. These conflicts simmer beneath the surface of outwardly appearing unified nation, causing periodic political upheavals and frequent military coups for which Thailand is becoming (sadly) famous for.

There are four main forms of public transport in Thailand: bus, minivan, train and domestic flights. Thailand is big country and overland journeys tend to be relatively slow, particularly trains, and for this reason internal flights with budget airlines such as Thai AirAsia and Nok Air are a popular option for both foreign and domestic travellers. In Thailand people with relatively low incomes often choose to fly if they have a long journey to complete because flight prices are relatively cheap. The majority of journeys in Thailand, however, are still completed by bus, train or minivan because the coverage of regional airports in fairly thin. Popular destinations such as Koh Phangan, Ayutthaya and Kanchanaburi do not have their own airport and you have no option but to travel their overland, or by ferry. 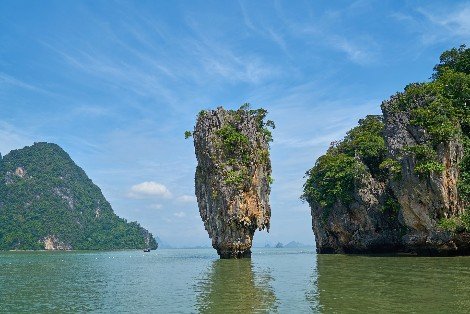 If you visit Thailand then more likely than not you want to visit some of the islands and this will mean taking a ferry or boat of some description. Public ferries come in all shapes and types in Thailand, and depending on where you are planning to go you may end up travelling on anything from a small wooden boat to large high speed ultra modern ferry. For example, to reach Koh Jum you need to travel in wooden boat which two people wide from Laem Kruat Pier in Krabi . By comparison, on the journey from Surat Thani to Koh Phangan you travel in a high speed catamaran with two sundecks, on board toilet and a shop.

Thailand has a rice based cuisine which is most famous for watery curries featuring hot and sour tastes. Beyond tom yam soup and green curry Thailand has a broad lexicon of food recipes encompassing a range of regional and cultural differences. For the willing, Thailand is an adventure in food with surprising combinations of flavours and ingredients, some of which are difficult to digest for non-Thai people such as unripe fruit and fermented fish and shrimp flavourings. The predominant foreign influence on Thai cuisine is Chinese cooking, and by that we don’t mean American style Chinese food but rather the traditional foods of China. Some Chinese recipes came with the Thai tribes who migrated to Thailand a 1,000 years ago others came more recently with later contingents of migrants from China, such as the Li people formerly of Hainan Island in Southern China.

The main religion in Thailand is Theravada Buddhism which according to Thailand’s government account for 94.5%, although this figure is perhaps to be treated with some caution as people who believe in religions with no official recognition (such as folk religions and Chinese religious movements), or indeed people with no religious affiliations at all,  are often classed as adherents of Theravada Buddhism by default. The next largest religious group recognised in Thailand are Muslims who account for 4.29% of the population. The only other statistically religious group in Thailand are Christians, who account for 1.17% of the population.

Things to do in Thailand

For most foreign visitors to Thailand the country can be divided into three parts. The most popular part of the country is the upper Southern regions of Surat Thani, Krabi and Phuket famed for their wonderful beaches, clear waters and laid back island lifestyle. In the centre of the country Bangkok and Ayutthaya are known for their temples and palaces, as well as the shopping opportunities of Central Bangkok and its colourful nightlife. The third area which is commonly visited is the Northern Region, with the cities of Chiang Mai and Chiang Rai attracting large numbers of visitors to see the ancient temples of the Lanna Kingdom. The Northern Region also offers opportunities for trekking and biking in the mountains. Other lesser visited areas include the mountains of Tak and Loei, the Golden Triange near the Laos border and the Eastern region near Chanthaburi with its undiscovered beaches and historical towns.