There are three ways to travel from Vientiane to you Bangkok.

There is single direct service a day from Vientiane to Bangkok which is available to book online.

Use the Search Form to purchase your bus tickets from Vientiane to Bangkok.

Direct bus services from Vientiane to Bangkok depart from outside the Khop Chai Deu Restaurant on the Rue Setthathilath in Vientiane.

Bangkok is a large city with a population of over 8 million people. It is also a very diverse city mixing old and modern, poor and rich, all side by side and in close proximity to each other. The massive slum of Khlong Toei is only a few hundred metres away from the luxury apartment blocks and expensive restaurants of the Sukhumvit Road. The commercial centre of Silom is a short distance down the river from the historical buildings and temples of the Phra Nakhon District of the city. The huge modern shopping centres of Siam Square are surrounded by large numbers of informal street side stalls selling cheap facsimiles of the much the same products. Bangkok is large vibrant city of contradictions and a frenetic pace of life, and unusual smells, which will appeal to some visitors and be a vision of hell to others. 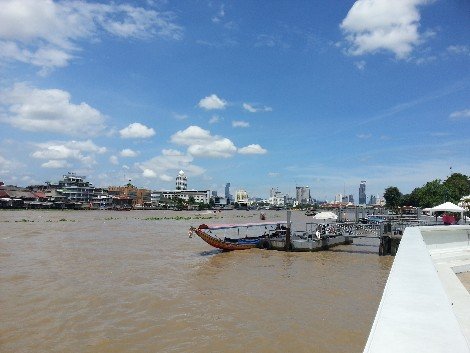 The first and most important thing for a visitor to Bangkok to remember is that Bangkok is city of villages, each with their own very different character. Your experience of Bangkok will depend very much on where you to choose to go. For many backpackers the ‘go to’ area is around the Khao San Road, which is near the Chao Phraya river to the north of the Grand Palace and Bangkok Train Station. This is a long standing ‘backpacker’ area traditionally associated with cheap accommodation, cheap food and a permissive attitude to foreigners enjoying a night out in the bars. The Khao San Road is no longer the cheapest place to stay in Bangkok and the fast food chains have moved into the area. It is , however, an easy introduction to the city for younger travellers on a smaller budget or simply in search of like minded company. Older travellers and those with a larger budget, and higher expectations of comfort, are better off heading toward the Sukhumvit and Silom Road areas which have fantastic hotels and international quality restaurants, some with a level of sophistication on a par with London or New York, at great value for money prices. The more adventurous traveller who wants to stay away from the most popular tourist areas should head toward to the city’s China Town area near to Bangkok Train Station. China Town is packed full of markets, temple and great places to eat.

Next read about Travel from Bangkok to Koh Phangan