Wat Chanthaboury, also known as Wat Chan, is a Buddhist temple located on the popular riverfront road near to Chao Anouvong Park in Vientiane in Laos. 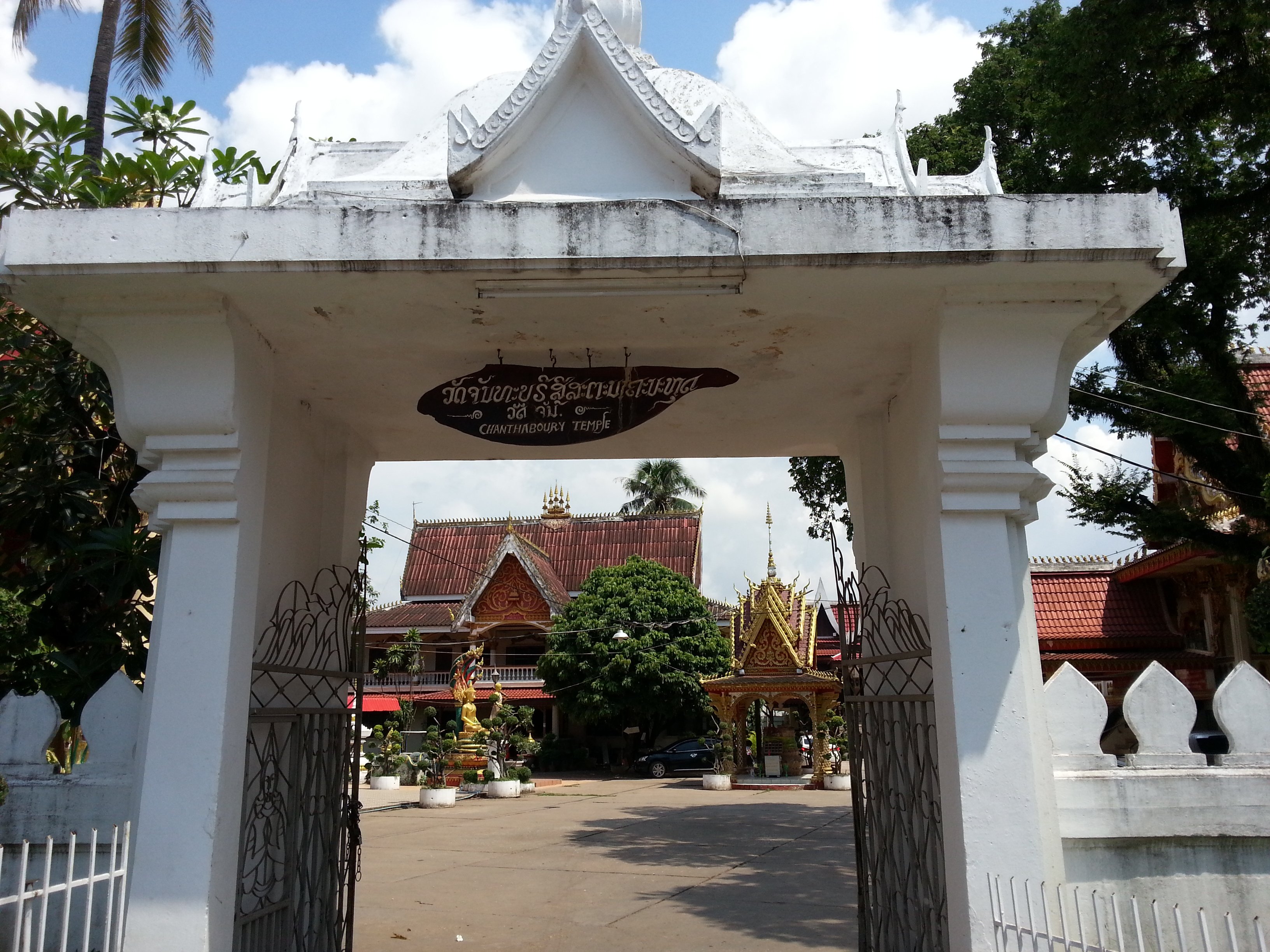 Wat Chanthaboury is an active temple with monks in residence which is free to visit every day between 05:00 and 20:00. Like all Buddhist temples in Laos, visitors should wear clothing which covers their legs and shoulders and remove their shoes when entering temple buildings.

There are lots of interesting things to see within the grounds of Wat Chanthaboury. The main building is the ornate Congregation Hall in the centre of the temple. The Congregation Hall has all the classic features commonly associated with Buddhist temples in Laos, including a tiered roof, the gable ends of which are elaborated decorated in gold leaf. The balustrade to either side of the steps up to entrance are in the shape of ‘naga’, which are mythical serpents closely associated with both Buddhism and Hinduism. According to Laos mythology naga inhabit the Mekong River. 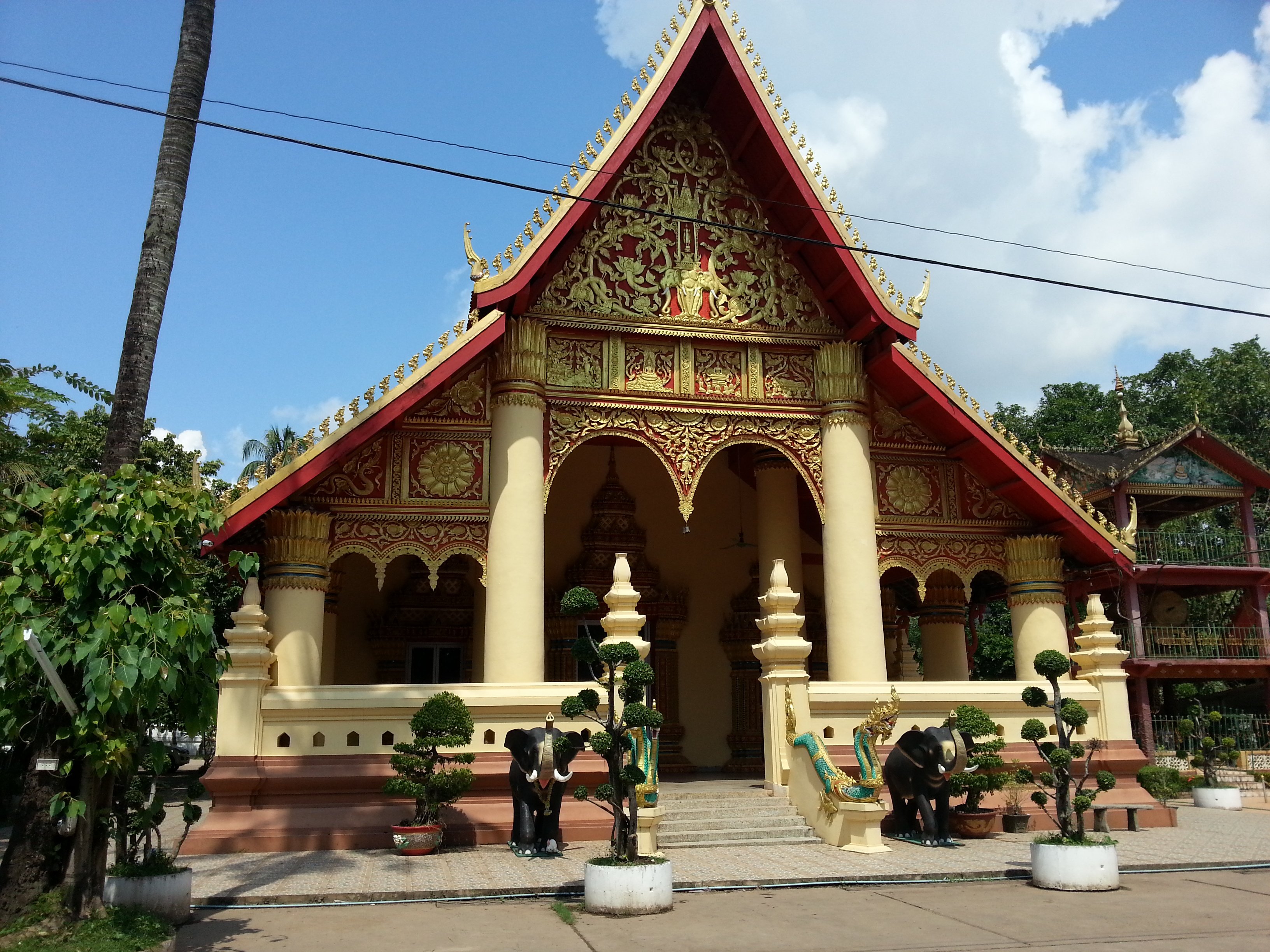 Beside the Congregation Hall is a statue of the Buddha seated in front of a seven headed naga. The seven headed naga is the King of the Serpents, Mucalinda, who according to Buddhist tradition protected the Lord Buddha from a storm which lasted for the duration of the fifth week of the meditation session during which he achieved enlightenment. 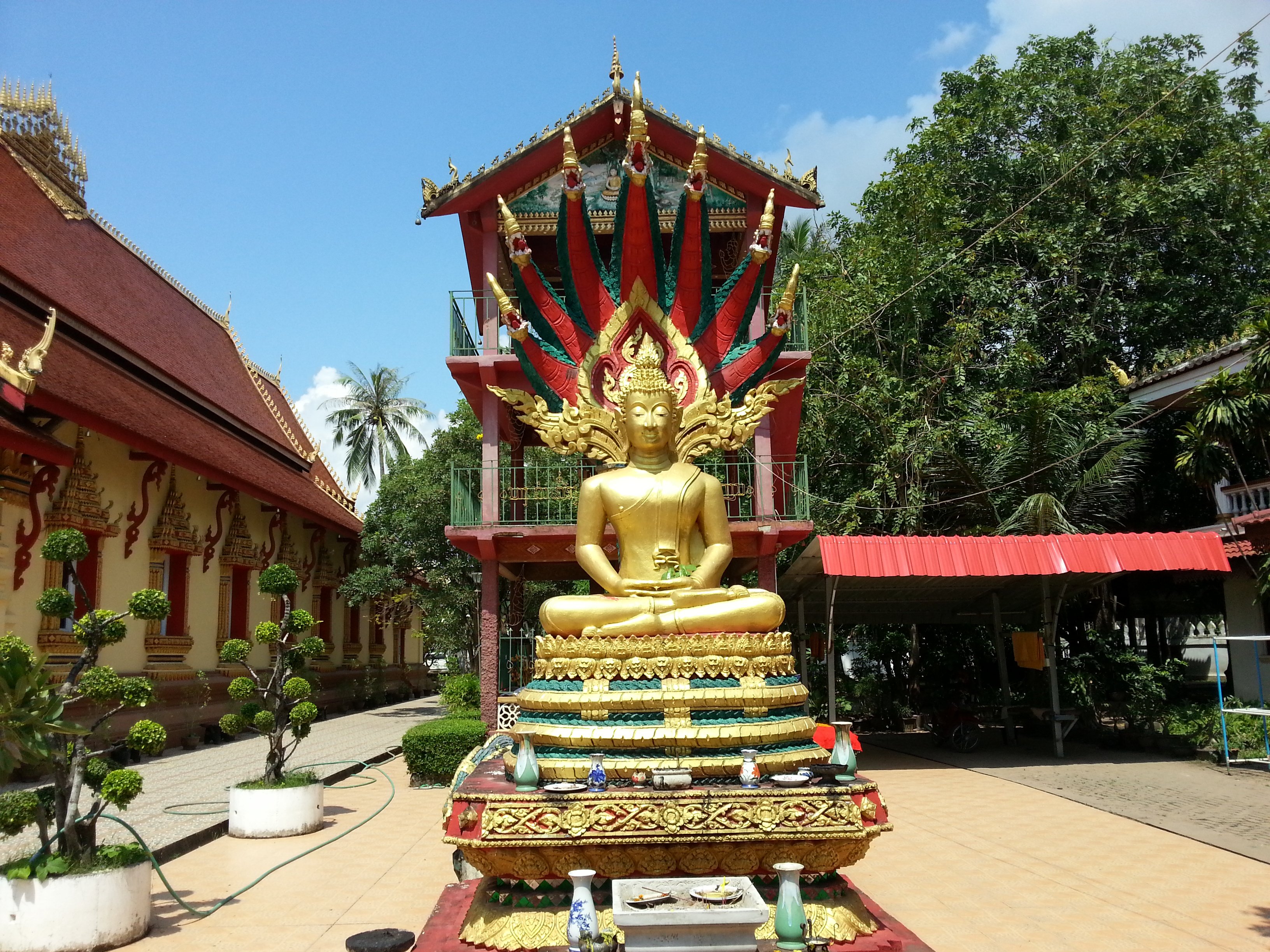 Behind the Buddha statue is a three tier drum tower. The drum is on the second tier. Drum towers are a traditional feature of ancient Asian cities, commonly used as symbolic marker for the centre of a city. 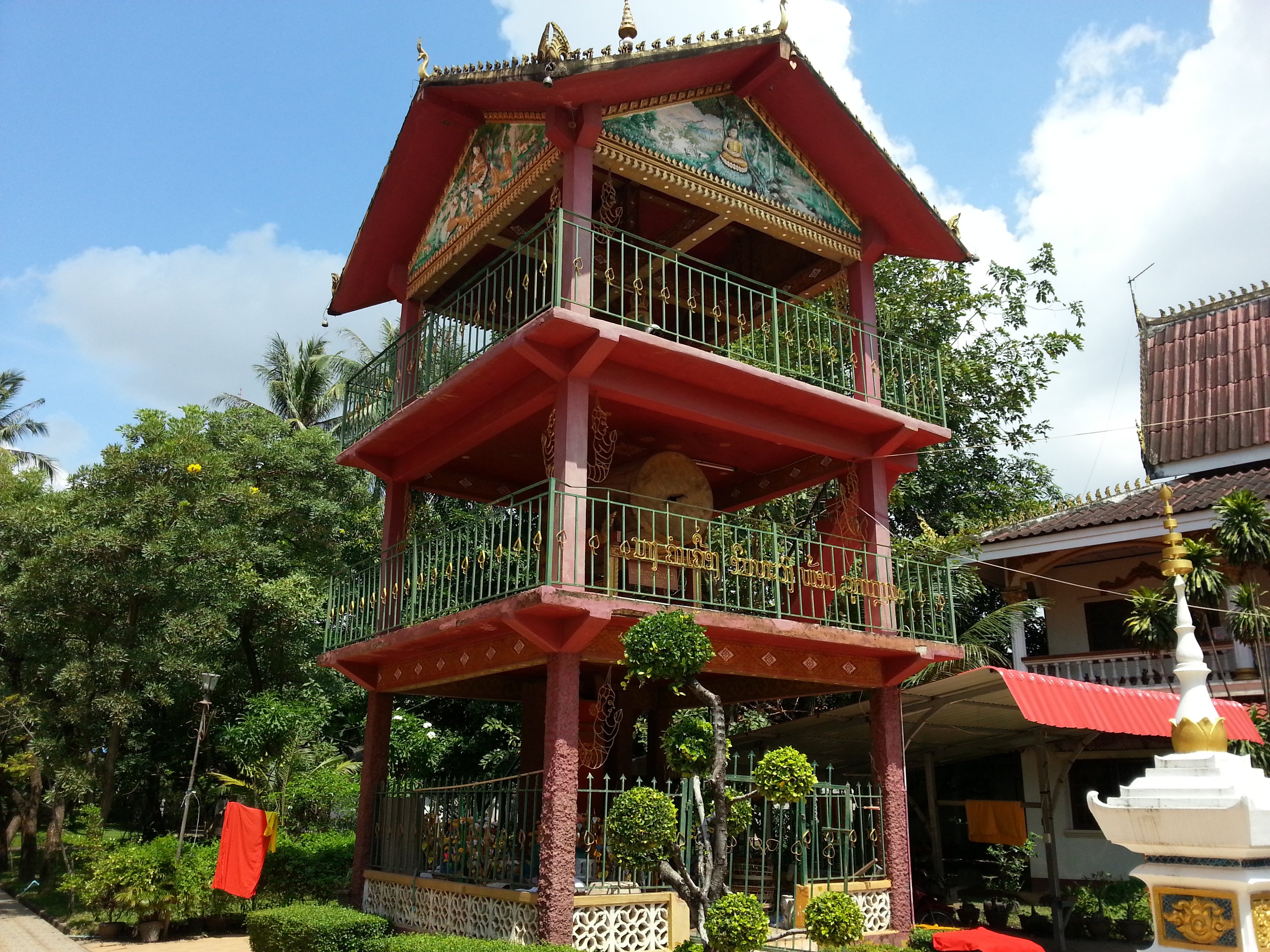 To the side of the Congregation Hall is a more modern prayer hall which has a carpet and fans, and is the place where the lay congregation comes to worship with the monks of the temple. 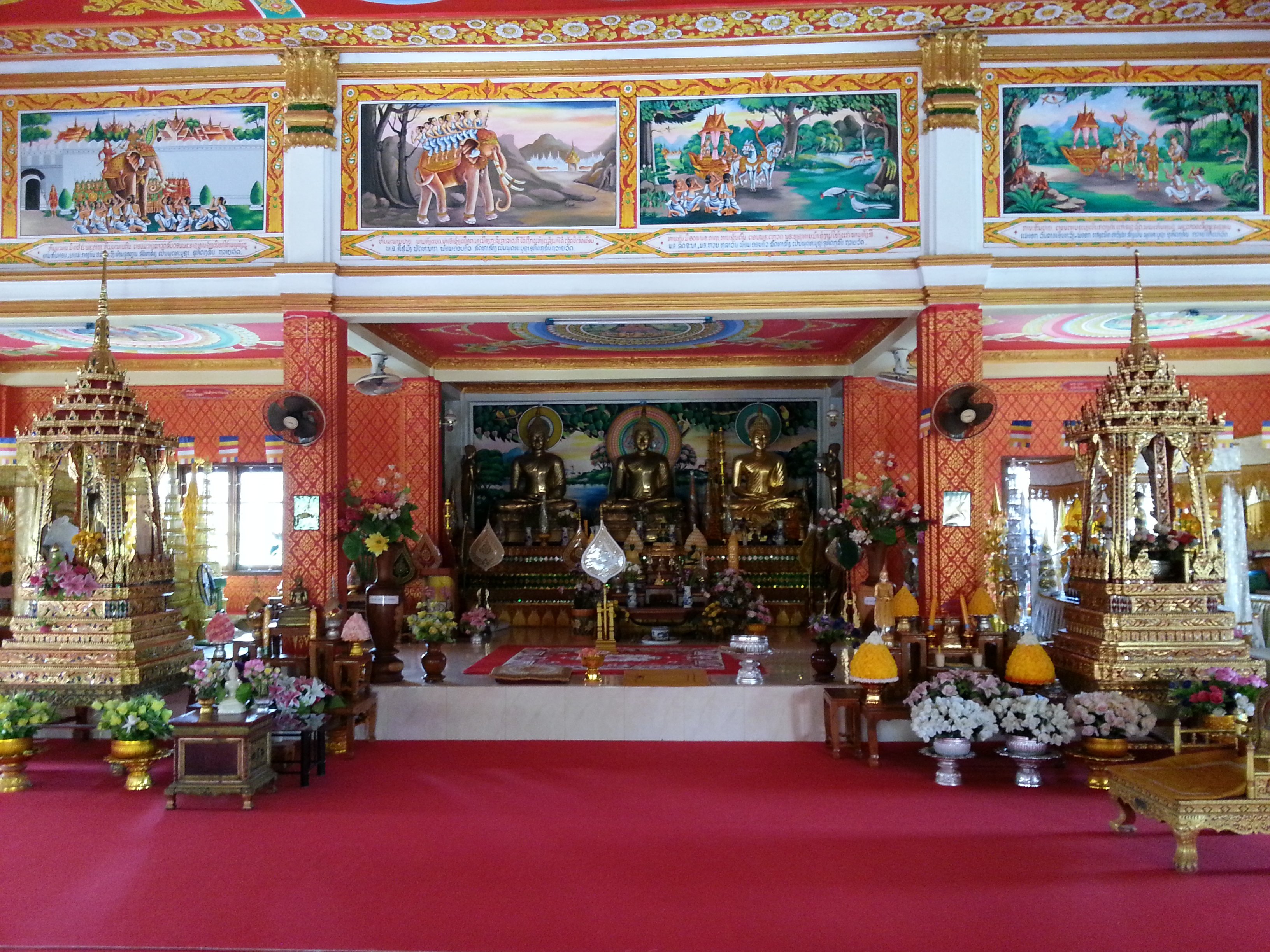 Shrine in the prayer hall at Wat Chanthaboury

The central feature of the prayer hall is a shrine with three seated brass Buddha statues. 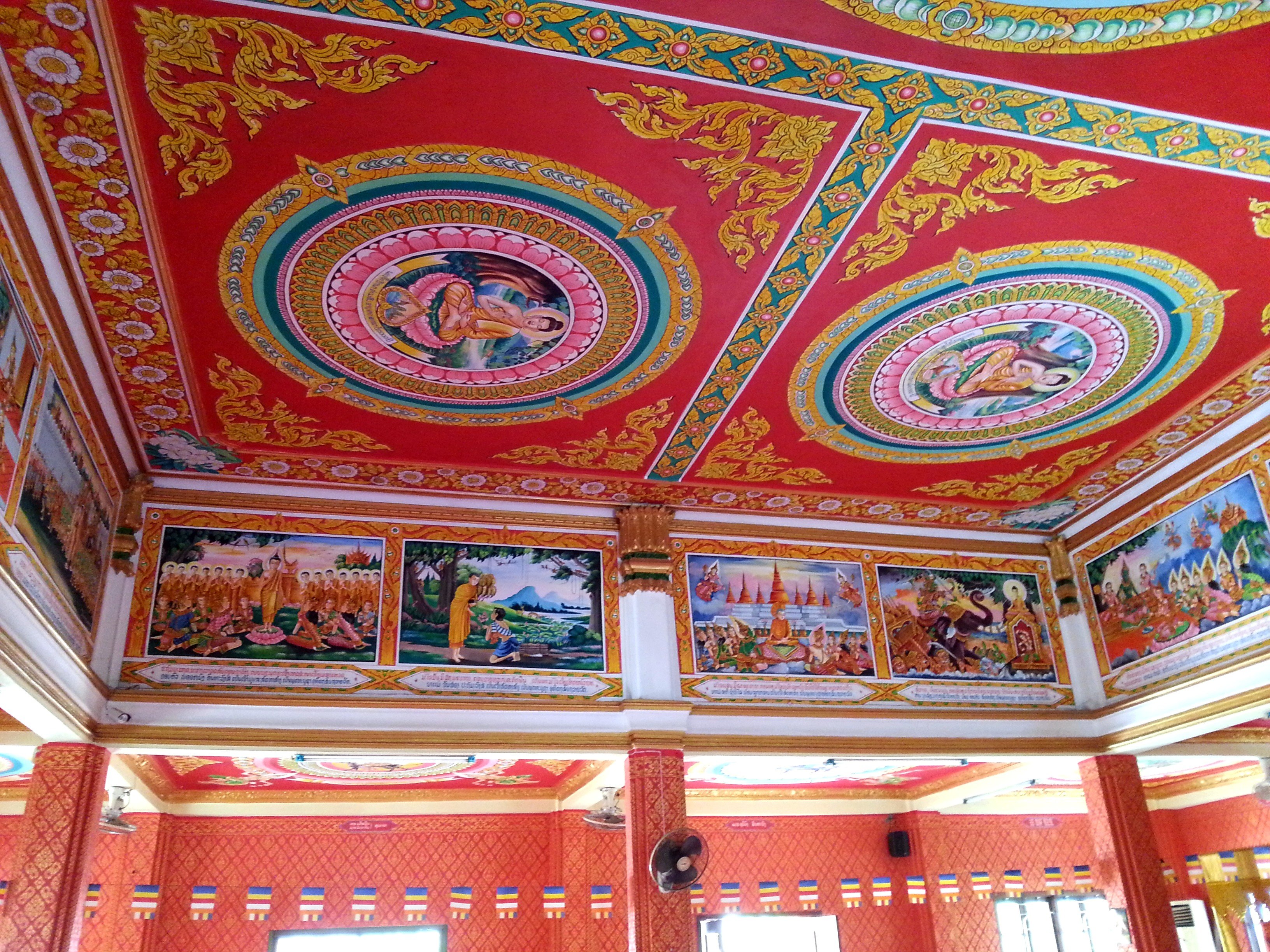 The walls and ceilings of the prayer hall feature detailed murals depicting stories from Buddhist tradition.

Wat Chanthaboury is located on the Quai Fa Ngum in Vientiane.

Next read about Penang Hainan Temple