Wat Ong Teu is Buddhist Temple in the centre of Vientiane which dates back to the 16th Century having been constructed shortly after Vientiane became the capital city of Laos. 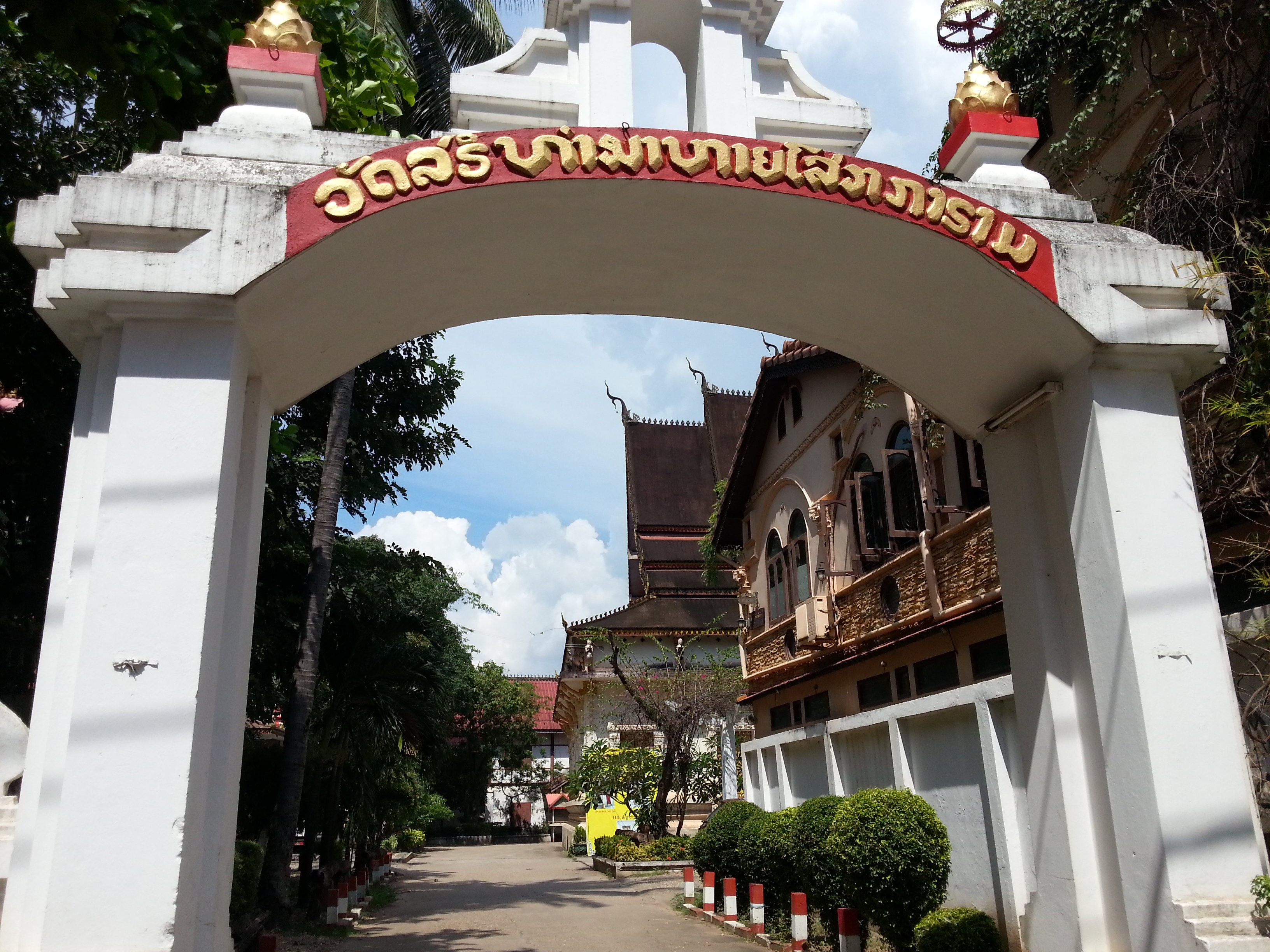 Wat Ong Teu takes its name from the bronze Phra Ong Teu statue which is located in the main temple building, the ordination hall or ‘sim’ as it is referred to in the Laos language.

Wat Ong Teu is working temple with a number of buildings and statues within its grounds. Like most temples in Laos, Wat Ong Teu is open to the public to wander around during daylight hours and no admission fee is charged. The Supreme Patriarch of the Laos Buddhist church resides at this temple which has been a dedicated centre of Buddhist learning since the 17th Century. 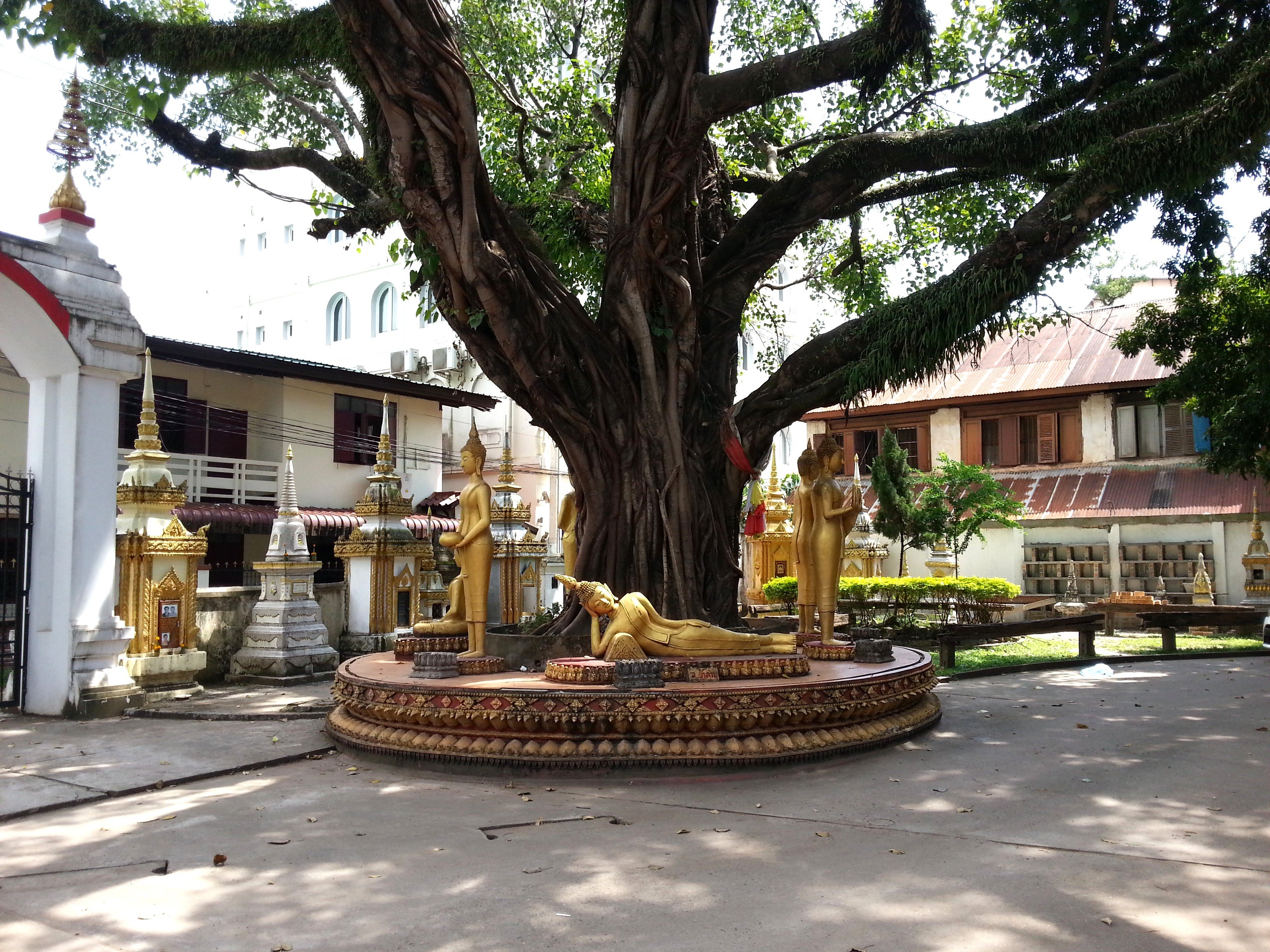 Buddha statues under the bodhi tree

The main temple building at Wat Ong Teu was originally constructed during the reign of King Setthathirath I at some point between the time when Vientiane became the capital city in 1563 and the year when he was murdered in 1572 by his own courtiers. None of the original temple buildings stand today, as they were destroyed along with nearly all the other temples in Vientiane by the Siamese Army who invaded in 1827 and then spent almost a year in the city literally smashing it to pieces and killing or enslaving its residents. 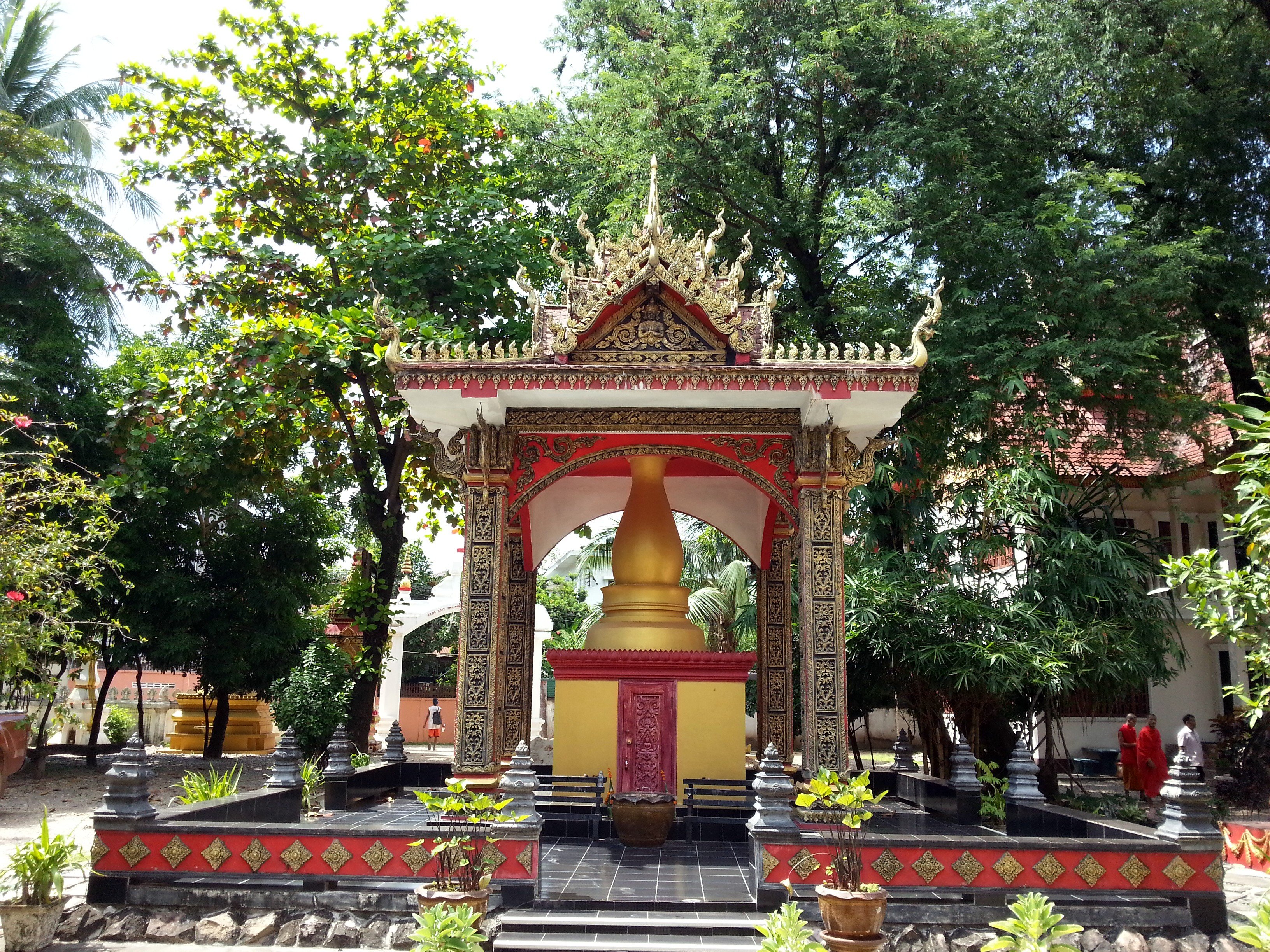 The building and shrines at Wat Ong Teu were all constructed over a period of time from 1900 with encouragement from the French colonial government who were keen to rebuild the fabric of Laotian society with a view to making the country a more economically prosperous part of their Indochina Empire. The French colonialists pretty much failed at their attempts at the economic revival of Laos, but Wat Ong Teu flourished under French patronage and because the The Lao Buddhist Institute in 1929. This temple remains very much at the centre of the teaching of Theravada Buddhism in Laos. 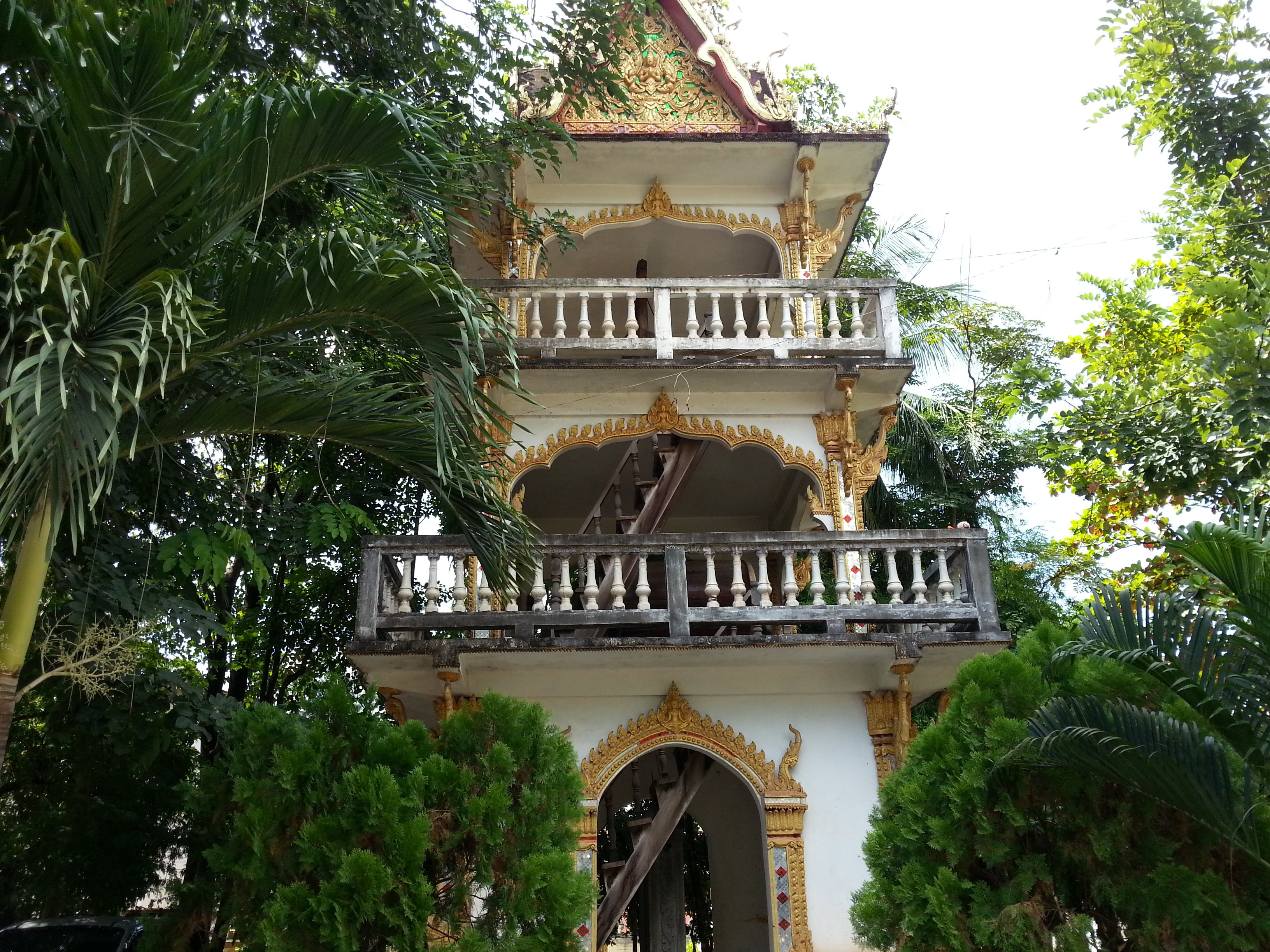 At a first glance, Wat Ong Teu appears to be an eclectic mix of buildings, shrines and statues clustered around the main temple building. To an extent that it is true. Wat Ong Teu is in a way a ‘religious village’ with different structures serving different practical and symbolic purposes. There are places where people live, learn, eat and pray. 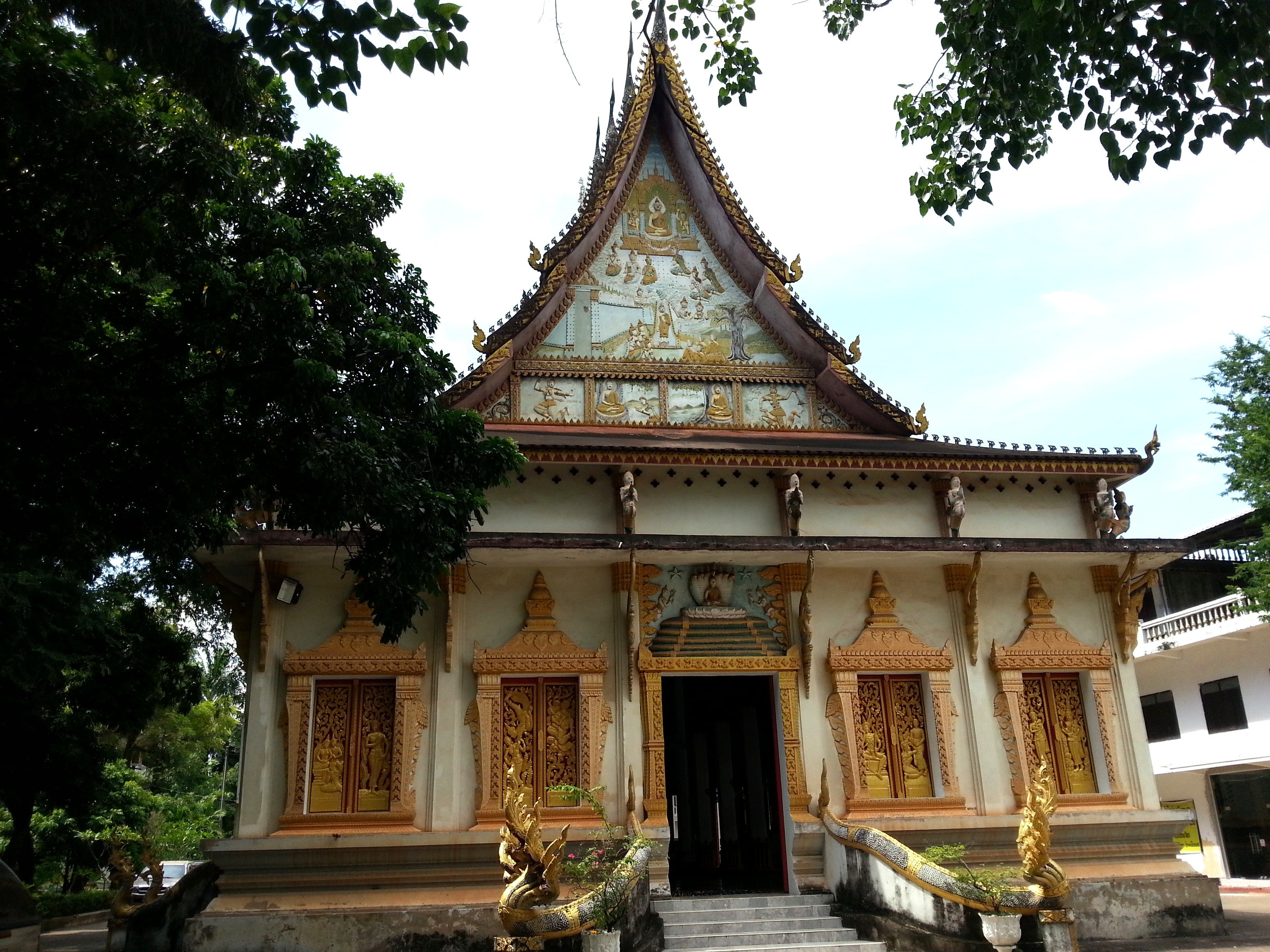 Front of the ordination hall at Wat Ong Teu

However, on closer inspection of Wat Ong Teu there are recurring design motifs from main temple building which are repeated in the drum tower, the stupa, the monks’s living quarters and other parts of the temple. 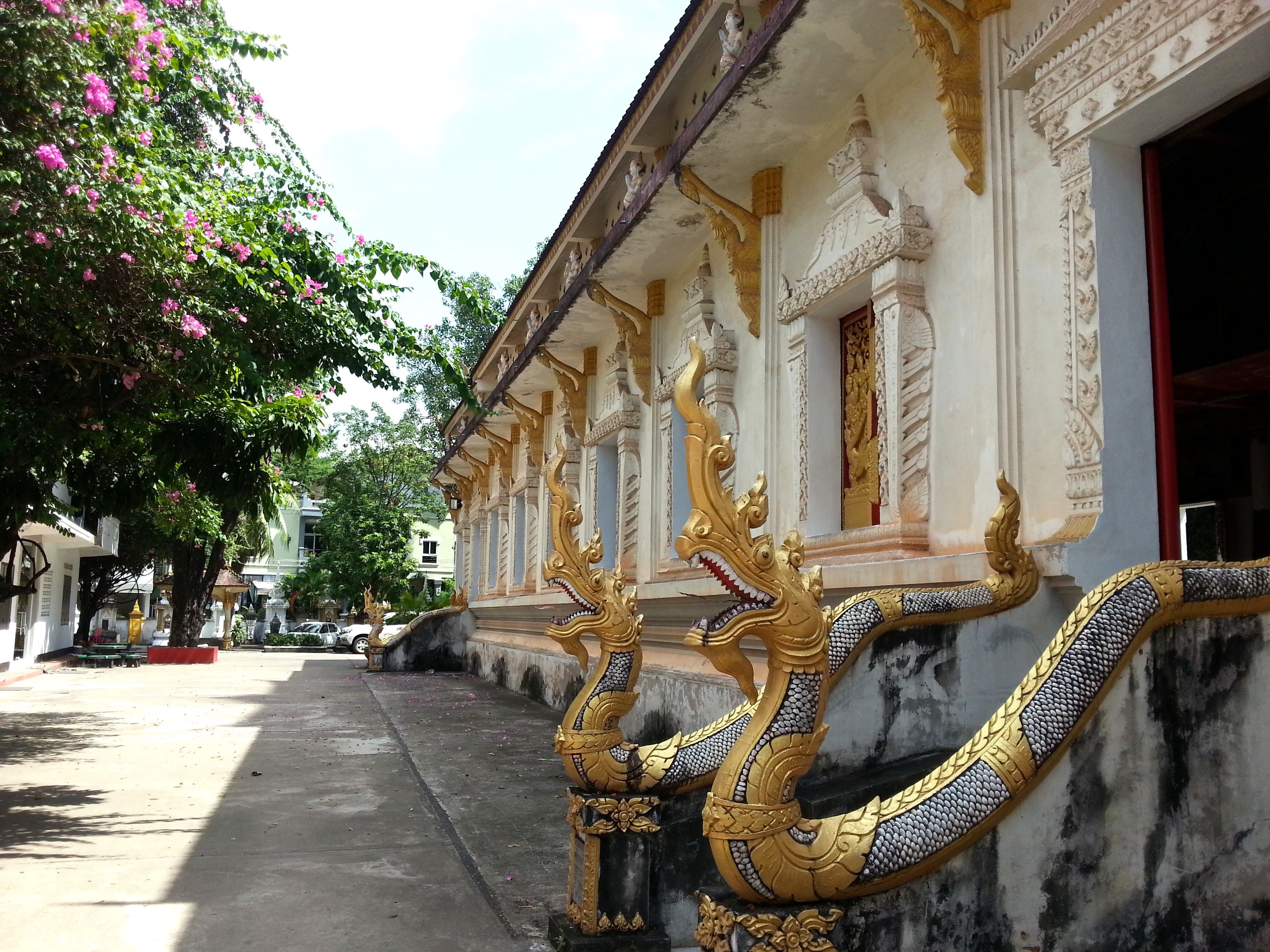 Side of the ordination hall at Wat Ong Teu

The main and most important features of Wat Ong Teu are the three Phra Ong Teu statues in the main ordination hall. The Phra Ong Teu statues are heavy Buddha statues cast from a mix of metals, the predominant one of which is bronze. South East Asian Buddhists place a lot of significance in the way the Buddha statues are posed and how the Buddha is depicted, as the different poses and styles each have a deep religious or symbolic meaning. The Phra Ong Teu statues at Wat Ong Teu have characteristically long fingers and toes, long ear lobes and a wide sharp nose. These features are closely associated with ancient Indian style of depicting the Lord Buddha. Buddha statues elsewhere in Laos are significantly stylistically different

The internal decor of the ordination hall at Wat Ong Teu is impressive and befitting as a backdrop to the three important 16th Century Phra Ong Teu statues. The ceiling and upper sections of the walls feature paintings relating to the life of the Buddha, in particular relating the events which occurred during the 7 week meditation session during which he achieved enlightenment. 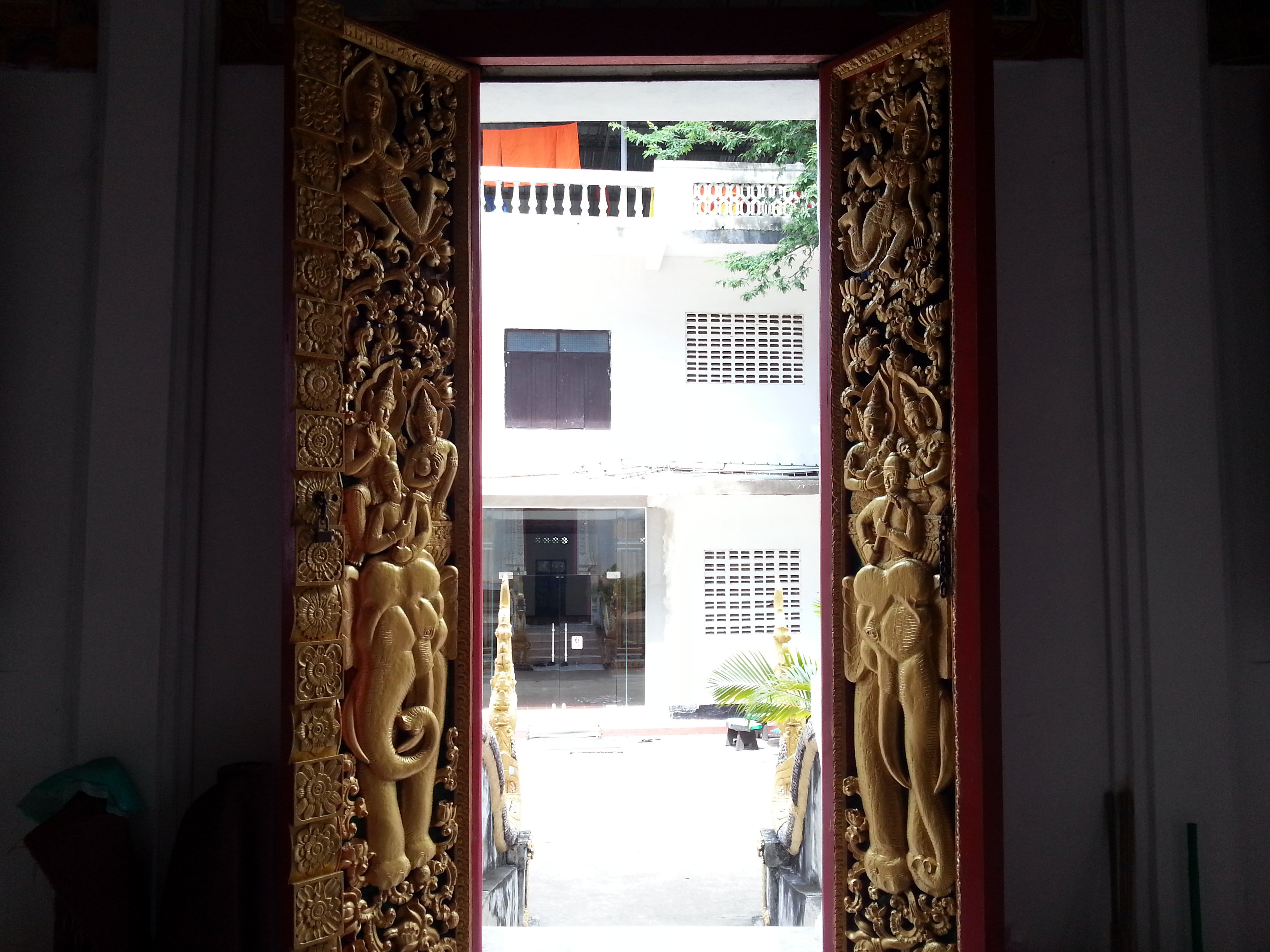 As you wander around Wat Ong Teu we recommend that you look closely as there are lots of artistic masterpieces, such as the elaborate doors on main temple, which have been incorporated into the structure of building. These amazing pieces are work are not signposted in any way and are largely undocumented so the only way to find them is by looking for yourself, rather like the enlightenment that Buddhists seek.

Wat Ong Teu is located on the Rue Setthathilath in Vientiane.