Wat Xieng Thong is one of the most impressive of the many temples in Luang Prabang, located in a prime position near the bank of the Mekong river. If you only visit one temple in Luang Prabang then this is the temple to go to. 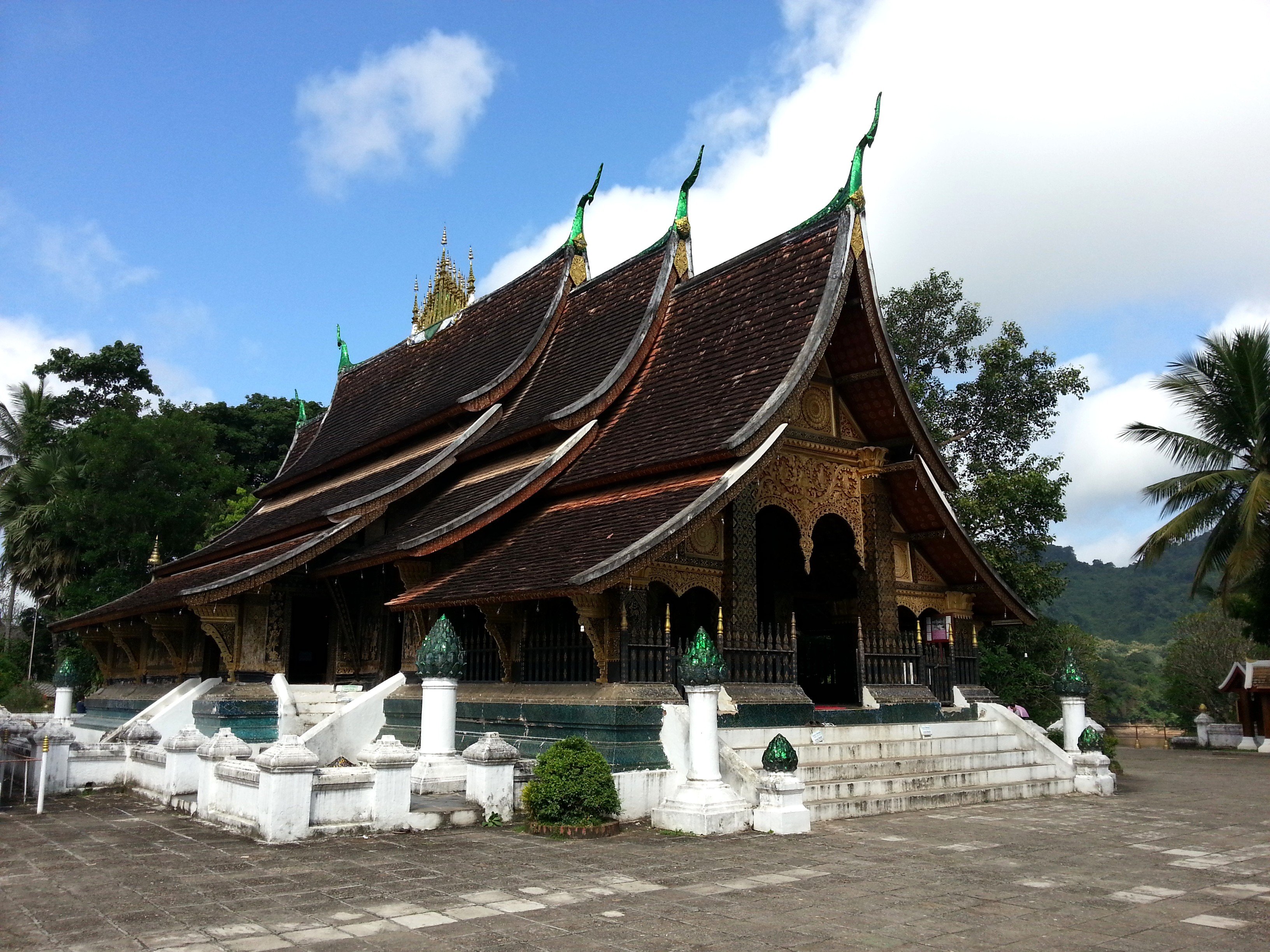 Wat Xieng Thong is the oldest intact major religious building in Luang Prabang. The temple was built in 1559 and survived the destruction of much of the rest of the city in 1887 by the Black Flag Army of brigands from China because, according to legend, the leader of this private army had studied at the temple as a novice monk during his youth and retained a sense of affection for the temple, which he used as his command centre whilst robbing the city of its riches, burning other buildings and enslaving the local people. 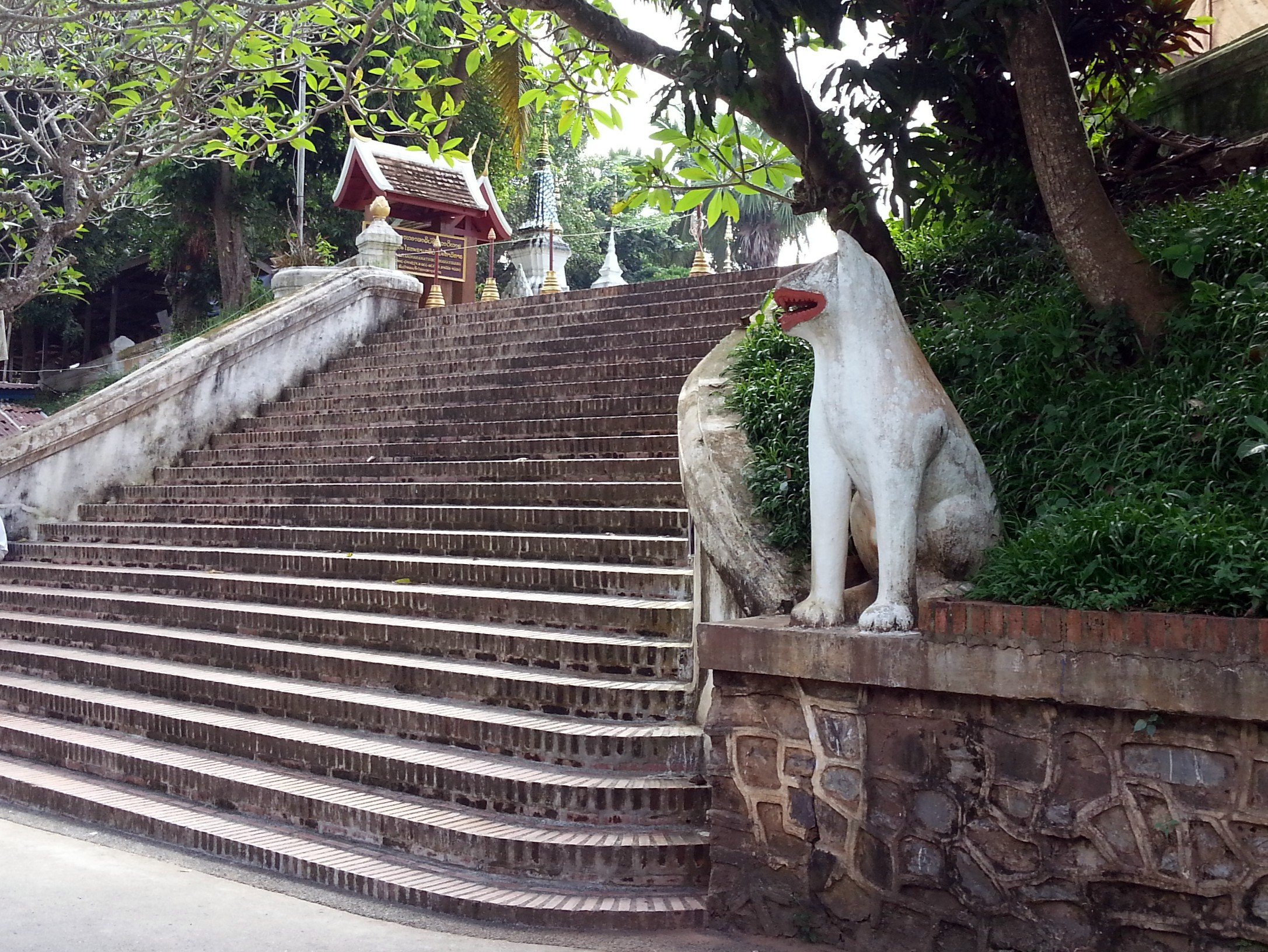 Wat Xieng Thong consists of several impressive buildings within the grounds of a working temple. Monks live here and worship alongside the many tourists who visit to. Wat Xieng Thong was also used extensively by the Laos royal family who were crowned at the temple until the dissolution of the Laotian monarchy in 1975. Wat Xieng Thong was in effect Laos’s version of Westminster Abbey in London. 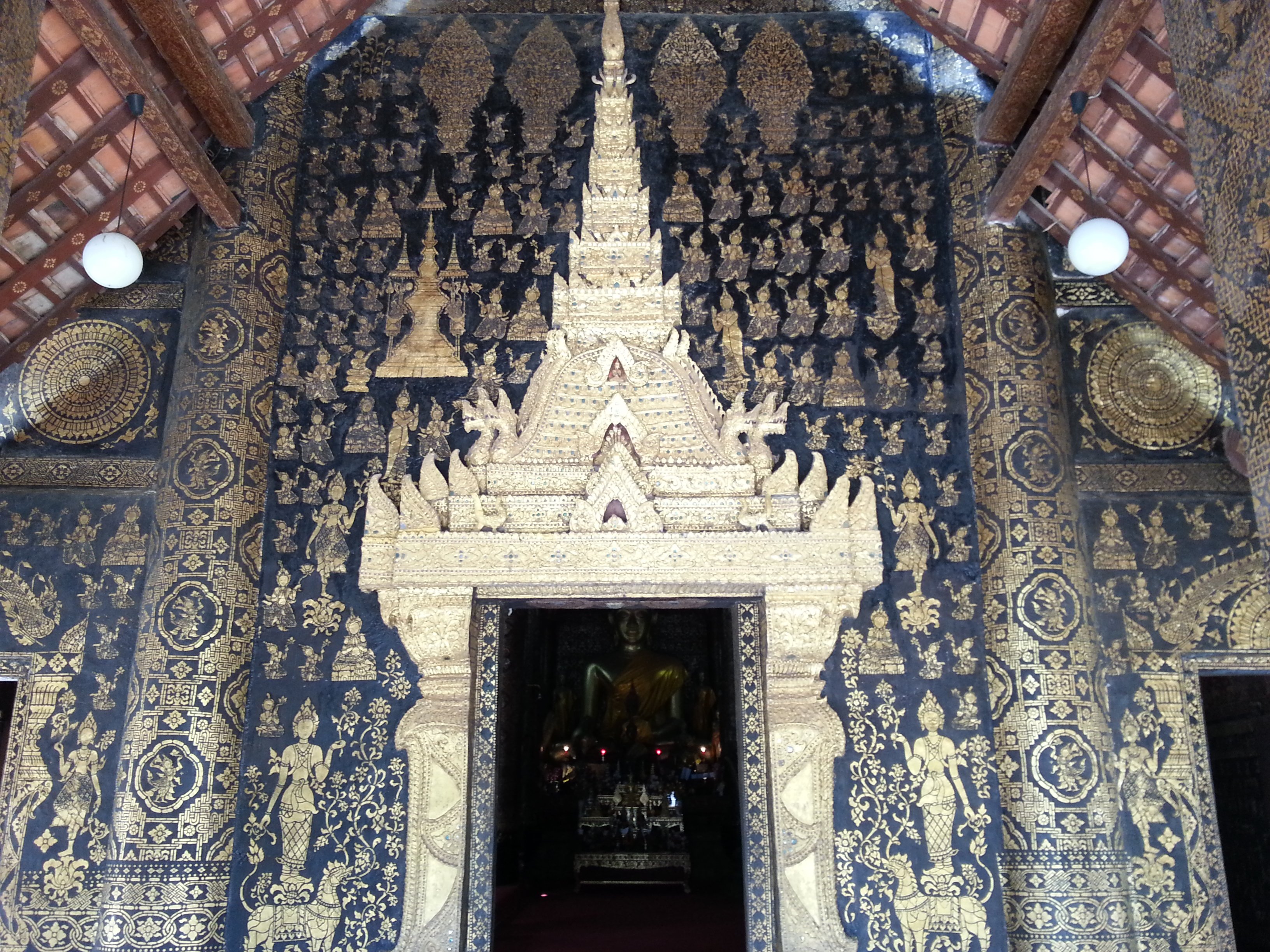 Doorway to the congregation hall at Wat Xieng Thong

The main temple building at Wat Xieng Thong is the congregation hall or ‘sim’, as this part of a temple is known in the Lao language. The sim has undergo a number of refurbishments over the years, it is a made of wood and therefore need constant maintenance, however, the building is essentially still the same one that was constructed in 1559. 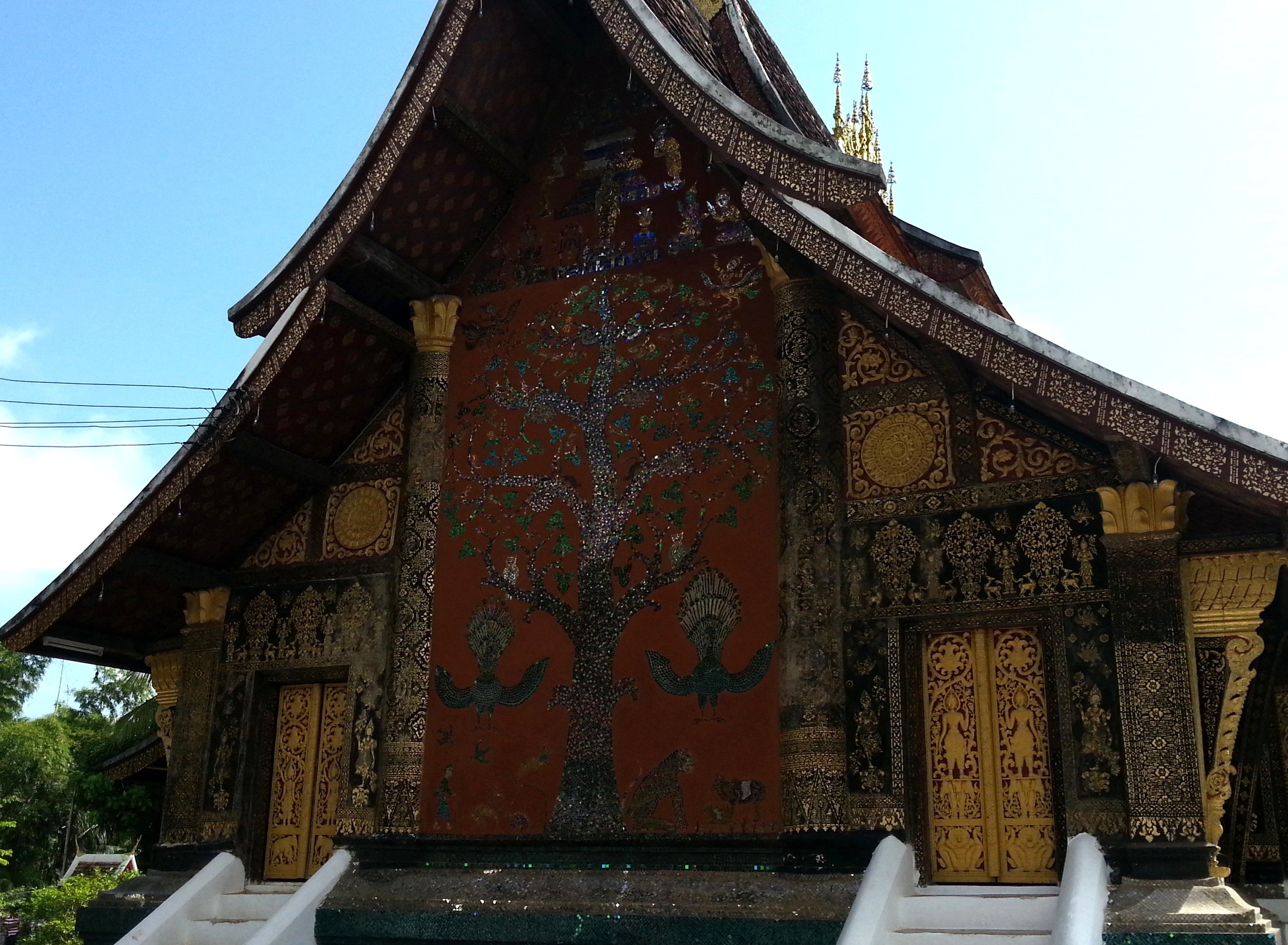 The exterior of the sim is elaborately decorated. The multi-tiered sweeping roof is the classic example of Laotian temple architecture which all other Laos style temple roofs are based on. The wooden exterior also features amazing stencil work in gold leaf on all sides. The ‘Tree of Life’ mural on the rear of the temple is a later addition dating back to the 1960s, depicting the Lord Buddha, a tiger, an ox, and two large peacock under a glistening tree. 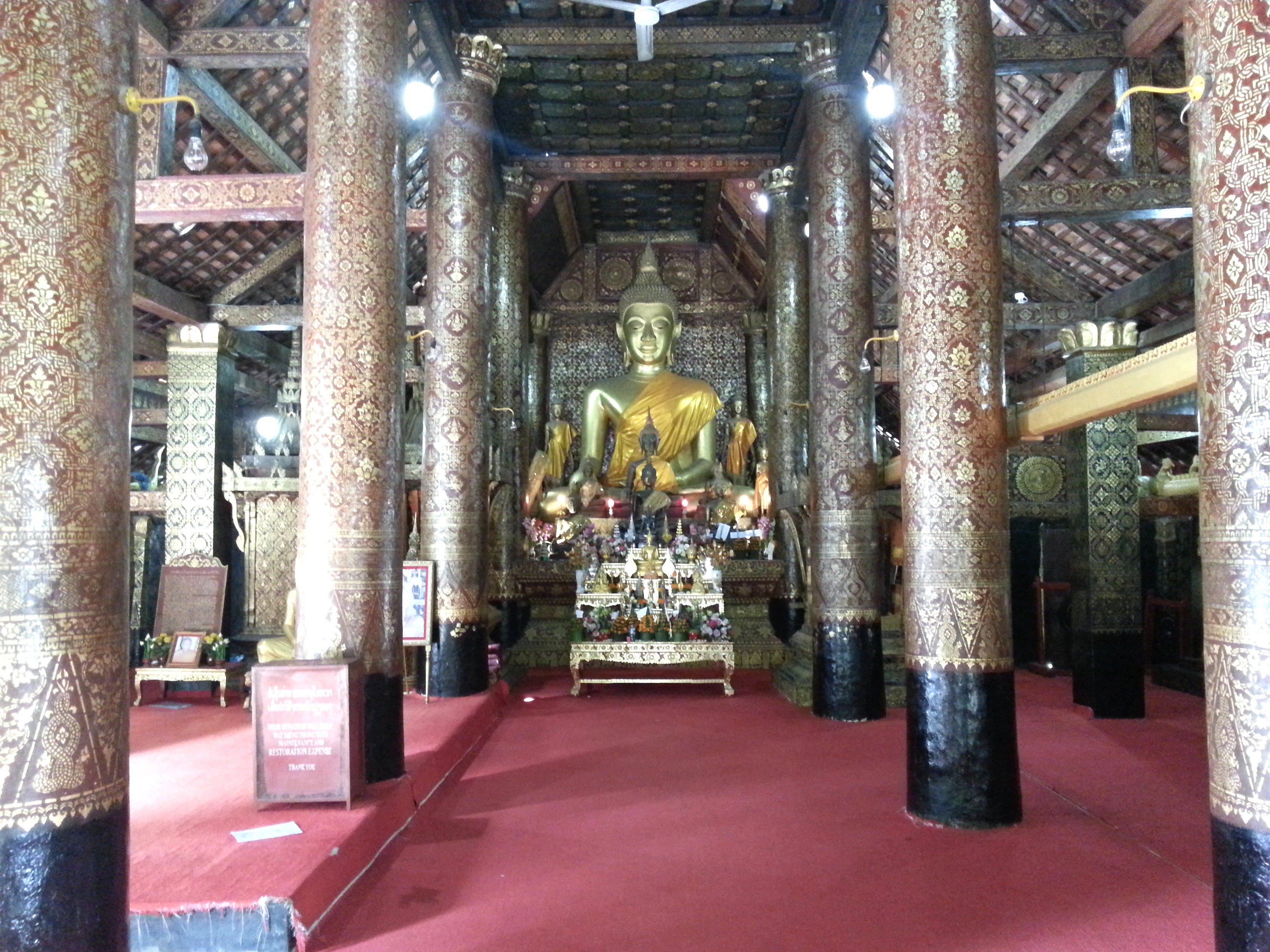 The stencil work is continued inside the sim, which houses the main Buddha statue. The large teak pillars supporting the roof are particularly striking with black lacquer forming a contrasting background to the floral designs in gold stencil work. Like many other later temples in Laos, scenes from the life of the Lord Buddha are painted on the walls and the ceiling. Another example of how Wat Xieng Thong has been used a model for the design of other temples in Laos. 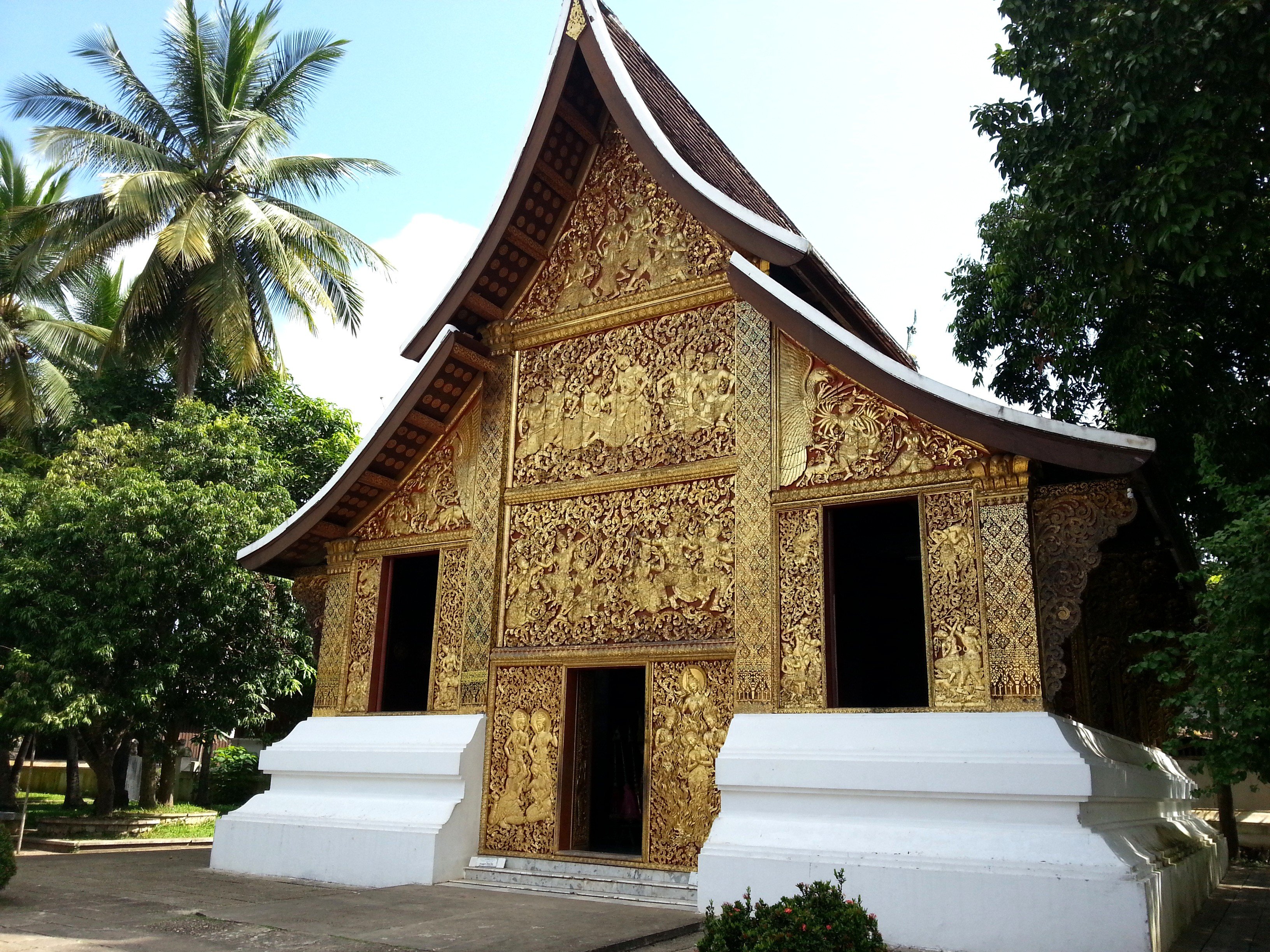 Front of the Chariot Hall at Wat Xieng Thong 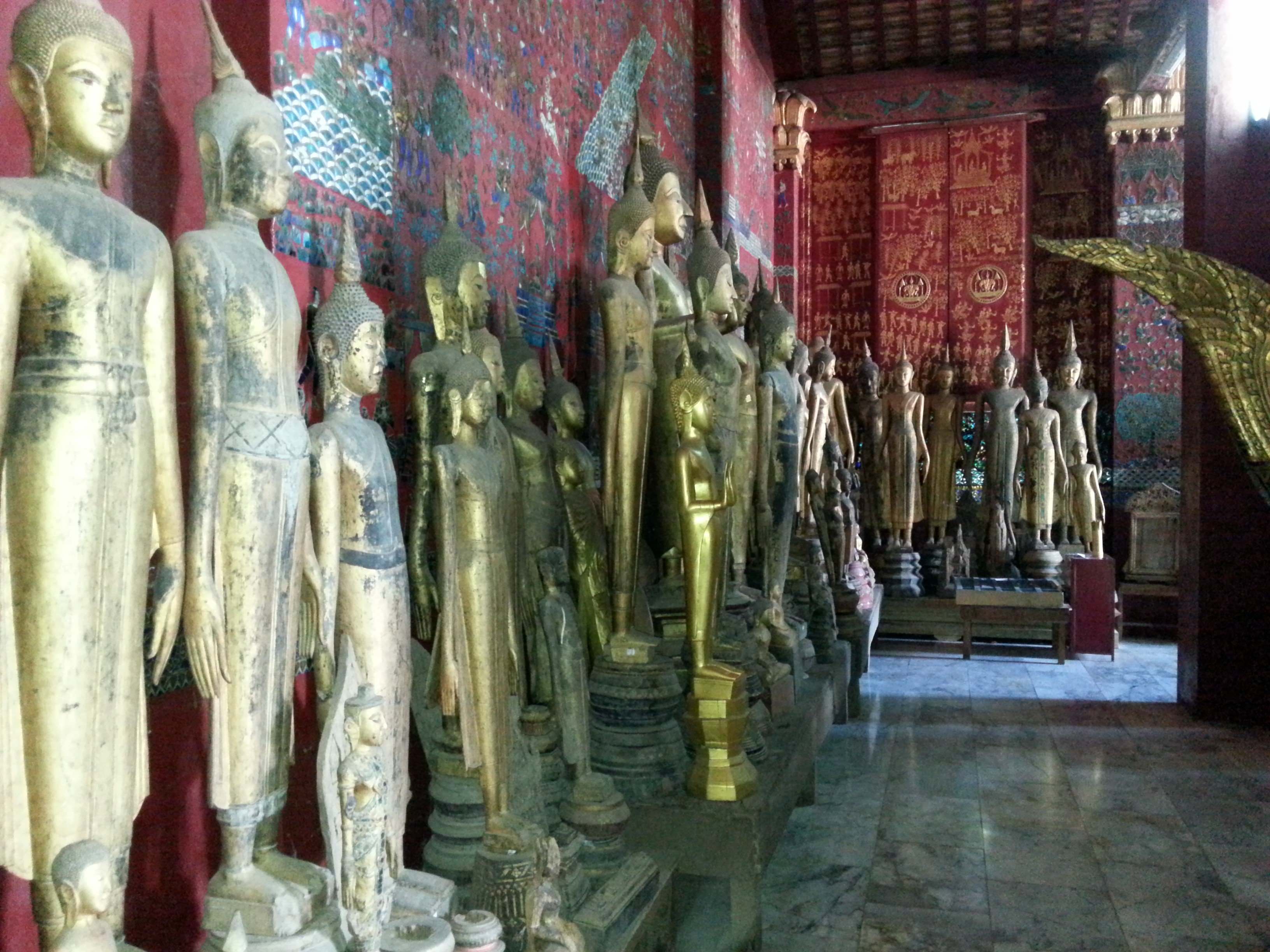 Buddha statues in the Chariot Hall

The other impressive buildings to look out for at Wat Xieng Thong are to the left side of the the congregation hall. The first of these buildings is the golden Chapel of the Standing Buddha. This is one of the original temple buildings housing, as the name suggests, a large statue of a standing Buddha. 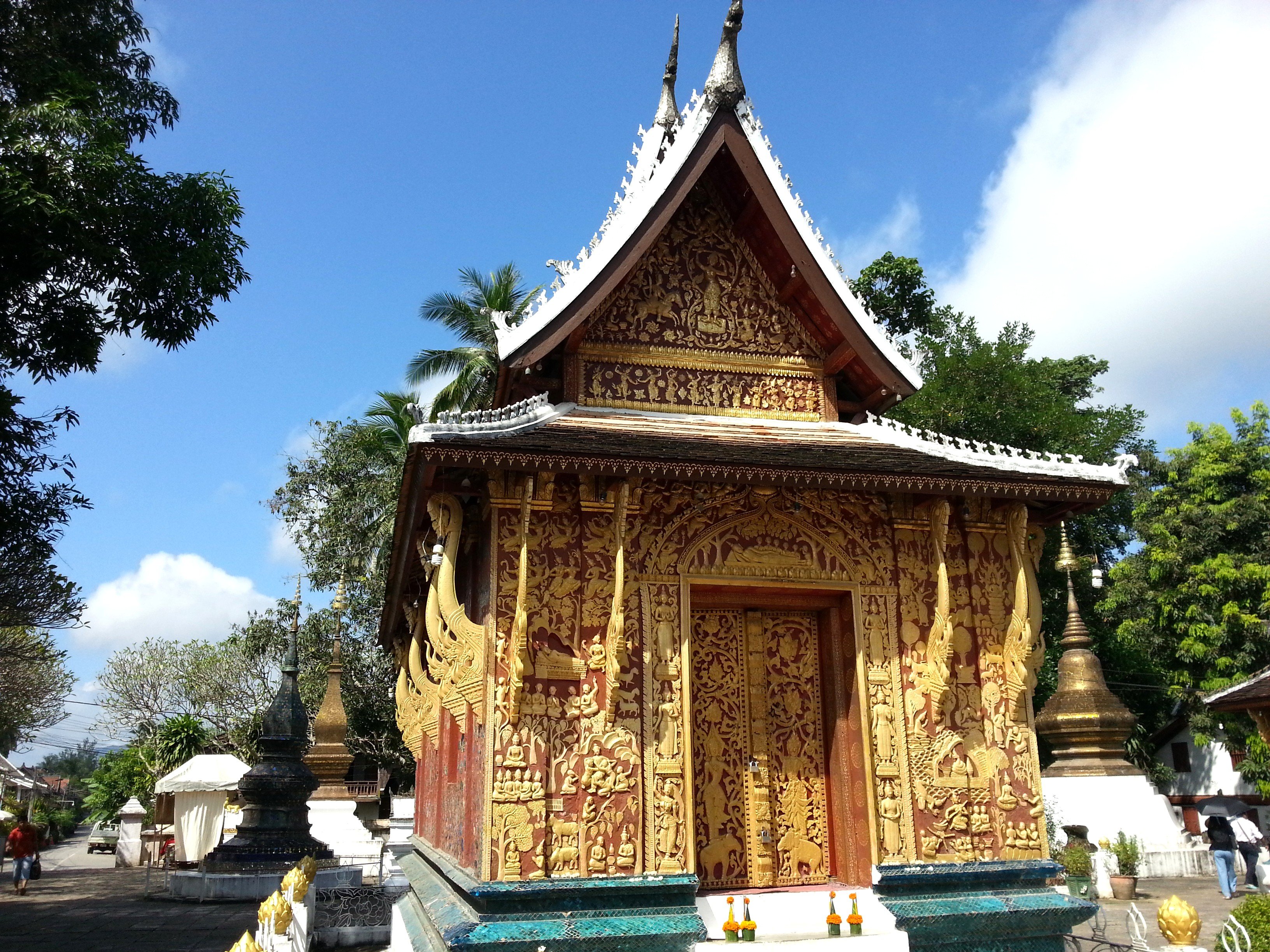 Chapel of the Standing Buddha at Wat Xieng Thong

Behind the Chapel of the Standing Buddha is the Red Chapel, which was constructed in 1569. The mosaics on the outside of the building were added in the 1950s to commemorate the 2,500 year anniversary of the Lord Buddha achieving enlightenment. This temple is particularly significant to Laotian people who walk around the temple holding lotus flowers in an act of devotion. 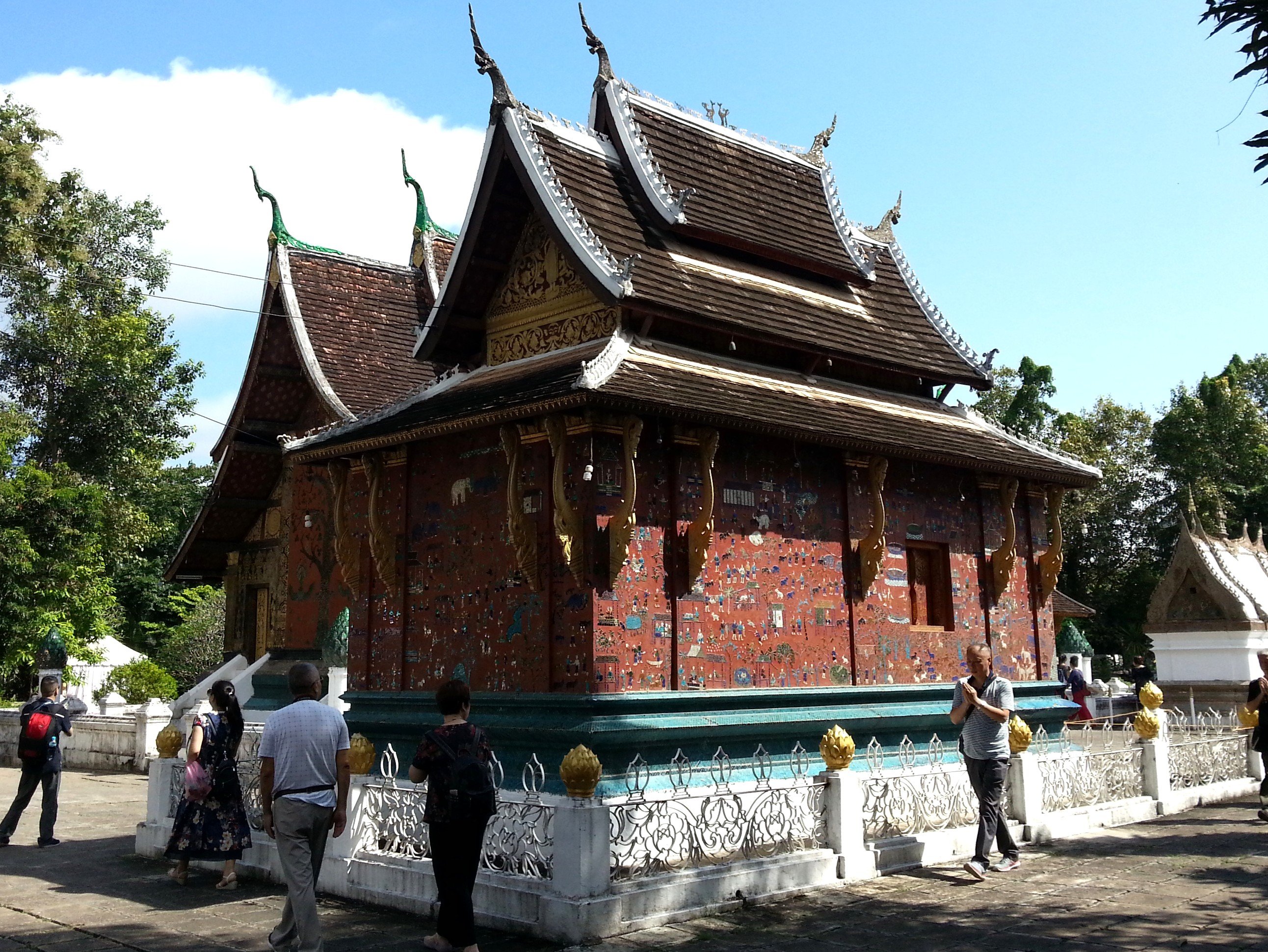 The third significant building, behind the Red Chapel, is the Ho Trai which is a library housing the Tripitaka. The Tripitaka are the ancient manuscripts o Buddhism written largely in Pali, which is a sacred language used by the Buddhist clergy in the centuries immediately following the year of the Lord Buddha’s enlightenment. Similar libraries have been subsequently constructed at other major temples in Laos, such as Wat Si Sa Ket in Vientiane.

Wat Xieng Thong is located on the Khem Kong Road in Luang Prabang.